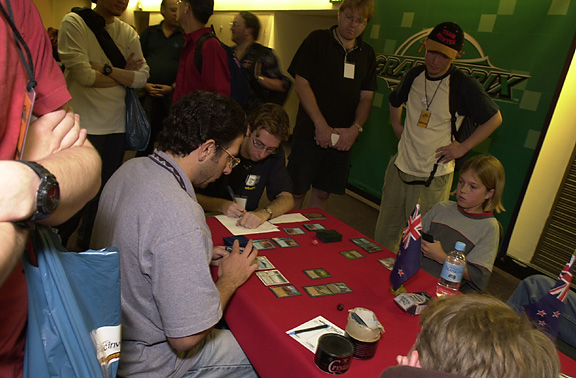 Although not too well known overseas, Cole Swannack is making waves down under. He finished 5th in New Zealand nationals, gaining the title of Limited Champion. He flew in to the GP to play the grinders the night before, but decided to get some sleep and just start fresh for tomorrow, dropping at a 1-1 record. Having won the die roll he chose to play.

Playing the Williams "Obliterwho, Obliterwhat" deck Swannack started off quickly with a second turn Exploration that was Seal of Cleansinged by Bandas and his Oath deck. The two then stalled for two turns on three land but it was Swannack who was first to impulse his way into some land. Although still mana shy Bandas managed to cast some great early spells such as Oath of Druids and Sylvan Library, which he had to Force of Will into play. Swannack untapped and dropped his own Oath of Druids, which would lock down the board for what turned out to be the rest of game 1. With the two players still digging deep in their decks for mana, Bandas was the first to increase his chances of winning when he dropped an Abundance, which of course when combined with Sylvan is broken. Despite drawing three cards a turn, Bandas was unable to capitalize on his advantage, possibly because he was unaware of the key card in this match up, Treetop Village. With the Village down, the Williams deck has no way to deal with it main deck, besides Obliterate, and if the Oath player attacks the Exploration, the recovery time after the Obliterate is too slow. In a long game that eventually resulted in a draw, both players traded back and forth Crater Hellions via Oath of Druids, unable to push through enough damage for the kill.