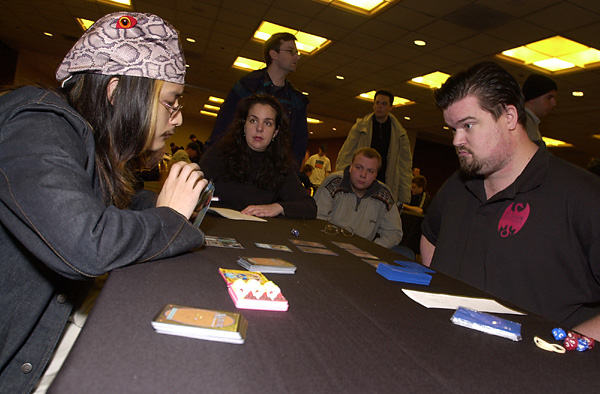 The first round of the Master's draft pitted American Darwin Kastle against Japan's Satoshi Nakamura.

Darwin Kastle, a 29 year old from Medford, Massachusetts, is a perfect example how the master's series has enabled some top level players to truly go "pro." The extra money provided by the Master's series gave Kastle the incentive he recently needed to leave his job as manager of Your Move Games and pursue Magic as a full time career. He is best known as the man behind Avalanche Riders, the card he designed for winning the 1997 Magic Invitational. He is co-champion of Team Pro Tour - Washington DC, winner of Grand Prix - Manchester, and has several other Pro Tour Top 8s to his credit.

Kastle's draft strategy was determined before he ever sat down at the table. He planned to draft his favorite archetype: fast red-black beatdown with lots of removal and early plays. He feels that this archetype is one of the most powerful decks in Invasion draft, and that it is a relatively easy archetype to force because many of the deck's important cards (like Hooded Kavu) come as late draft picks. After the draft, Kastle was ecstatic with his deck. "It's ridiculous," he said. "I expect to beat the crap out of people with this deck." His draft was characterized by creatures with high power to casting-cost ratios, like Shivan Zombie, Kavu Aggressor, Viashino Grappler, and Vicious Kavu. For removal, Kastle had Scorching Lava, Assault & Battery, two Cinder Shades, Exotic Curse, Shivan Emissary, Breath of Darigaaz, and two Plague Spores. Kastle felt that the only thing his deck may have been missing was the quintessential red/black removal spells, Soul Burn and Agonizing Demise. 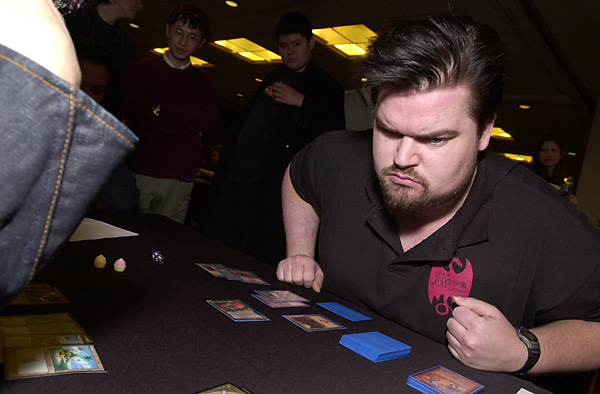 atoshi Nakamura, best known as "The Hat Man," is a 31 year old from Tokyo, Japan. He is easily the best accessorized man in Magic, wearing a different hat to almost every tournament. He told me that the snake-skin cap he is wearing today, complete with eyes and fangs, is good luck because it was recently given to him by friends. Nakamura is the 1998 APAC Champion, winner of Grand Prix Sapporo, and is fresh off a Top 4 at Grand Prix Sydney.

Unlike Kastle, Nakamura did not have a predetermined draft strategy. He prefers to draft blue, but feels that Invasion is a very balanced set and "all colors can win." The direction of Nakamura's draft was determined by his first pick overall, Phyrexian Infiltrator. This black creature, whose potentially brutal special ability requires heavy blue, meant that Nakamura was looking to pick up black/blue from the outset. His deck was characterized by the bounce, discard, and cantrips typical for these two colors, with a splash of red for a few creatures and removal spells. His early drops included Dream Thrush, Tidal Visionary, and Ravenous Rats, followed by more heavy-hitting creatures like Faerie Squadron and Vodalian Serpent. He hoped to gain card advantage through Repulse, Exclude, Recoil, Hypnotic Cloud, and Sleeper's Robe, and his removal, although limited, was of high quality: Soul Burn and Barrin's Spite. Nakamura's feeling about his draft were mixed. "I wanted more bounce and a Probe," he said. "My deck is a little weak, but I can win."

Nakamura won the roll and chose to play. After agonizing over his hand and appearing to do some mental calculations, he took a mulligan. It appeared in the early game that his mulligan may have hurt Nakamura significantly, as the only creature he cast in the first 5 turns was Dream Thrush. Kastle, meanwhile, came out quickly, dropping a Rage Weaver, Hooded Kavu, Shivan Zombie, and Phyrexian Slayer on turns 2, 3, 4, and 5. Nakamura started to stabilize by dropping a big blocker, Faerie Squadron, and then using Tidal Visionary tricks. He turned Kastle's Slayer's blue so that it could be targeted by Plague Spores. Kastle's early offense was shut down by several more blockers, including Vodalian Zombie and Pouncing Kavu with kicker. Just when it looked like Nakamura had achieved board advantage, Kastle killed everything in sight with Breath of Darigaaz. After this "reset button," Kastle resumed with more 2 and 3 drops, but Nakamura had a Phyrexian Reaper and his Barrin's Spite ready to go. After several back and forth swings to the game, Kastle was at 6 life, his only creature a Shivan Zombie, and Nakamura was at 5 with no non-land permanents. On Nakamura's next turn, it was clear that he had no good answer in his hand: he cast Cursed Flesh on the Zombie, hoping to buy a few more turns. Those turns proved to be critical. After Kastle attacked once with the 1/1 Zombie, bringing Nakamura to 4, The Hat Man cast a Vodalian Serpent with kicker and a Phyrexian Slayer. While holding the ground with the Serpent, Nakamura hit Kastle 3 times in the air with the Slayer, winning game one. Of note, neither Kastle nor Nakamura noticed until after the match that the Cursed Flesh that made Kastle's Shivan Zombie a 1/1 also gave it fear. Had Kastle attacked with the Zombie, Nakamura would have been unable to block with his Serpent.

Kastle chose to play and Nakamura again took a mulligan. Kastle's deck was again the faster of the two, and Nakamura was at 14 life before Kastle had taken any damage. But just as in game 1, Nakamura was able to buy the extra turns he needed to get to his more powerful spells. He forced Kastle to cast his Firescreamer 3 times, by bouncing it back to Kastle's hand with Recoil and then with Barrin's Spite. Again as in game 1, game tempo swung back and forth between the two players, and both were low on life at 6 apiece. The game breaking turn was when Nakamura drew his first pick overall, the Phyrexian Infiltrator, with eight mana to use it. Every turn from then on, Satoshi used the Infiltrator to take Kastle's best creature in exchange for his own worst creature. Nakamura dealt finishing damage with Kastle's own creatures and a lethal Soul Burn.