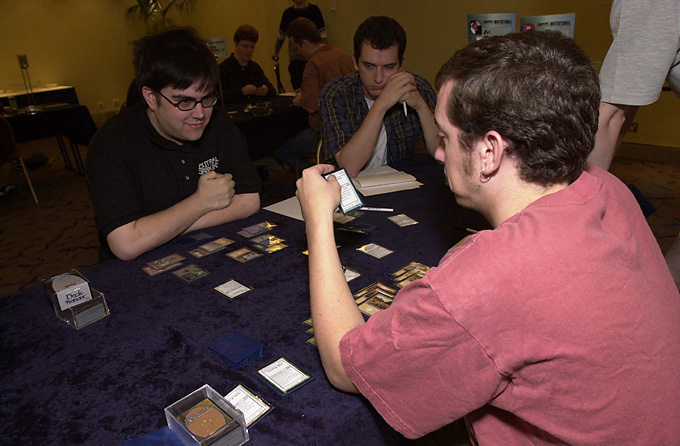 Dave "I got nothing" Price looked very resigned as he sat down across from Zvi "Chuckles" Mowshowitz. Dave was not confident in his deck building decisions, in particular his decision to include Survival of the Fittest in his self-described "green/white beatdown deck". Zvi chose to have Dave play first and Dave began beating down with Caustic Wasps on turn two. Zvi brought out Devout Witness on turn four; a card that they both agreed was very important in this format with so many important artifacts including Thran Forge that can turn the Witness into an assassin. Dave used Swords to Plowshares to get rid of the Witness and Zvi drew and played Argivian Archeologist. Dave studied the many untapped lands on Zvi's side and asked, "How much do the counterspells cost in this format?" The modified casting costs made the players rethink all their standard assumptions.

Zvi shows him how much one of the counterspells cost by using Forbid (2UU) with the buyback to counter Dave's Herald of Serra. Dave looked at the Thran Forge that Zvi discarded and the Archeologist in play that could bring the Forge back to his hand and suddenly realized that Zvi had gotten him in a Forbid lock on turn six of a limited event!

Dave seemed to be in an unwinnable position as Zvi drew his fourth Island and systematically Forbid the next few threats. Zvi even drew a second artifact to discard so the buyback was basically free and the lock was total. He essentially just had to get one cheap threat and he could easily win the game!

Zvi, however, did not want the easy win as he tapped all but two lands to play Triskelion. The Triskelion allowed him to destroy Dave's Tracker as well as the Caustic Wasps that were still smacking him around. Dave was very surprised to suddenly be able to cast a spell and used Survival (which Zvi did not counter earlier) to get a Triskelion that made quick work of the suddenly vulnerable 1/1 Archeologist.

Zvi, apparently deciding that being able to Forbid with buyback was giving him too much advantage, inexplicably cast Taniwha so that he would have no land every other turn. The next time all his lands were phased out, Dave cast Nevinyrral's Disk to bring down the 7/7 monster. Zvi answered with Tawnos' Coffin so he could save a creature, and when Dave destroyed all non-land permanents the next turn Zvi put his Raven Familiar into the Coffin so it would be back in play the next turn. Dave searched out Tetravus with Survival in response to activating the Disk inciting Zvi to comment "Tetravus? You're not supposed to be playing with that" to which Dave responded "So I've heard." It turns out Dave is the only player using the slightly overcosted eight casting cost Tetravus in his supposed beatdown deck.

Zvi cast a Disk of his own the next turn, and had the Raven Familiar as a blocker for the Tetravus. Dave drew a card that wasn't the Berserk he needed when suddenly Invitational MVP pointed out that Zvi didn't pay echo on the Raven Familiar. While come-into-play effects do not trigger off phasing (which is how the Coffin is now worded), echo costs still have to be paid. Paul Barclay and Head Judge Mark Rosewater discussed the issue for a couple of minutes and decided that as a turn has passed, it was too late to go back and destroy the familiar. Zvi did have the eleventh mana in hand to pay the echo and cast the Disk, but he was unaware of the phasing/echo interaction.

With the Raven Familiar to block the Tetravus, Zvi activated the Disk and cast Triskelion. Dave didn't have an answer as he drew Berserk one turn too late and lost game one.

Zvi opened with Exclude, Mana Drain, Animate Dead, Demonic Tutor, Forbid and two lands. With no cheap spells and only two lands, this would be a horrible hand in any other format. But in Rosewater Duplicate, this is a keeper and Zvi comfortably does nothing but lay land until turn six when he casts an Old Man of the Sea to deal with Dave's Caustic Wasp beatdown.

Dave takes the opportunity of Zvi being tapped out to encase his Wasps in Empyrial Armor and attack for eight - bringing the total Wasp damage up to 19 in games one and two. The Wasps would not attack again as their swords were changed to plowshares and they left the game. Dave dropped a Mishra's War Machine and Zvi played a Stronghold Taskmaster and an Argivian Archeologist to block them. But Dave had a Swords to Plowshares of his own and after removing the Archeologist as a blocker, the Machine was able to finish Zvi off in a couple of turns despite Zvi casting Demonic Tutor as he couldn't find anything in his deck to save him. 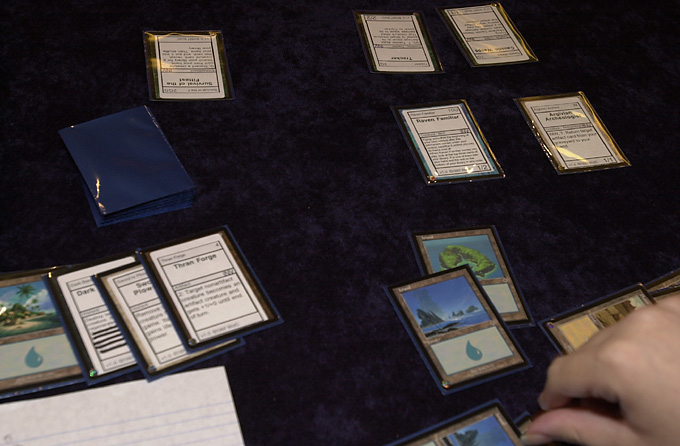 Due to the length of the first game, all the other matches were completed before the third game began and a crowd gathered to watch. Again Zvi chose to have Dave play first as the format is incredibly slow and Zvi wanted to make sure he drew lots of land for his expensive spells. Zvi's opening hand was flush with land as he drew six land and Animate Dead. Having already declared that he would keep a six-land hand if given the opportunity, Zvi chose to keep, despite having absolutely no plays against Dave's theoretically aggressive white/green deck.

Both players just play land until turn three when Dave burst out of the gates playing not just one, but *two* creatures - Wild Mammoth (which elicited comments of "tight" from the crowd) and Revered Unicorn. Zvi continued to draw land as Dave attacked for five every turn. After commenting "They don't call me the king of beatdown for nothing", Dave finished Zvi off with these first two creatures, holding the Wasps in his hand, as Zvi laid down his hand of five land, Animate Dead and Forbid with six additional land in play and conceded