Round 1 Feature Match (Every match is a feature match!): Mike Long vs. Gary Wise

Round two saw USA's Mike Long play against someone who has been referred to as "Canada's Mike Long" - Gary Wise. Both players are known for entertaining antics and off the scales charisma, which promised an exciting match. When asked if he felt confident, Mike responded, "I feel something". Mike seemed extremely calm and mild-mannered as he played while Gary was not nearly as relaxed has he had been in his first round match with Chris Pikula. 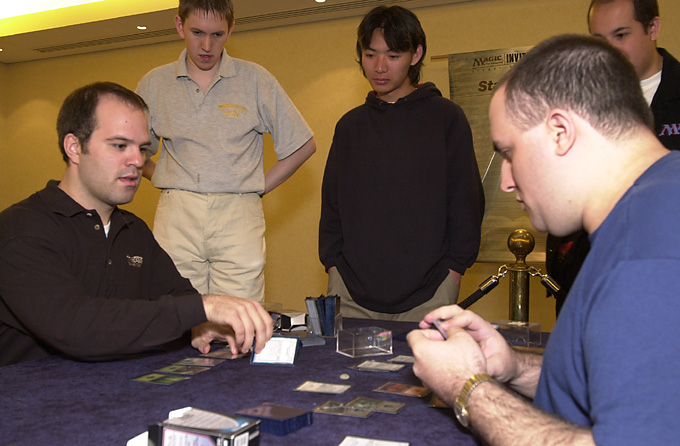 As Mike kept trying to get threats down and active, Gary slowly built up a panorama of enchantments. Eventually he played a Tombstone Stairwell for one black mana that allowed to discard a card to Survival of the Fittest to create five zombie tokens during each players upkeep, which when combined with the Breeding Pit tokens being created each turn, made Goblin Bombardment an extremely useful card as it dealt 11 points of damage a turn to his opponent. Mike, seeing the combination, conceded commenting, "Little did I know I would go down to a five card combo".

During sideboarding Gary seemed extremely tense and irritated. The trash talking became a bit more biting with Gary going off about various incidents where Long had not respected him or his associates enough. This prompted Mike to comment, "That Mike's a Jerk" with a smile as he let Gary's comments wash right off him. Eventually Gary let loose with "I thought you were a bit of a jerk" and they began the match with a lot of tension in the air.

As is usual in this format, the first play wasn't until turn three when Mike cast a Black Lotus and Gary responded with Goblin Bombardment. Mike, making use of the traditional fast mana of the Lotus, sacrificed it to cast a turn four TANIWHA! Mike was very excited about Taniwha as he let out a throaty "Taniwha" every time he attacked with it. Gary had the answer to Taniwha with a fourth turn Abyss, but Mike's Emerald Charm allowed Taniwha to stick around. Gary played Breeding Pit, giving him the "creature a turn" plus Goblin Bombardment combination on turn six. 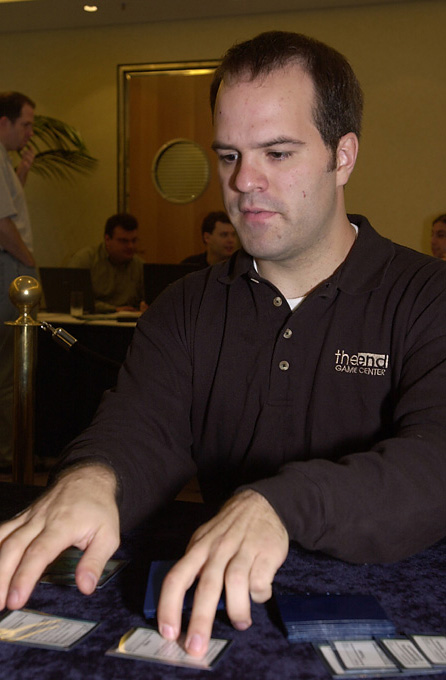 Breeding Pit tokens do little against a 7/7 trampler as Taniwha came over to hit Gary. It looked like Mike would have the win on Taniwha's third attack but a Dark Banishing suddenly reset the board. Gary played Mishra's War Machine and Mike answered with Maro. Instead of banding with a Breeding Pit token, Gary instead chose to run the War Machine into the 6/6 Maro and then sacrifice it to do the final point. With Mike at over fifteen life Gary decided he had to win through Bombarding him with Breeding Pit tokens as he wasn't drawing any other threats.

Mike cast a Hunting Moa and Gary forgot that he could respond to the +1/+1 token by shooting the Moa with two Breeding Pit tokens so that one of his other Breeding Pit tokens could get the "when it leaves play" +1/+1 counter. Mike Excludes Gary's Moa and Mana Drains a Bone Shredder to keep board control as he destroys one blocking Pit token a turn with the Moa. Mike finally drew into enough mana to cast Arctic Wolves and Clone on the same turn as well as Forbid Gary's Hell's Caretaker, and Gary was unable to block the ever-increasing hordes of giant green creatures.

Mike began game three with Devout Witness, Emerald Charm, Arctic Wolf, Nevinyrral's Disk, Exclude and two lands. His first play was a third turn Black Lotus followed by a mana-accelerated turn four Arctic Wolf. Gary had the answer with a giant Maro that the Wolf was forced to chump block. Gary followed the Maro with a Mishra's War Machine as Mike stalled on four lands and was only able to cast Devout Witness. Gary had the Bone Shredder he needed and attacked for 10 on turn eight to win the match. A very anti-climactic finish to an exciting match.