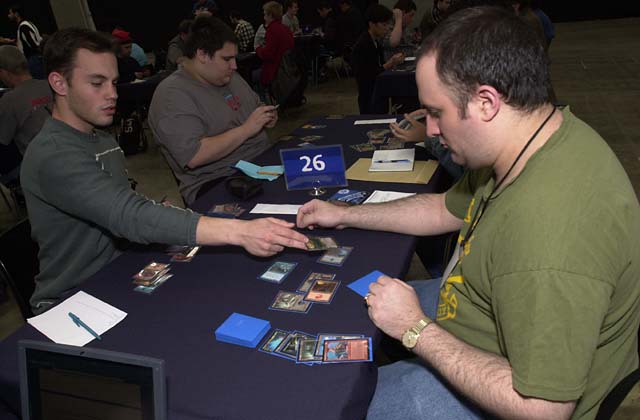 Two of the top Limited players in the World met in the first round of the Pro Tour here in Barcelona. Gary Wise hails from Canada and is well-known for his analysis of how to draft new sets which are regular features on The Sideboard. Antoine Ruel is French, and has performed very well on the European Grand Prix circuit this year - his notable results include a win in GP-Porto.

Antoine Ruel was two places to Gary Wise's right, and so his picks had at least some effect on Gary's deck. The first booster gave Wise an interesting choice between Zanam Djinn and Yawgmoth's Agenda. When Invasion first came out, the Agenda was regarded as one of the most broken cards in the set, but players have begun to devalue it slightly after months of practice in the format. Nevertheless, it is probably better than a six-mana creature, and so Gary took it.

The player to Gary's right had first-picked Plague Spitter, and Antoine Ruel had taken Do or Die. He took the card over Probe, so it probably signaled an intention to go Red-Black rather than Red-Blue. He also passed a Fires of Yavimaya, which was a good signal to the player between him and Gary to go Red-Green, despite picking the Plague Spitter.

The first few boosters that Gary looked at didn't really give him a chance to switch away from black, as his picks were Stormscape Master, Probe and Recoil. Antoine had a choice between Shivan Zombie and Faerie Squadron for his second pick, and confirmed that he preferred Red-Black by taking the 2/2. Antoine was forced to branch out into three colors immediately since the only good card in his third booster was a Tower Drake, and his fourth booster held nothing whatever in those colors, so he took the Thornscape Apprentice and must have been considering a switch.

He didn't have to at all, though - the booster with nothing was merely an anomaly as his next two picks were Plague Spores and another Tower Drake, and then a very late eighth pick Duskwalker. Gary was suffering from having two people removing black cards from boosters, but his deck was still satisfactory - and he had a potentially nice combo with late picks of Tidal Visionary and Spreading Plague. 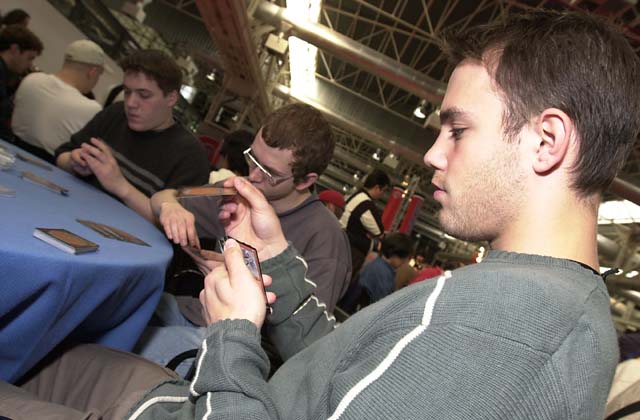 Of course, the fact that three people in a row were picking similar colors should have meant that they were very well cut off, and Gary should have been rewarded in the second booster by plenty of quality cards.

Antoine opened a very nice card - Crosis, the Purger. There are few things so satisfying as opening a Dragon in your colors. Wise once again found a Zanam Djinn in his first booster and this time he took it - passing Exclude.

The Exclude never made it to Antoine, as it was snatched up by the competitor between them who seemed to have a fairly shaky looking Blue-White-Black deck. He still managed to pick up Repulse, Plague Spores, and Vicious Kavu before the picks dried up. It was obvious that there was a shortage of Green-White drafters as Antoine's fifth booster had nothing in his colors but did give him the choice between Armadillo Cloak and Charging Troll!

Gary's luck wasn't as good as Antoine's. Despite the black being totally cut off in the first booster, the Canadian was still reduced to third-picking Phyrexian Reaper. He also picked up a Plague Spores, Phyrexian Slayer, and Alloy Golem, but these boosters were not kind to him.

Antoine made his first Planeshift pick in under a second, and Gary Wise spotted the signs. Ushering me over, he whispered, "I'd bet you a million dollars he took a Flametongue Kavu", and indeed he had. Gary had to take a Caldera Kavu as his booster was much weaker, but he was particularly unhappy about passing the Questing Phelddagrif. Whoever it was that had drafted Green-White would have a nice deck by the end of the draft.

Gary was passed a choice between Magma Burst and Terminate, which improved his spirits a lot - he took the Burst. In fact Planeshift was rather kind to both of the players - Gary got two Cavern Harpies despite the player passing to him also being Black-Blue! He also got a Hunting Drake to combo with his two Tidal Visionaries, and two Slingshot Goblins.

Antoine managed to get three Mire Kavus including one ninth pick which is amazingly late for such a strong card in a weak set, as well as Thunderscape Battlemage.

Both players should have been reasonably happy with their decks and were undoubtedly looking to go at least 3-1, but they had to play each other in the first round. Gary thought that Antoine was probably White-Green, so he couldn't have been further off the mark.

When he played an Island he had all three colors of land in play. Wise started to attack with a Phyrexian Slayer and held the Metathran Zombie back to block. After sucking up two hits from the Slayer, Ruel Repulsed it before playing Thunderscape Battlemage with kicker to empty Gary's hand of all but two cards. 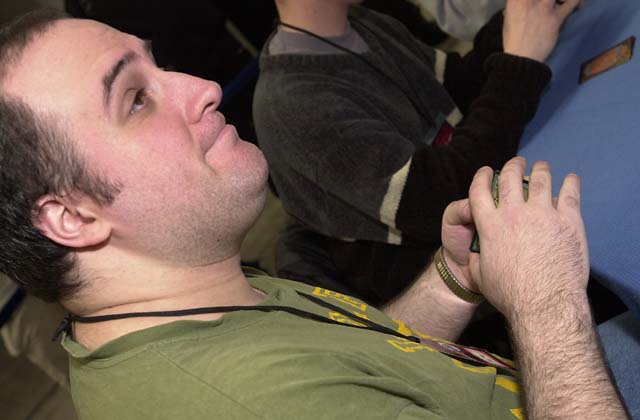 Wise retaliated by Magma Bursting Ruel's two creatures, and playing a Slingshot Goblin. This was perhaps a little aggressive, but Gary had a Yawgmoth's Agenda in hand he could cast on his next turn. However, the board advantage once again swung Ruel's way as he used Plague Spores to destroy the Goblin and the Island. He played a Vicious Kavu, used a second Plague Spores to remove Gary's Mountain and Metathran Zombie, and started to swing with the Kavu.

The Canadian was stuck on three Swamps. "Maybe I shouldn't have used that Magma Burst so aggressively. I didn't know you had so much land destruction." He cast Probe to try and find an answer but didn't, and scooped once Antoine played a Duskwalker that would kill Gary next turn. Gary never got to cast his Agenda in hand.

Wise's opening hand had three Islands as his only mana sources, and with three red cards in hand he had to take a mulligan. Checking the top of his deck revealed that it was a very good mulligan as he would probably have been dead before drawing a red mana source.

After the mulligan, both players got to one land of each type, but Antoine's Vicious Kavu was the first creature. Gary had nothing on his fourth and fifth turn either, and he had to watch while Antoine summoned a Hooded Kavu and then a Mire Kavu. With a hand containing only land, Yawgmoth's Agenda, and uncastable Cavern Harpies, Gary was forced to concede, facing lethal damage on Antoine's seventh turn.