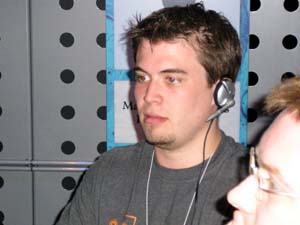 the Pack Draft event both of these players ended up with similar sets to build from. Finkel had PS/PS/AP/8/OD to Kibler's PS/PS/IN/8/SCG

Kibler played first in game 1 and started the action with a turn 3 , followed up with a morph. Finkel was stuck on two Forests and a Plains with a grip of blue cards and things were looking grim. scape Master from Kibler didn't improve that outlook. Jon's next turn saw a Terminal Morraine, allowing him to cast a Zealot to try and throw together some kind of defense but Kibler's morph turned out to be Zombie Cuthroat, and Jon couldn't have been happy to see make an appearance. The pressure was far too much for Finkel and it was time to head to the sideboards.

Brian Kibler: "You've seen my deck and you know every card is better than yours"

Jon chose to go first and was greeted with an opening hand that included Forest, Island, and Plains along with 4 creatures he knew he'd be able to cast this time around. Turn 2 for his splashed Swamp meant that mana wouldn't be an issue this time around. Finkel started the pressure with turn 3 Wind Drake, turn 4 Aven Cloudchaser, turn 5 Dreamwinder. Kibler's opening was slower getting out of the gates with turn 4 , but things sped up with a turn 5 kicked . and Gerrard's Wisdom quickly put the game away for Finkel however, and we were off to game 3. 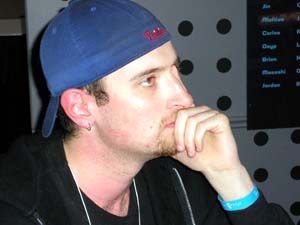 Finkel started out with a nice defensive body this game, dropping turn 2 Canopy Spider. On turn three he got to switch to offense though, playing out Wild Mongrel. On Kibler's side of the table it was all fat, with turn 4 (with a Swamp in play), turn 5 Hill Giant followed by a mystery morph. A from Finkel looked like it might gum the board up but Kibler kicked up a and sent the team. Finkel spent a long time figuring out his blocks and when the dust cleared both Kavu were in Kibler's 'yard as was Finkel's Spider, while the morph turned out to be Zombie Cutthroat. The race was on, with Finkel at 14 and Kibler at 13. Play swung back and forth as the race continued, but as soon as Finkel hit 6 mana a Confiscate on Zombie Cutthroat had Kibler on the ropes. Both players continued dumping out creatures and Kibler was able to stabilize a bit with Hill Giant, , and a that sent a back to Finel's deck. Kibler was back in it, but with only 2 life to Finkel's 14. Kibler's board improved even more next turn, when a bounced his , allowing him to send the to the deck yet again. Kibler was finally back on offense, but he was down to just 1 life to Finkel's 8. Jon put up what defense he could, but in the end his color splashing got the better of him, stranding 3 uncastable cards in his hand as scape Master came down to finish him off.