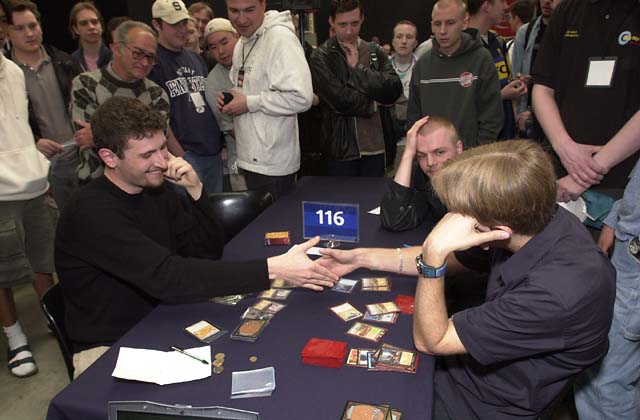 After an extremely long Masters round yesterday Magic's own whiz kid Jon Finkel found no respite in the first round's pairings. His opponent was the might Mattias Jorstedt, one of Europe's finest players and a fixture in any European event. Mattias's draft started with a Breath of Darigaaz but his upstream neighbor followed the Probe road and sent a very juicy signal: a Sabertooth Nishoba. From then on the two of them got along just great.

On the other side of the table Finkel was setting nicely into a U-W pattern although he was a bit short on the "great bombs" department. Mattias tried to diversify and after a late string of non-basic land picks in the first pack it looked like he was switching to the king of Thursday drafts: five color.

The second booster tried to tease him even further into the rainbow side by offering a Tek but Jorstedt decided to settle into U-W but leaving his options open to splash Green for the Nishoba, Red for the Breath or even black for an Hypnotic Cloud. A couple of Silver Drake in the Planeshift pack gave him a bit more beef but he was visibly shaken to have to pick two Artic Merfolk (which he seemed forced to use do to his lack of creatures) very high. Meanwhile Finkel stayed true to his colors eventually picking a Recoil and a Dromar's Charm that led him to splash Black.

After a good luck handshake both players put on their game faces and started the hostilities. Jon opened up with a Tidal Visionary and a Galina's Knight putting Mattias on a moderate clock. A Sky Weaver came in but refused to block the Knight. Finkel increased his army with a Kangee's Disciple.

A Razorfoot Griffin from Jorstedt seemed the perfect blocker for the American horde but, perhaps fearing a combat trick, Mattias decided to trade damage instead of holding back the first striker. Jon then played a small, yet influential, Stormscape Apprentice that promised a lot of headaches for the Swede. Mattias immediately went into his think tank but returned without an answer for the Apprentice deciding only to swing once again and play two extra fliers.

The Visionary painted the Aurora Griffin Red to show the full glory of an incoming Hunting Drake. The Griffin jumped to the top of Mattias's library and was replaced by a Sliver Drake, also known as the new king of the sky. The lighting pace of the first few turns meshed into a more human pace as both players tried to find a way around the wall of fliers on the other side of the table.

With the Drake held back by the overworked Apprentice, Jorstedt could do little else than replay the Griffin. Jon joined the recruiting mania with a Crimson Acolyte. They both took their turns carefully knowing that a misplay could spell a very large problem later on.

Jon's first Swamp forced Mattias to rethink his options. Not only did he have to account for a larger card pool but the infamous Blue tapper could now also use his second ability. The Swedish sent in the Drake, Weaver and Razorfoot Griffin in producing a massive battle in the sky. The Drake and Weaver took down the tricky Visionary and the Hunting Drake. Mattias then played another flying monster: Angel of Mercy.

Despite the amazing help of the tapper, Finkel seemed pressed to keep up with the flying armada, preferring to swing back with his second Kangee's Disciple. Jon's Crimson Acolyte suddenly became a central part of the board when he gained a Sisay's Ingenuity thus enabling him to use his protection ability. A Hobble from the American was stopped by an Absorb and the Razorfoot Griffin continued his slow march to victory while his comrade in arms, the Angel, was nullified by the Apprentice.

But Finkel again changed the face of the table with a Benalish Trapper that promised to lock a second attacker. Mattias put one of his Artic Merfolk to good use bouncing the Angel of Mercy to gain three extra life points. Despite all the available tricks, the Galina's Knight traded with the Artic Merfolk, as Jon's mere four life points forced him to be extremely careful. 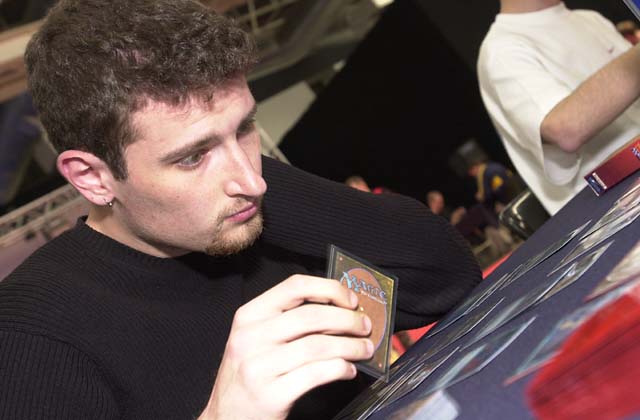 With the two tappers holding back the flying duo, Finkel needed to find an answer and he needed it fast. He used a Stormscape Battlemage to gain three life and blow up the Aurora Griffin. That seemed to swing the game around and Jon now had seven creatures to Jorstedt's three and his Benalish Herald forced the eternally calm Mattias to punch his deck in disgust, perhaps demanding his Breath of Darigaaz that would have wiped out everything but his two massive, and presently locked, birds.

Alas, the deck did not give in to the violence and Mattias was forced to concede.

The sideboarding was brisk and minimal punctuated by a few comments about the draft. This time Mattias opened with a Spirit Weaver that was promptly blocked by a Stormscape Familiar. The Dutch had a Familiar of his own and used it to gate an Artic Merfolk. Finkel stopped any beatdown ideas with a big, and powerful, blocker: Benalish Heralds.

Unfazed, Jorstedt sent the Merfolk in, daring Jon to block, which led to a staring contest with Finkel calling the bluff. It was, in fact, a bluffing move with Mattias merely replaying the Familiar and adding a Benalish Lancer to the mix. The Lancer was big enough to go around the Herald but Finkel bounced back by Recoiling the Lancer (forcing Mattias to discard a Hobble) and playing a Stormscape Apprentice. The Lancer came back but Finkel could now tap him and still draw a card via the Herald. Mattias found another big bruiser in the shape of his Angel of Mercy that promptly got Hobbled.

A Tidal Visionary from the American side look like the final stone on a very stable defensive wall, but the Swedish had different ideas. He also had a blue Apprentice and a Hypnotic Cloud (with the appropriate devastating kicker) to mess up Finkel's math. With the game now in the midst of a "tap your tapper" mode, a Meddling Mage (locking Stormscape Battlemage) joined Mattias's side.

Despite all this movement, the Herald still kept Finkel's hand flowing and spelled trouble for Mattias. He played a big Nishoba but the table was still ruled by the mirror Apprentices and the ever-moving Herald. The Visionary-Obsidian Acolyte duo looked enough to stop any single attacker, but Jorstedt's horde was a giant mass of incoming pain waiting for an opening to unleash its power. A Restrain from Finkel stopped the first swing of the Nishoba and a second tapper, a Benalish Trapper, again seemed to close any gap in his defenses.

With Jorstedt's combat phases lasting long minutes, Finkel asked to get some space from the huge crowd surrounding the small table since it was dragging the pace of the game. After another long period of meditation, the Nishoba was finally blocked by the Acolyte, Herald and a Sparring Golem in what looked to be the decisive moment of the second game. The Nishoba killed the Herald and a Silver Drake unlocked the Angel of Mercy just has the ten minute warning sounded.

Finkel's back was now against the proverbial wall. Faced with three huge creatures that were only merely slowed down by his tappers, with no answer in sight and the time quickly dwindling away, Finkel conceded hoping to win a fast third game. 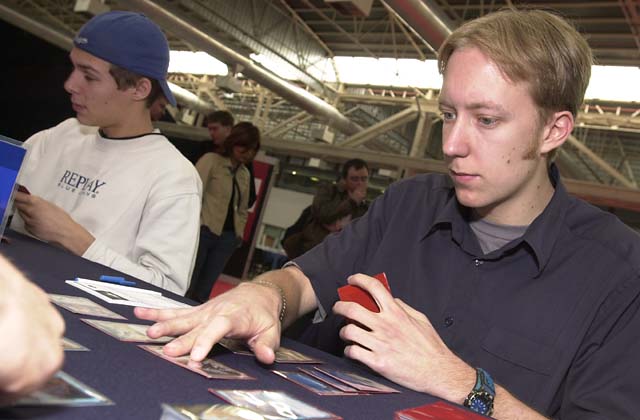 After two very long games, both players tried to do the impossible: finish a game in less than ten minutes. Finkel used a Strength of Unity to create a very, very large Familiar. A Dismantling Blow quickly ended that plan but they both kept playing creatures at an amazing pace trading blows whenever they had the chance. Mattias again locked out Stormscape Battlemage with a Meddling Mage while Jon played a Benalish Trapper and a Prison Barricade. The tension grew as Finkel seemed to question Mattias's game pace with his piercing silent gaze.

With three tappers on the table and only two minutes left the round seemed poised to end in a draw with the vast array of creatures on the table. Despite being behind on the damage race, Finkel had two tappers, a Recoil and a Dromar's Charm in hand when time was called with the score was even at seven life points.

Dromar's Charm took out the Meddling Mage but Mattias wiped the American's army with a flaming kicked Breath of Darigaaz. Now Finkel was left with one single blocker and a Recoil to hold back two flyers. He still did his magic. With no cards in hand or blockers on the table he topdecked a Pollen Remedy to prevent Jorstedt's fatal swing.