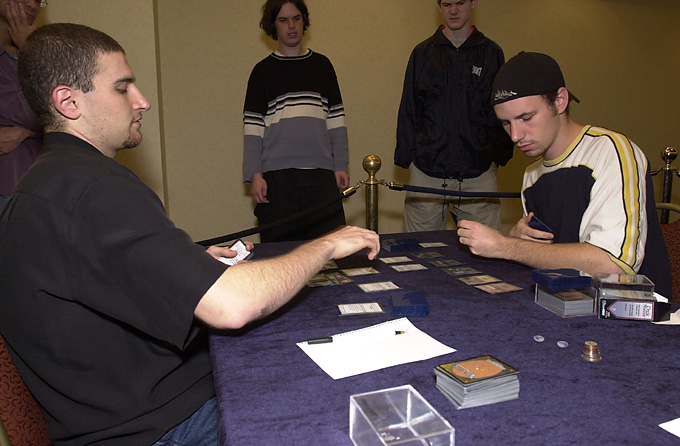 Ryan Fuller and Jon Finkel have some history. At last year's World Championships, Ryan and Jon played each other in the team competition and Jon administered some of the most savage beatings ever seen in a Constructed event, talking trash all the while. Jon and Ryan seem to enjoy the banter, as both players were quite talkative during this match. Ryan seemed to be a little unhappy with his deck choice though, as he won the flip and chose to draw. This seemed to be just fine with Finkel and we shuffled up for game one.

The decks in this format tend to be a little slower than normal, with Finkel's first creature being a turn four Deepwood Tantiv. Fuller came out pretty quickly, considering the format, with a turn two Groundskeeper, and turn three Hyperion Blacksmith. Fuller's offense stopped though, when the Tantiv hit the board, and Finkel continued to drop monsters, playing a Hunting Moa and pumping up his Tantiv, while still playing defense. Fuller attempted the first 'combo' of the match, with a Thran Forge and Aladdin. Finkel had the answer though, as he dropped a bomb: Subterranean Spirit. Fuller apparently wasn't fully aware that the Spirit was protection from red, and tried to steal it with the combo. Finkel knew what was up though, and chuckled as Fuller tried it. "At least you thought you were in the game for awhile, right?" Finkel said as he was grinning ear to ear. Fuller chuckled as well when the Spirit went nuts and killed two Breeding Pit tokens, Groundskeeper, and Aladdin, leaving only Finkel's huge Tantiv (4/6) and the Spirit. Fuller tried his best, and played a Rukh Egg. Still laughing, Finkel played an Illicit Auction and 'stole' the Rukh Egg for four life, and Fuller had had enough at this point and hoped for better in game two as he packed it up. 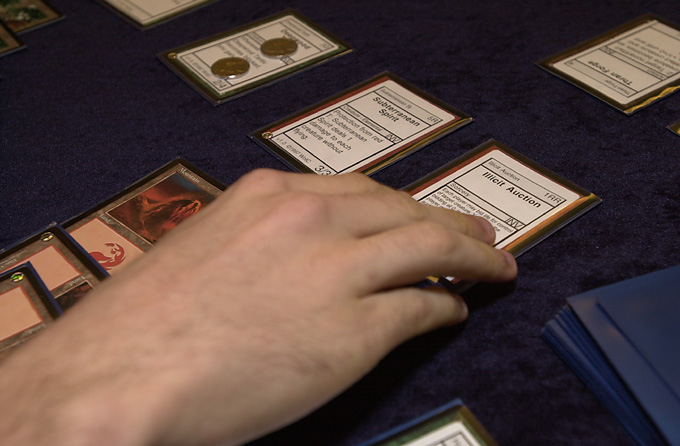 Game two started slowly as well, with the first non-land play in the match being Finkel's turn four Tracker. I looked over and saw Finkel biting his knuckle and grinning like a madman, so I knew something else was up. Lacking any other play on turn four, Fuller dropped The Abyss which dealt with the Tracker, and when Finkel played his own Enchant World (Living Plane) the next turn, I saw the plan. Were the Tracker still around, Finkel could just tap Tracker to kill a land every turn. Still, the Living Plane was good, as Fuller had only four land and no creatures (other than his own land.) The pressure was on Fuller now, as Finkel kept dropping land after land and attacking with them. Fuller found a Spidersilk Armor and a Thran Forge, but the mana he had to tap to cast them cost him, as Finkel swung for 5 and then 6 with his creature-lands. After a Dark Banishing took care of Finkel's Arctic Wolves, Jon sealed the deal and dropped a Keldon Firebombers, forcing everyone down to three lands. Fuller realized the pressure was too much, declined to participate in the beating any longer, and scooped them up with a laugh.