Round 1 Feature Match: Just for Men vs. Juggernaut 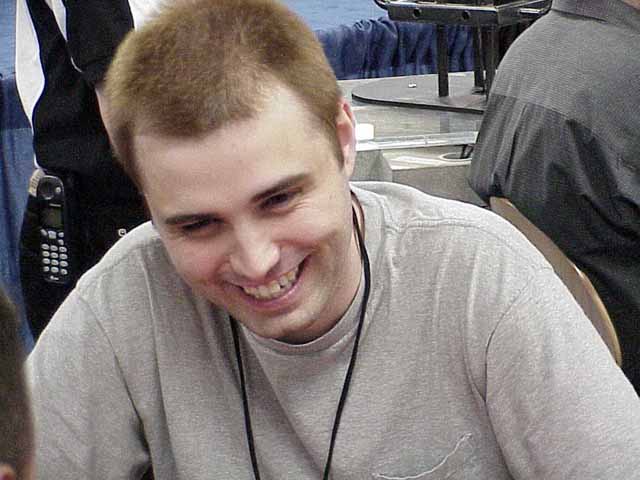 Both of these teams have well known players on them, with Just for Men including Chris Pikula, the current Magic Invitational Champion. His teammates are less well known; Alex Balandin and Ben Murray. Chris says that they are talented players who just don't get the time to test and play so much. Team Juggernaut consists of three top German players; Kai Budde, Dirk Barberowski, and Andre Konstanczer. All of these players have had success at the highest level with Dirk and Kai previous pro-tour winners, and Andre has played in previous Pro Tour top eights.

The Germans were less than happy with their sealed decks, lacking really powerful cards. Dirk's deck in particular is one they were less than satisfied with, and Kai has the strongest of the three decks. Just for Men thought that their decks were average, Chris Pikula has a few breakers with a Latulla, Keldon Overseer, and a Troubled Healer. He also has a very strong rebel chain. Ben Murray's deck is Red/Blue with a good selection of creatures, and Chris Balandin is playing black and green.

Andre gets off to a pretty good start in game one, with a Rib Cage Spider, a Saber Ants, and then a Saproling Burst, one of the better cards the Germans have. When he casts a four point Thrive, giving four creatures +1/+1, Chris Pikula jokes "My opponent is playing Thrive, and I'm still going to lose!" His prediction is still in doubt, though, he has a few tricks of his own. When Andre attacks with all of his creatures, Chris uses a 6/6 Scoria cat to block one token, and double-blocks another token with his Voice of Truth and Thermal Glider. This block looks good for Andre as the token blocked by the Scoria Cat receives a boost from a timely Seal of Strength, but Chris has planned for this and uses a Ramosian Rally to turn the combat in his favor.

Two of the tokens die, and Chris loses only a Voice of Truth and a Kris Mage - this is fine for him as the Saproling Burst tokens remaining will get smaller every turn. Chris continues to improve his board position with a Cho-Arrim Bruiser and a Noble Purpose, the Scoria Cat getting Desert Twistered by Andre. The Noble Purpose allows Chris to attack, as the life he gains is sufficient to negate Andre's damage. As Andre doesn't draw enough large creatures - the Bruiser can tap two of them when it attacks, he is forced to concede after Chris has reduced him to two life, and gained life up to twenty-eight himself.

This game is the first to finish, but game one of Ben Murray against Dirk Barberowski isn't far behind. Both players control the board with a lot of creature removal, a typical feature of red against red matchups. Ben has the better board position, with a Stinging Barrier, and a Zarapa the Minotaur. He sneaked through a few points of creature damage earlier in the game, and when he draws a Lightning Hounds, Dirk is in real trouble. He has a Hired Giant, but its's four toughness is still not enough - Ben can use hus Stinging Barrier during combat to kill whichever creature Dirk blocks with. Not drawing another creature, or any further creature removal, Dirk is soon forced to concede.

Game one of Kai Budde - Alex Balandin is an interesting one. In the early game, both players build up to a large creature stalemate, but then Alex draws a Haunting Crossroads, which combines well with the Highway Robber he has in play. Kai is under pressure as he is forced to kill the Highway Robber each time it attacks, allowing Alex to cast it again using the Crossroads. Kai breathes a sigh of relief when he draws a Seal of Cleansing, stopping the recursion. He plays a Cateran Overlord, which is much larger than anything Alex has in play, and he is soon forced to start chump blocking. The game is over quickly as Kai adds a Cho-Arrim Bruiserb to the board.

Andre needs to win his second game to stay in the match, but Chris quickly gains the ascendancy. It seems like a game he's certain to win, as he has a Noble Purpse out again, with a Troubled Healer and a couple of flyers - a Thermal Glider and a Defiant Falcon. The Squallmonger that Andre has in play seems like a liability, he is only on ten life, and taking three flying damage every turn. Then he draws a bomb - Dominate. Chris' face falls as Andre taps six mana and Dominated his Troubled Healer, "I just went from not being able to lose this game to not being able to win". This proves true, as the Squallmonger can now deal easily with his two flyers, without life being a problem. When he plays a Coastal Piracy, Chris sweeps up his cards disgustedly, and they head on to game three.

The Germans fall further behind, though as in game two of Barberowski-Murray, Dirk draws no way of dealing with large creatures, even being forced to take damage from a Veteran Brawlers as he tries to find an answer. Ben has a Laccolith Warrior, a Lightning Hounds, and a Veteran Brawlers. Despite dealing nine damage with a Blood Oath, Dirk draws nothing at all that can deal with those creatures, and loses around turn seven.

Now both of the German players need to win their matches for their team to win, and Kai forces a deciding game between Chris and Andre, when he takes the second game. Once again it is Kai's Cateran Overlord that decides the issue, black/green rarely having a way to deal with large black creatures. Despite a few tricks and small creatures from Alex, he once again is forced to concede, after throwing creatures in the way for a few turns.

In game three, Chris shows off part of the rebel chain that he didn't feel the need to reveal in games one or two. He plays out first a Sergeant, then a Defiant Falcon, a Thermal Glider, a Pious Warrior, a Ramosian Captain, and finally a Cho-Manno, Revolutionary.

Andre is in big trouble, as he has a hand full of five blue cards, and hasn't drawn one of his eight islands. He isn't taking too much damage though, with a Rib Cage Spider more than capable of holding off the Thermal Glider and Defiant Falcon. Things change as Chris plays his teams most powerful card, Latulla, Keldon Overseer. With plenty of cards in hand, this means that Andre has only three turns to find a solution, before Chris unleashes sufficient Fireballs from the Overseer to kill him. Andre still can't find an Island, and is obviously disappointed to lose. Although he needed an Island to put up any real fight, his hand does not contain a Dominate, which is basically his only solution to Latulla, so Chris almost certainly would have won anyway.