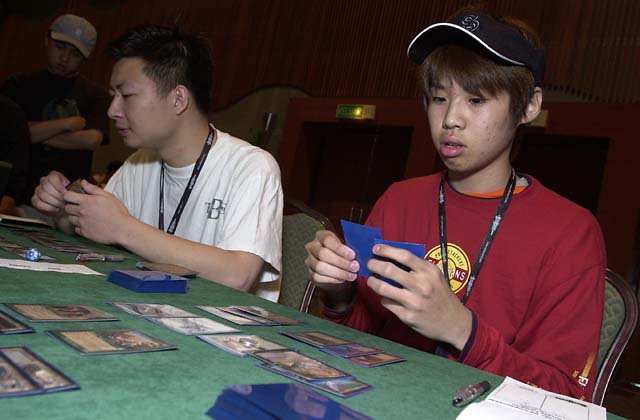 Katsuhiro Mori is neck and neck with Lawrence Creech and Ken Ho in the Rookie of the Year Race. A strong showing at Worlds could put him over the top, and he hopes to get a running start here at APACs. First in his path of destruction is 2000 Japanese National Champion Tsuyoshi Douyama. It will not be an easy match.

Mori opened with a Turn 3 Benalish Lancer. Sacrificing the ability to play it with kicker in exchange for a boost of speed proved worth it, as Douyama did not have a play until turn four, at which time he summoned a Voracious Cobra. Surprisingly, he chose not to block the Lancer anyway.

On his following turn, Douyama summoned a Zombie Boa, only to have it Repulsed by Mori, who summoned Kavu Climber on his turn. Climber blocked Voracious Cobra, and Mori used Orim's Cure to prevent its damage, negating Cobra's basilisk ability. He then used Vindicate to take out Ancient Kavu, leaving Douyama with no creatures on the table. An Amphibious Kavu with Armadillo Cloak on it, and a Rushing River to bounce the poor Zombie Boa yet again sealed the deal, with Mori's tempo-oriented deck taking the first game.

Mori chose to mulligan away his hand in the second game. He had two lands - but no green or white mana, which were the main colors of his deck. He chose to keep the six-card hand without actually looking at it - apparently believing in his luck. The new hand offered only one mana, but his following land draws were excellent, and Mori did not skip a land drop till turn six! He summoned a Benalish Emissary without kicker to hold off Douyama's army of green creatures, then began to develop an air force by casting Voice of All and Aurora Griffin. 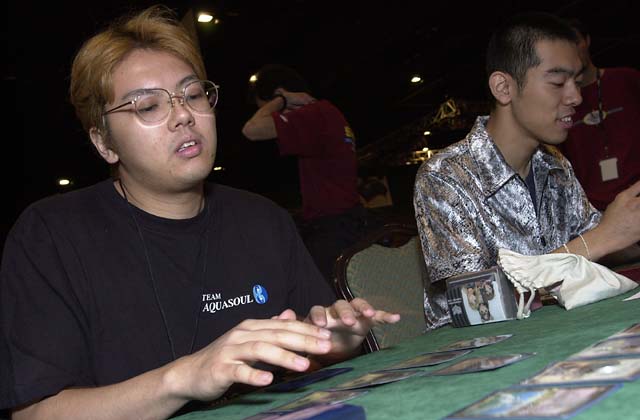 Douyama had larger creatures, including a Kavu Howler, but Mori had more tricks in hand. Douyama solved that problem by casting Bog Down with kicker and forcing his opponent to discard his entire hand. Mori was counting on his Orim's Cure and Confound to carry the day, and was now suddenly behind in the race and unable to catch up. Douyama's superior creatures did their job, unharassed by his opponent's many tricks.

Douyama went second in the final game, but cast the first creature - a turn one Ana Disciple. Mori more than matched him by playing a Samite Pilgrim. Douyama made a very dangerous play by sacrificing Ana Disciple to Mind Extraction. Unfortunately for him, his opponent had no green cards in hand. He did however have plenty of white ones.

Mori went on to summon those same white creatures, then drew and cast Treva and enchanted it with Armadillo Cloak. Douyama tried desperately to draw into an answer, by casting an Urborg Uprising on the Ana Disciple. Mori was more than confident with Confound in hand - there would be little Douyama could possibly do at that point. Confound never got to see play though - Douyama failed to draw any viable answers, the game and match going to Mori.