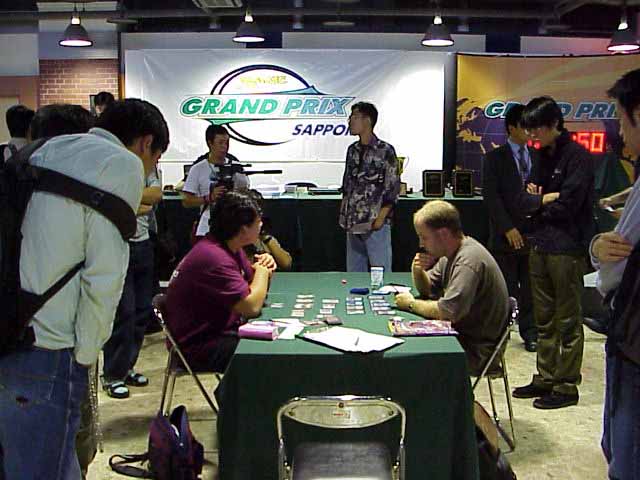 The first feature match for Grand Prix-Sapporo placed Koji Sato of Japan against Chris Guerrette, who is an American soldier stationed at the Misawa airbase.

The opening turns declared Koji as playing white and red and Chris, white and blue. Chris opened with a Spiketail Hatchling and Koji played a Seal of cleansing. Murmurs of amazement where heard when Chris played a Foil Rishadan Port, and then proceeded to lock down one of Koji's Plains. Koji drops a Nightwind Glider which Chris responds to on his next turn by dropping a Stinging Barrier. The Glider gets one attack phase before it is shot down by the Barrier. 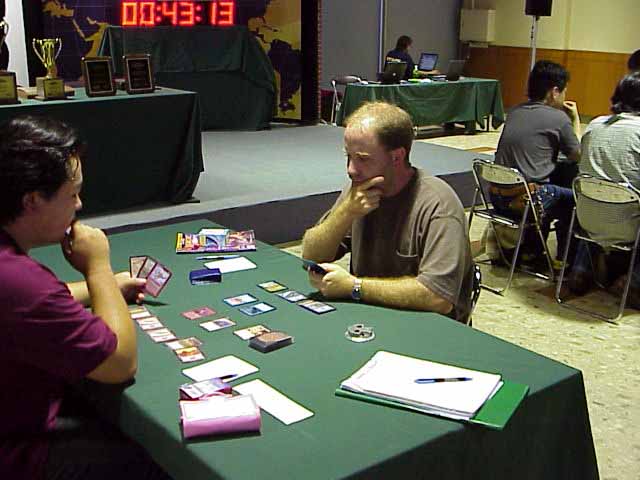 On the next few turns Chris plays various creatures, including a Cloudskate, Defiant Falcon and an Aerial Caravan. Koji answers with a Zerapa Minotaur and Battle Squadron. The Battle Squadron is removed thanks to a Topple by Chris. Koji can't stand up the barrage of flying creatures and combined with a damage a turn from the Stinging Barrier, dies shortly thereafter.

Koji plays first opening with a mountain, plains, Spur Grappler and a Nightwind Glider. Chris starts off with his Foil Port, a plains, an island and a Cloudskate. The Grappler trades for the Cloudskate but the Glider does some damage. Chris then draws an answer for the Glider in the form of a Charmed Griffin, which enables Koji to drop his Bargaining Table for free. Thanks to a little card advantage from the Bargaining Table, Koji starts dropping a lot of creatures including a Voice of Truth and a Lawbringer. The Glider and the Griffin take each other down but the Voice of Truth starts hurting Chris. 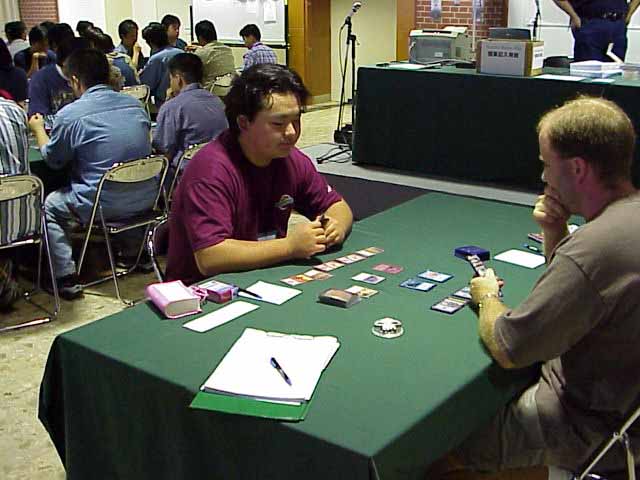 Various tricks with Cho-Manno's Blessing by both players leaves Koji in a slightly better position as he has more flyers. Chris's Ramosian Commander comes to the party but is too late to save the day as time is called and Koji flies over for the kill on the last turn of the five extra turns.

Match ends in a draw with one game each