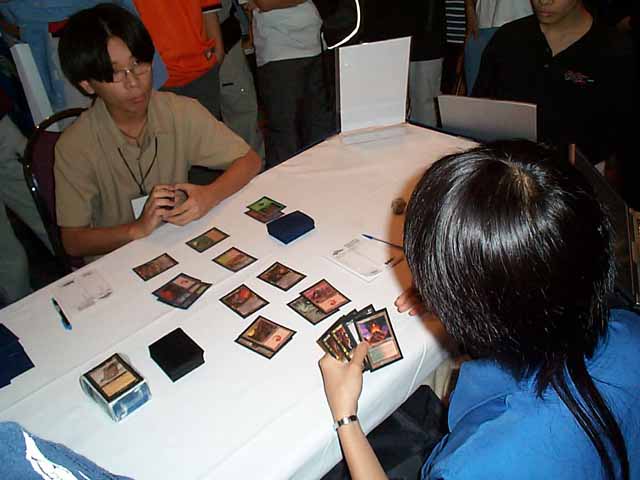 Felix Leong is one of Singapore's past greats, playing a Sligh deck to a 6-0 finish at the 1998 Singapore National Championships. Since then, Leong has faded away from the spotlight, instead playing only in the occasional major event. Our last sighting caught him in the 2001 Singapore National Championships, and before that, at last year's Grand Prix-Singapore, where he also earned a Feature Match. His opponent, Chris Tan is still a relative unknown in the local scene, and has only recently begun to be a frequent participant at large events.

Winning the die roll, Leong opted to play first. Armed with a red-black aggressive-discard deck, he came out guns blazing, with a second turn Shivan Zombie. A first turn Shivan Oasis from Tan indicated that he was using one of the much-discussed red-green archetypes. However, it was still not clear to his opponent whether it was the red-green beatdown designs of Tokyo, or the red-green-blue design which brought a 9th place finish to David Price and GP-Denver, and has since been used to much success on the international scene. A second turn Kavu Titan showed up to match the Zombie, but Leong continued relentlessly, building up with a Plague Spitter that would almost surely be trouble for his opponent. When a mountain accompanied the Shivan Oasis, it became obvious that Tan was playing the red-green "Rocketshoes" deck that was so popular back at Pro Tour-Tokyo.

Blazing Specters soon came online to attack Tan's hand. Tan tried to mount a counter-offense with a newly played Raging Kavu. Doing the math, Leong opted to race the two opposing Kavus, mostly due to his second Plague Spitter that would be sure to take out the offending Raging Kavu, save for a Scorching Lava with kicker. However, one problem with the Plague Spitter is that, should Tan be able to kill it during Leong's turn, Leong's entire force would be decimated. In comparison, Tan would lose his Kavu Titan and Raging Kavu- the latter of which would die anyway.

Instead, Tan Urza's Raged the Plague Spitter on his own turn, which not only left Leong's army intact, but killed off his own Raging Kavu. Despite Tan' best efforts to contain the assault, an army of Zombies (of the Shivan and Pyre variety) joined the Shivan Zombie already in play to apply even more pressure upon the hapless Tan. The ensuing combat phase was bloody. A Blurred Mongoose and a Kavu Titan traded with the Shivan Zombie duo, leaving the Pyre Zombie behind.

Fortunately for Tan, another Titan, this time fully kicked, entered play to valiantly hold off the Pyre Zombie.

Unfortunately for Tan, by this point he was at a measly 4 life. A 5/5 trampling, Kavu Titan just wasn't enough to race. 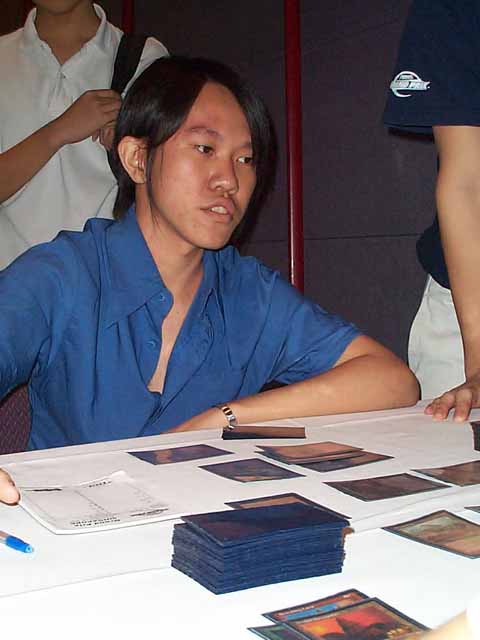 Delving into their sideboards, both players began preparations for the second game of the match. Fearing Dodecapods, Leong brought out all four Blazing Specters, along with a pair of Addles and a pair of Thunderscape Battlemages, opting to replace them with two Flametongue Kavus, two Voids, two Tsabo's Decree and a pair of the little-seen Annihilates. Tan brought out his four Raging Kavus and his one maindeck copy of Obliterate for a pair of Thornscape Battlemages and three Flametongue Kavus.

For obvious reasons, Tan decided to open in the second game. He started with a second turn Barbarian, which traded with a Shivan Zombie, while a Blurred Mongoose came into the limelight to replace its fallen comrade. A second Shivan Zombie came to the forefront, attempting to trade with the Mongoose, but Tan would have none of that and summoned a Flametongue Kavu to take out the Zombie. Leong's own Flametongue Kavu took out Tan's Flametongue Kavu, and was unwilling to take down the Mongoose in combat, for reasons revolving around the Void in his hand, which took out both the Mongoose and a newly played Yavimaya Barbarian.

With the board clear, Skizzik joined in to try and fry Tan, but instead it was the Skizzik who got fried at the end of Urza's Rage. With no further plays from Tan, except for land, it soon became painfully obvious that Tan was in trouble. Meanwhile, the Flametongue Kavu was relentless, eating chunks out of Tan's life total before it was downed by Scorching Lava.

With an entire turn passed by both players with no plays other than land, it became obvious that both players had been exhausted of their offensive cards and was now either holding just land, or an arsenal of defensive measures. A Skizzik appeared on Tan' side, which met up with an Annihilate from Leong, drawing comments from the surrounding crowd, and proving that Leong indeed held the aforementioned defensive arsenal. An Addle similarly revealed that Tan was in the not-so-fortunate position of holding land in hand. Leong quickly took advantage of this with a Pyre Zombie off the top that was sooner sent into the red zone, along with a second for companionship. Seeing no way out of this situation, Tan conceded the match to Leong.