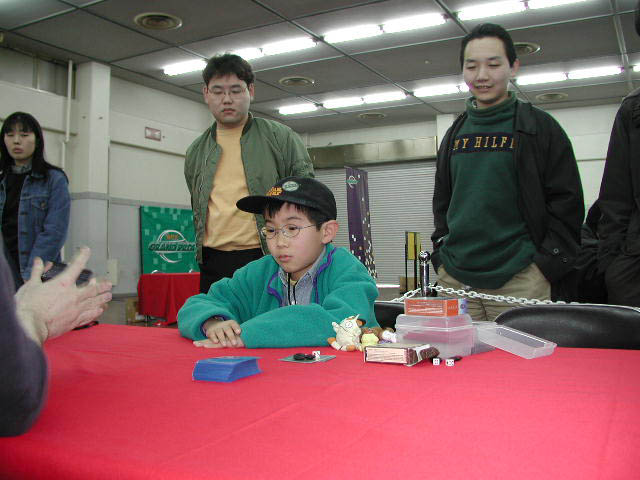 After paper0scissors-rock to get things started, Masaei choose to play first and kept a hand with two mountains. Masaei is an up and coming player who is eleven years old. He is playing black/red/blue, the most popular combination amongst players today and he was facing off against the green/white/blue deck of Keitaro.

After two turns of laying lands from Masaei this unfortunately was where his land drops stopped. Starring down the barrel of a 2nd turn Obsidian Acolyte, 3rd turn Pincer Spider, 5th turn Serpentine Kavu and 6th turn Zanam Djinn, it was time to concede.

Game two preparation from Masaei included bringing out the lucky charms, waving a small gold coin on a chain above his deck for good luck and then above his opponents deck, in hope of avoiding mana screw this game. After the game I asked him about this interesting ritual and was told it was his own creation he used to bring him luck. 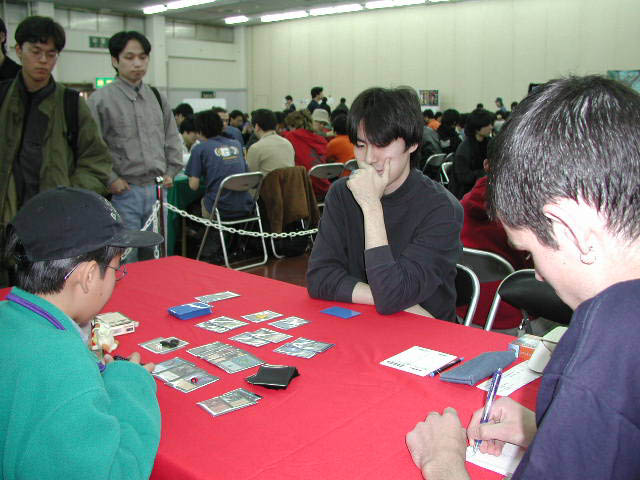 Masaei sideboarded in an exclude, which I am surprised he is not maindecking as well as an Urborg Skeleton obviously to stop some of the fat green creatures that pummeled him in the first game. Keitaro did not sideboard for the 2nd game.

Masaei's opening hand looked a lot better than game one with mana of all three colors. He plays first and drops a turn one Tidal Visionary. Keitaro has a turn three Galina's Knight and on turn three Masaei chooses not to exclude a Llanowar Knight but does Exclude the Tidal Visionary that followed. The early game was in Masaei's favor with a Treva's Attendant and kicked Urborg Skeleton joining his forces while a Scorching Lava took out the Llanowar Knight. At this point Keitaro goes on the defensive until he plays a 6th turn Pincer Spider with kicker. Masaei drew an Exotic Curse that he could have played on the spider to continue to apply pressure, but he held onto this card for 2 turns opting to sit on the fence. Keitaro drew and played an Obsidian Acolyte which looked like it was really going to mess with Masaei's strategy and rendering the Exotic Curse useless. Luckily Masaei top decked a Scorching Lava to remove the acolyte but his Exotic Curse met with an Absorb. If Masaei had played the curse when Keitaro was tapped out to play the spider things may have been a little different.

On the next turn Keitaro played Armadillo Cloak on the spider and this is where the game swung Keitaro's way, especially the turn following when the Armadillo Cloak was joined by a Traveler's Cloak making this well-wrapped- up spider king of the table. In a matter of 4 turns the spider had gone all the way, as blockers no longer mattered. 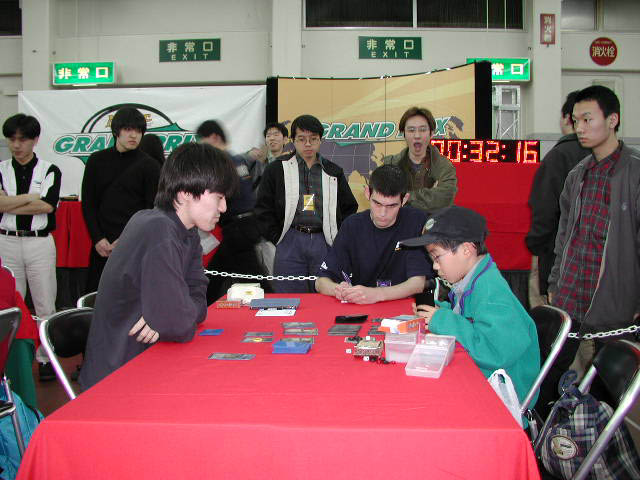 Ironically Masaei's final draw was another mountain to go with the other two land he was holding in hand. Luck was not with Masaei for this round despite his best efforts.