When the feature matches for Round 1 were announced, a rumble from the crowd went up. Two years ago, Higashino beat Kuroda in the final match to become the national champion. Since then, the two players have continued their rivalry. Both hail from Osaka, Japan's second city. Kuroda is known for his deckbuilding skills, while Higashino is a highly skilled player, with two GP wins (Tohoku and Hiroshima) under his built. Kuroda recently led his team, Poor Shark, to a second-place finish at GP Yokohama.

There was a sense of déjà vu as the two players sat down and began shuffling their decks. Kuroda looked into Higashino's eyes and joked "I've been waiting two years to get my revenge. Are you ready?" Higashino replied with a guffaw and said "Are you ready?"

Higashino is playing a UWG deck with a clearly defined mana curve that starts out by playing various Apprentices, Drakes, and other small creatures while building up to heavy hitters such as Treva and Nemata, with a touch of black for Dromar's Charm. On the other hand, Kuroda is playing Dromar colors (WUB) with heavy time advantage cards, including multiple Bog Downs, Repulses, and Recoils. 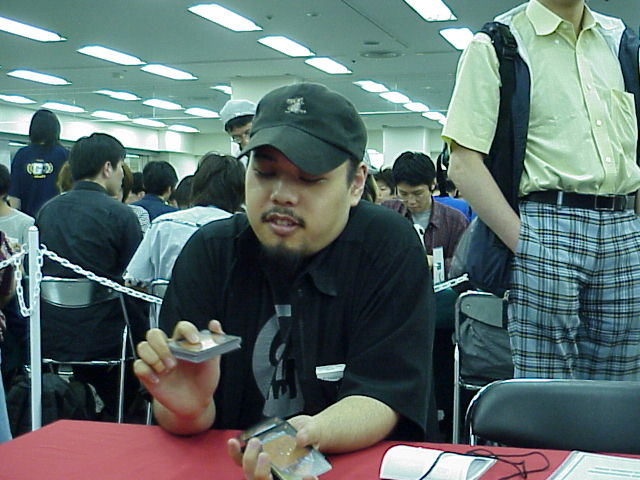 Masayuki HigashinoHigashino chose to play first, but was forced to mulligan. His third turn Tower Drake was met with a 4th turn Phyrexian Slayer by Kuroda. The two traded life with the flying creatures for a few turns. In response to Higashino's Llanowar Knight, Kuroda produced Teferi's Moat set to green. This evoked a sigh of frustration from Higashino, who only stared at the Nemata in his hand. Higashino continued to swing with the Drake while Kuroda made a Vodalian Zombie.

A Fact or Fiction by Kuroda produced a Cavern Harpy, Shifting Sky, two Swamps and an Island. Higashino put the Harpy into a pile by itself, which was quickly scooped up by Kuroda, who played the Harpy by bouncing the Zombie. Kuroda then Recoiled Higashino's Drake and replayed the Zombie. When Kuroda played a Volcano Imp the following turn, Higashino scooped, unable to find an answer for his opponent's flying armada. 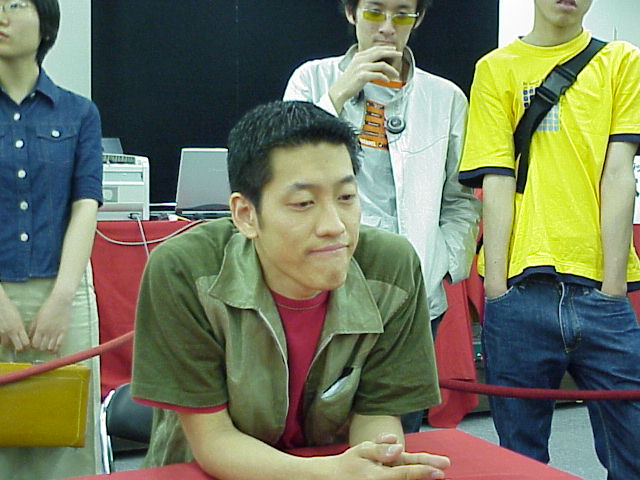 Masashiro KurodaWhile Kuroda continued shuffling, Higashino got up from the table to get more land. He returned with three Islands, which he swapped for a Swamp, Dromar's Charm, and Honorable Scout.

Higashino quickly took the lead by producing a swarm of creatures--by turn 3 he had four creatures in play: Stormscape Apprentice, Dream Thrush, Llanowar Knight, and Sunscape Apprentice, while Kuroda only had land. Kuroda was only able to put up token resistance, playing a Phyrexian Bloodstock, before being overwhelmed by Higashino's weenie rush. The entire game lasted all of five minutes. Kuroda is unable to find an answer for Higashino's dragon legendKuroda thought long and hard about his opening hand, finally choosing to mulligan. Higashino was also forced to take a mulligan, as the lands in his hand didn't match his cards. Kuroda tried to take advantage of his opponent's mulligan by playing Bog Down two turns in a row (netting a Prison Barricade, Forest, Stormscape Apprentice, and Gerrard's Command), and playing Faerie Squadron, Cavern Harpy, and the bounced Squadron with kicker. He appeared to have the game in hand when he kicked a Nightscape Battlemage, bouncing two of Higashino's creatures, but Higashino topdecked an Obsidian Acolyte, giving Kuroda pause. Higashino's luck continued as he topdecked Treva, and put the dragon legend into play with a flourish.

Kuroda stopped the first attack by Treva with the Harpy, bouncing the Battlemage when he replayed to, trying to get into a position to replay the Battlemage with kicker to stop Treva. Treva ate the Faerie Squadron on its second run, while Higashino was careful to leave white mana available for the Obsidian Acolyte's ability. With no way to deal with Treva, Kuroda scooped, telling Higashino "Someday--I'll get my revenge someday."