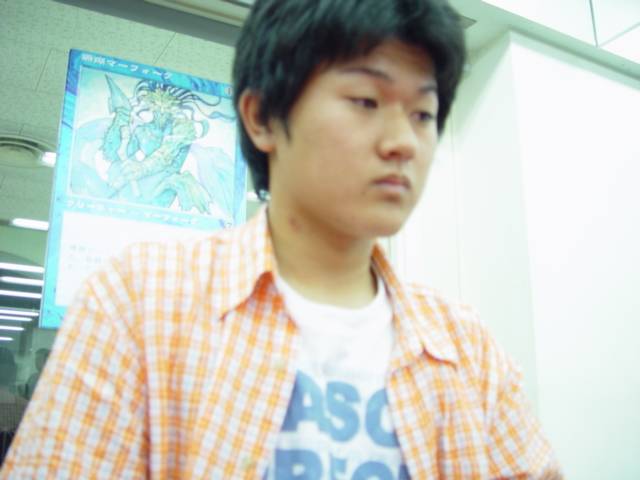 Michihisa OnodaA member of the 2000 national team, the young Onoda has inherited the title of "#1 High School Player" from Itaru Ishida. He is a regular on the Pro Tour and is often seen at the top tables at Japanese Grand Prix. He has chosen to play a BW Braids deck, while his opponent Okamoto is playing UWR Trenches Contol. With both players sporting control decks, this promises to be an intense matchup.

Onoda chose to draw after winning the coin toss, and began putting pressure on Okamoto early with a Ravenous Rats quickly followed by a Nantuko Shade. Using Repulse to keep the beats to a minimum, Okamoto continued to build up his mana base, using Repulse and Prophetic Bolt to blunt Onoda's offensive. Onoda tried to recover tempo with an Ichorid, but Okamoto had an answer for that as well in the form of Goblin Trenches. Trying to drain his opponent's hand of counters, Onodoa continued to play threats--another Shade, more Rats--but Okamoto seemed to have an answer for everything. However, things swung back in Onoda's favor when, after a Gerrard's Verdict, he was able to force through a Vindicate on Okamoto's Trenches. Using Fact or Fiction, Okamoto burned through his deck trying to find another Trenches while using Absorb to buy time while continuing to take beats from Ichorid. Onoda went for broke, playing Shambling Swarm followed by Braids, but Okamoto was able to clear the board with a Prophetic Bolt on the Swarm. Eventually drawing into a Trenches, Okamoto took control of the board, converting his ample supply of land into Goblins. 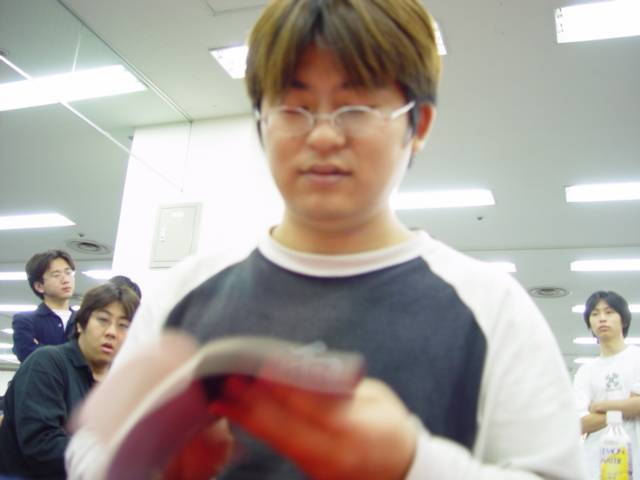 Jin OkamotoOnoda busted out of the gate in the second game, knocking a Trenches out of Okamoto's hand with a first-turn Duress, followed by a second-turn Shade. Unable to find any bounce, Okamoto's life total rapidly dropped to 5 as the Shade swung without opposition. Hoping to stabilize, Okomoto played Trenches, but Onoda was relentless in his assault, responding with another Shade. Okamoto put up a valient struggle, but eventually ran out of lands to feed to the Trenches and succumbed to double-Shade beatdown.

Shaken by the thrashing he had just received, Okamoto brought back the Wraths he had previously sideboarded out. He had less than an optimum draw, however, with his only lands being 2 Skyshroud Expanses, meaning he was unable to stop Onoda from making a Shade and a Phyrexian Rager. With Okamoto stuck with a Coastal Tower and the Expanses, Onoda went to work on his hand with Ravenous Rats (netting a Rakavolver) and a Verdict (stripping a Memory Lapse and Urza's Rage). Okamoto tried to slow the beats by Absorbing another Rager, but was unable to draw into any land. Onoda sealed the game when, after drawing a Memory Lapse out of Okamoto's hand with a Duress, played Braids.

2 Wrath of God 4 Fact or Fiction