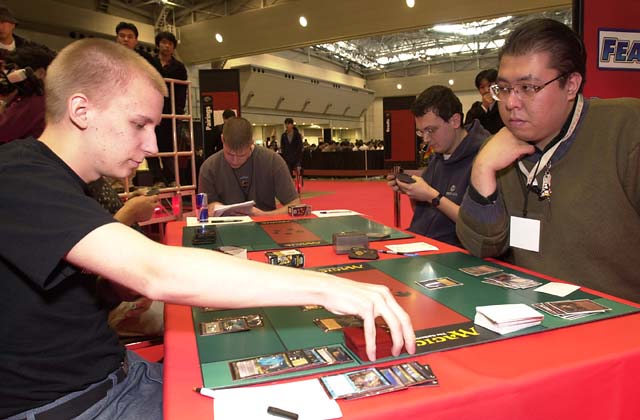 The first round of a Constructed Pro Tour is always an exciting time. All of a sudden, the best technology is unleashed on some unsuspecting opponent, and there's a revelation that sweeps across the room as to what the format is all about.

These two last clashed swords at PT Mainz, where Råde emerged victorious. However, he dropped off the Magic scene for two years shortly thereafter. Fujita has, by contrast, been enjoying success. He finished one match out of the Top 8 at Pro Tour Los Angeles. Both are playing decks with plenty of removal, discard, and what some say is the most powerful card in the format: Yawgmoth's Agenda.

Fujita saw trouble coming in game one with his turn-two Addle. He chose Blue, catching Fact or Fiction, but left his opponent with Yawgmoth's Agenda and plenty of land. Råde began the slow beats with Ravenous Rats and Nightscape Familiar. He played a second Rats, pressuring Fujita's empty board. Fujita discarded a second land.

Fujita tried to shut down his offense with Flametongue Kavu. It deep-sixed a Rat and stood in the way of his two attackers. Råde untapped and Probed his hand. Fujita lost Urza's Rage and Flametongue Kavu, his last card presumably better than those two. This gave Fujita a window to swing with the Kavu. He played a Rats of his own. Råde discarded a land.

Råde Maliced the Kavu at the end of Fujita's turn. He Recoiled his opponent's Familiar (which Fujita discarded) and attacked. Fujita chose not to trade Rats. He had no play of his own, and had to watch as the Agenda came down next turn. Now he was facing a full plate of Recoil, Spite/Malice, Probe, Ravenous Rats and Fact or Fiction. Casting only one spell per turn doesn't seem bad when they're this good.

Fujita took the opportunity to Ghitu Fire both of Råde's 1/1's, but knew he had a long road ahead. Råde played the Rats out of his Graveyard and found that Fujita's last card was Pyre Zombie. 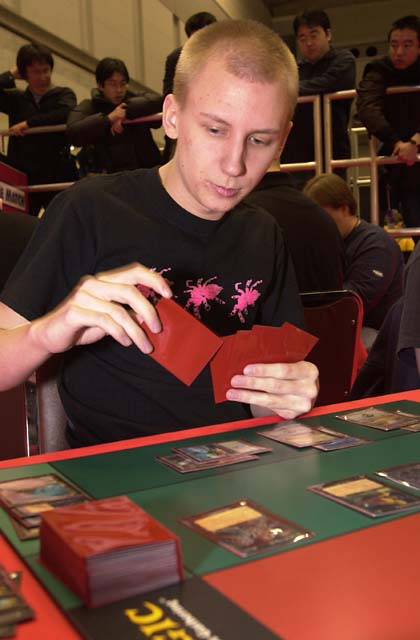 Fujita tried to keep his Zombie in the way of Råde's creatures. Råde was too busy demonstrating abusiveness to let that worry him. He Probed with kicker twice and then Recoiled three times, leaving Fujita at four land. He played a bunch of dudes from his graveyard and started trampling his opponent. With the match all but over, Fujita pretended that he hadn't seen the Undermine a Fact or Fiction had given Råde, and played Addle to lose the game, laughing as he cast it.

Both players sideboarded quickly. Fujita was the faster out of the gates in Game Two. His Nightscape Familiar was beating down, while Råde played a turn-two Salt Marsh. He Addled for blue, once again seeing his Råde's hand of goodies: Ravenous Rats, two Undermines, Fact or Fiction and lands. He took Fact or Fiction.

Fujita then walked a Pyre Zombie into one of the Undermines and Cremated the Fact or Fiction. Råde's Ravenous Rats snagged one of Fujita's. He then Recoiled the Familiar, which Fujita threw away, and played one of his own. Fujita regrew his Zombie, but lacked the land to get it into play.

Råde untapped and cast Lobotomy. He chose to eliminate the pair of Blazing Specters and their friends in Fujita's deck. This left Fujita with the Zombie and a Void. Fujita played it, naming three. Råde turned over a hand of two Undermine and lands. He put the counters in his removed from game pile, and moved over the one that was in his graveyard. Then he started picking up his deck. Fujita stopped him before he did something irrevocable, saying, "No, it's Void, not Lobotomy." Råde put his deck back and said "Whatever, I don't know these cards!"

For the next few turns, the Zombie ruled the school. It busted up Rats and flew to the head for damage. But all this wasn't enough for Fujita. He played out Yawgmoth's Agenda. This would prevent him from Recurring his Zombie, as it would be removed from the game the next time it died, but it gave his powerful spells a repeat performance.

He cycled through his deck with Cremates. His Zombie hit twice, then he Voided for 4, checking out his opponent's hand. He saw only land and Repulse. Next turn a kicked Urza's Rage ended the game.

Game three's early-game was a trip down memory lane. Ravenous Rats were minimized when Fujita discarded Pyre Zombie. Fujita had the Addle for blue, seeing Repulse, Probe, Fact or Fiction, Undermine and a land. This meant Råde had only three to his name. Fujita took the Repulse, trying to keep him low on land. Unfortunately for him, Råde's next two draws were kind.

Råde lay in wait. He Undermined a Blazing Specter and let Fujita play out a Nightscape Familiar. He cast Fact or Fiction at the end of his turn. The cards came down: Four land and a Probe. It was an easy decision on both sides, Råde scooping the Probe. He cast it with kicker next turn and caught Fujita's Agenda. When Fujita brought his Zombie back to hand, Råde was ready with Lobotomy. This left Fujita with only a Ravenous Rats.

He played them out as well as the Blazing Specter he drew. Råde lost a Rats and an Undermine. He had a Recoil to put an end to the Specter's nonsense. Fujita drew Void, and fearing the power of his opponent's Agenda, cast it for 5. Råde showed him Fact or Fiction instead. 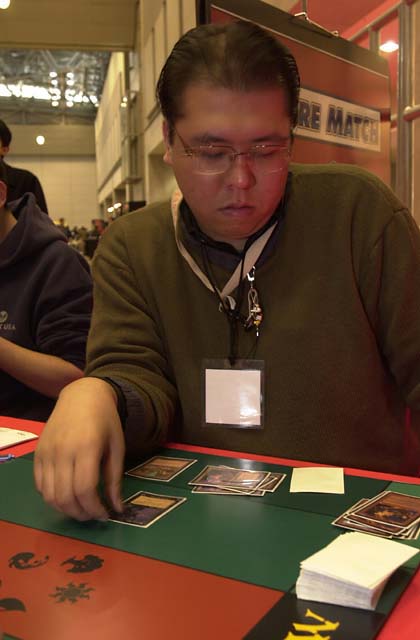 Råde cast it, and followed it up with a Probe, digging for an Agenda. Fujita had an empty hand and could only swing for three with his Zombie and Rats. A second Fact or Fiction showed an Agenda and four cards that couldn't matter. Råde waited a turn to play it so that he could have Undermine backup. Fujita reached over to assess his opponent's twenty-card graveyard and Råde fanned the whole thing out, saying "Everything, there's everything in there!"

Fujita had no room to maneuver. Råde played out an army of 1/1's and Recoiled away his defenses. However, Fujita saw a slim hope. He Urza's Raged Råde at end of turn, and Råde cast Undermine out of his graveyard for damage. This left Råde at 9 with no counters in his graveyard. Fujita looked at his ten land and pounded his deck, calling for Ghitu Fire. He flipped over a land.