David Williams (Twitter @DWPoker) and Christian Calcano (Twitter @CCalcano) sat down to the first round of Pro Tour Dark Ascension in Honolulu to play a brand new Standard format. Williams, the more accomplished of the two players, has been to Honolulu more than once for the Pro Tour. For New Yorker Calcano it was his first time competing in Hawaii, and the two chatted amiably as they waited for the round to start. 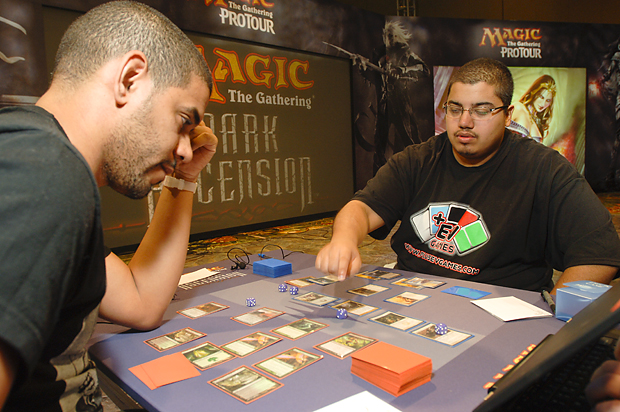 After winning the die roll and choosing to go first, Williams watched as his opponent was forced to take a mulligan. Getting underway after his opponent kept the grip of six, Williams wasted no time putting the hurt on Calcano. A Birds of Paradise accelerated out a Strangleroot Geist and a second Birds of Paradise before Entomber Exarch allowed him to Duress Christian. That revealed a hand of Moorland Haunt, Plains, Hero of Bladehold, Geist of Saint Traft, and Leonin Relic-Warder.

Calcano's only early action was a second-turn Honor of the Pure, just fast enough to sneak in under the Exarch's discardful gaze, and he followed it on turn three with his Geist of Saint Traft. The 2/2 was soon joined by Hero of Bladehold while Williams added Glissa, the Traitor to his side of the battlefield. The 3/2 Glissa, the Traitor became much better almost instantly as a Precursor Golem joined Dave's team; if the 3/3 Golem ever died he could return it using Glissa, the Traitor by simply killing one of his opponent's creatures.

Leonin Relic-Warder munched a Golem token and the board stalled with neither player being able to attack. Oblivion Ring for Christian changed that equation, removing his opponent's Glissa, the Traitor and allowing the New Yorker to swing with his team. Doing so meant picking up two Soldier tokens from Hero of Bladehold and an Angel from Geist of Saint-Traft, and Honor of the Pure and battle cry made the combat math incredibly complex. "Let me count it up," Williams said, doing some mental math, " 3, 6, 18, 24…looks like I need to do some blocking." 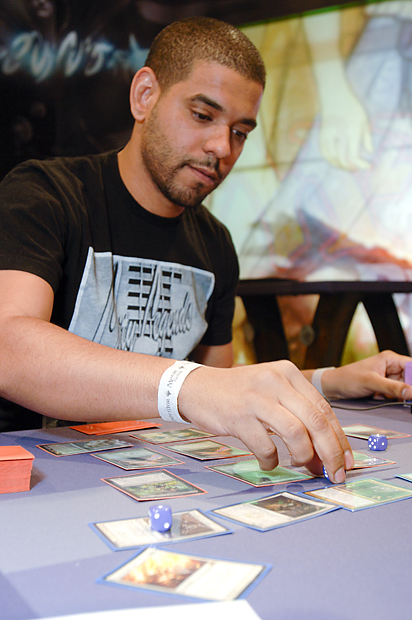 Battle cry and Honor of the Pure can result in some brutal beatings. Williams makes his blocks in order to stay alive.

At 4 life Dave managed to keep his head above water, but his odds were looking long and he didn't have a lot of time to come up with a solution. A Birthing Pod gave him a chance: he used Birds of Paradise and went to 2 life to get Phantasmal Image. He used it to copy his opponent's Relic-Warder, exiling Calcano's Oblivion Ring. That brought Dave back his Glissa, the Traitor and gave him the chance to recur Ratchet Bomb for value against Christian's team but the series of plays left him at a precarious 2 life and with an opponent who gave no indication he was concerned with the turn of events.

The next combat step was as complex as the last and left Christian with no creatures and his Oblivion Ring back, once again targeting Glissa, the Traitor. His opponent was left with no creatures as well, but he did have Ratchet Bomb and Precursor Golem in his hand. Post-combat Christian cast a Doomed Traveller, a card his opponent wasn't happy to see. "A one-drop," Williams muttered, "I would have been in it if you hadn't had a one-drop." He scooped up his cards, dead to the Traveller, and they headed for the second game.

For the second time in as many games, Calcano was forced to mulligan while his opponent enjoyed the benefit of being on the play. The mulligan put Christian under significant stress early as he failed to cast anything over the first few turns while his opponent exploded to the battlefield with Strangleroot Geist, Glissa, the Traitor, Ratchet Bomb, and two Birds of Paradise. The first play for the white-blue player? Mirran Crusader, whose protection from black and green made it almost invincible against Dave, who was playing exactly those colors.

The 2/2 forced Dave to slow down his attack and Christian doubled down with a second copy of the Crusader. For a moment it looked bad for Williams but he cast Massacre Wurm on his turn to wipe Christian's board and they headed to the third game after just five minutes of play.

The final game underway, it was Williams' turn to take a mulligan while his opponent got to keep his hand. Doomed Traveler led the way for Christian as the players commenced their game, and Dave tried to put up some defense with a Perilous Myr. His opponent used Dismember to take the lowly 1/1 out and revealed why he valued the destruction of the minor threat when he cast Mirran Crusader the following turn. A second soon followed and it looked like Williams was in trouble. 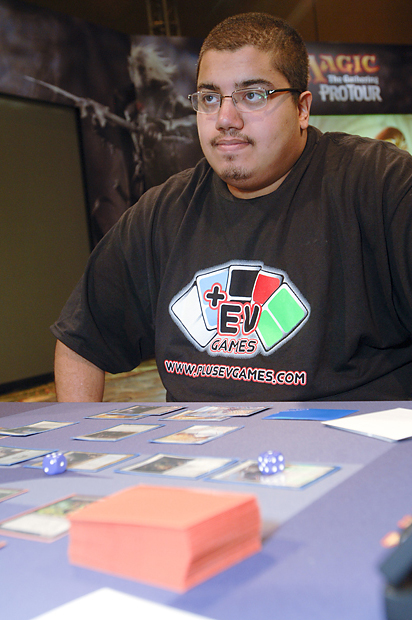 Looking to stay alive in the match Dave cast Glissa, the Traitor with an eye on getting his Perilous Myr back but in order to do that he'd need to kill one of his opponent's creatures. "Those guys are rough," Dave opined, staring despondently at the pair of Mirran Crusaders beating him down. "Maybe I shouldn't have cast my Perilous Myr on the third turn. I thought you'd have Oblivion Ring, which I was fine with…"

Down came Birthing Pod from the pro, and he cashed in his Glissa, the Traitor to hunt up a Solemn Simulacrum. That kept him at 5 during his opponent's next attack, but when he drew for the turn and revealed a grip of all land the match was over with Calcano leaving as the victor.