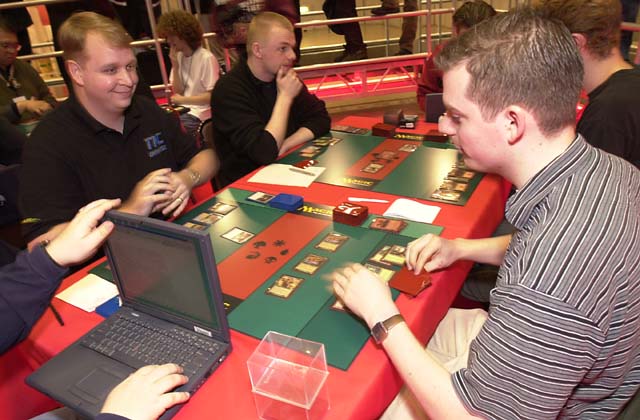 There's been a lot of talk about the merger of Mogg Squad and the European Alliance. I doesn't matter whether you can call them Team Godzilla or Nameless Race or Squandered Resources, you know they're going to be a factor at Pro Tour Tokyo. Another team which hasn't gathered as much attention, but might be just as important and powerful is the alliance between Dutch players Kamiel Cornelissen, Noah Boeken, and Ryan Fuller (who's actually Canadian, but has been living in Amsterdam) and the Ruel brothers. Those guys have been dominating the European Grand Prix circuit this year and have 22 Grand Prix Top 8's in the last twelve months alone. Both teams put their technology on display in a round one feature match between Scott Johns and Kamiel Cornelissen. Both players have been having outstanding seasons and are right in the thick of the Player of the year race.

Johns played a turn 2 Meddling Mage against Kamiel "the next Finkel" Cornelissen. All he had to work with for information was one Mountain, so he named Skizzik. Kamiel next played a Forest and a Thornscape Familiar. Johns attacked into it and Repulsed his "Pikula" after damage was on the stack. With more information to work with when he replayed the Mage, Johns named Thornscape Battlemage. Then he played a second one and named Flametongue Kavu. Team Godzilla's deck for this event is an aggressive blue/white control with Pikulas, Stormscape Apprentice, Voice of All, Galina's Knight, and four maindeck Crimson Acolytes. Zvi told me on Thursday that "we didn't break the format, but we think we solved it." 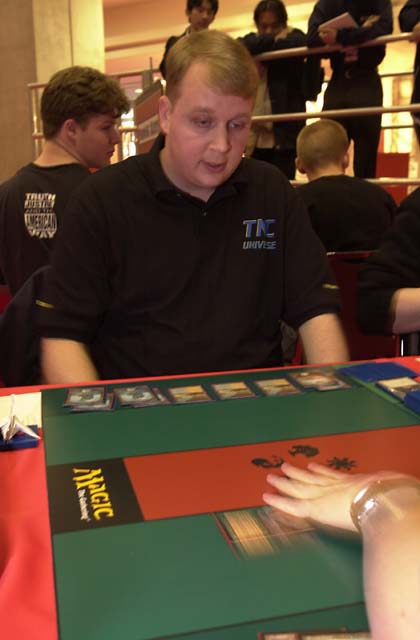 Scott Johns Johns giggled when his turn 5 Fact or Fiction revealed the super high tech Crimson Acolyte (along with two copies of Voice of All). Team Godzilla believes the Acolytes (along with the Galina's Knights) are good against both the red/green beatdown decks (like Kamiel's) and the controllish black/red "blow stuff up" decks that a number of other players are thought to be running. Kamiel put the Acolyte with two lands and Johns decided to take the two Voices. Kamiel showed off some tech of his own by playing two Blurred Mongooses (Mongeese?!). They're pretty good against the black/red and blue/black/red control decks that are expected to make up a large chunk of the field, but they don't do much against Voice of All set to "green."

Johns looked like he was in control with the two Voices and an Apprentice while Kamiel was stuck on three land. However, Kamiel used Thornscape Battlemage to destroy the Apprentice, Urza's Rage to kill one Voice, and eventually used Keldon Necropolis to destroy the other one. Johns drew nothing but land and permission in the meantime, so Kamiel's Mongooses were enough to carry him to victory. Johns slammed his hand down in disgust after the game, lamenting "if I ever get a good draw against you, look out!" The two played in the next to last round of the last Pro Tour (in Los Angeles) and Kamiel won that match on his way to his second consecutive Top 8. 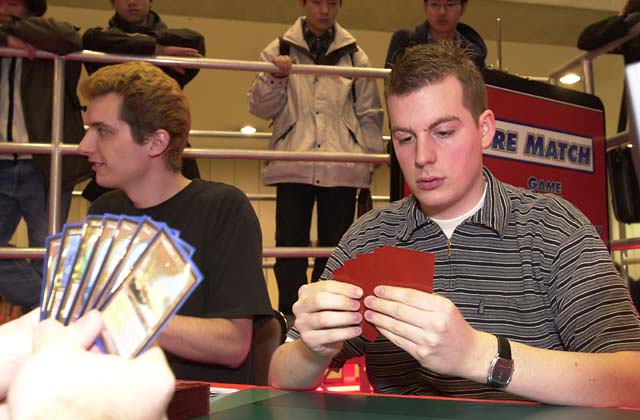 Johns played a pair of Galina's Knights early in game 2. He traded one for a Thornscape Familiar while he kept serving with the other. Kamiel had a fairly expensive hand consisting of Kavu Titans and Skizziks. Johns first Repulsed a Skizzik and then Absorbed it. Kamiel once again had a Necropolis to neutralize Johns' pro-color creatures. He didn't really it though because Johns drew into another pocket of land and couldn't follow up on his early tempo advantage. Johns never found an answer for Kavu Titan, complained for a bit about his poor draws (they were indeed both really weak with many more land than spells), insisted that their deck "beats that deck like 75%," and then finally regained control of his emotions and apologized for being a bad loser.