Round 1 Feature Match: Set that Alarm!

Nationals is not the tournament it used to be. Once upon a time this was considered the hardest Magic tournament in the world, but those days are long past. Current times reveal only three U.S. players in the Top 25 of the Player of the Year race, two of whom did not make the trip to Atlanta this weekend. Thus it can be hard to find star matchups among the field's 161 players, especially in the early rounds. 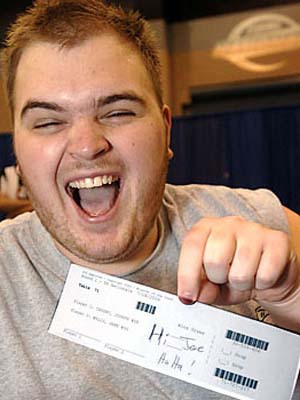 Gabe has a special message for Joe.

Of course, a little digging often turns up some gold. When my eyes glanced over the pairings, I saw Pro Tour-Prague Top 8 member and hometown pro Joe Crosby squaring off against Magic's mad jester Gabe Walls, and knew I had struck gold.

Until I got to the table, that is. Crosby apparently decided showing up for round 1 was not worth the effort, so Gabe got a free win to kick off his Nationals experience, and Joe presumably got an extra 40 winks.

However, because we are dedicated to bringing you the best in Magic coverage, we join the Billy Postlethewait vs. John Pelcak match, already in progress. Billy is playing Heartbeat Combo while Pelcak is running his typical aggro concoction, this time preferring the white and black beatdown in combination.

Billy P. lost Game 1 because he didn't mulligan his hand, and was rewarded with the chance to play first in Game 2. Pelcak had to mulligan, but came out of the gates well, with Isamaru, Hound of Konda and Dark Confidant his first two plays. Billy was doing fine as well, opening with Sensei's Divining Top and a turn 3 Sakura-Tribe Elder.

Persecute Green from Pelcak on turn four kicked in the full-blown blowout, forcing Billy to drop all four cards in his hand - two Heartbeat of Spring, Naturalize, and Kodama's Reach hitting the bin. This turned what looked like a certain win for Billy into an almost certain loss. Billy cast a Carven Caryatid to stave off the beats, but Mortify dispatched the wooden defender, and Pelcak smashed in for the win.