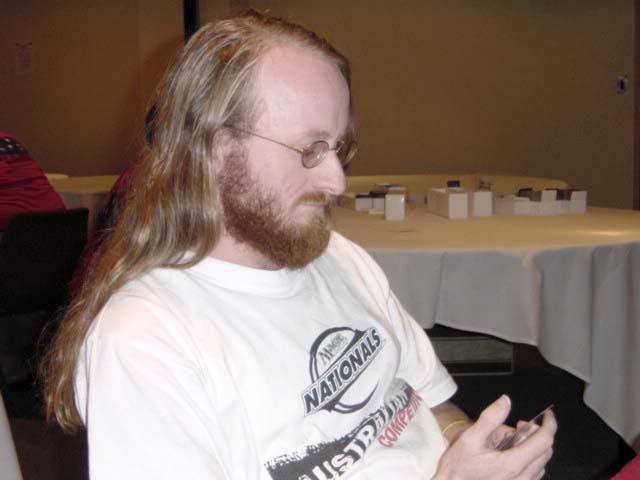 After walking away from the table of death, a draft table which included last years standard champion Michael Doecke, last years National Champion-Stephen Cambell, last years Draft Winner Dane Coltman and Top 10 ranked player Early Nguyen, both players sat down and discussed the draft. Nguyen was playing a B/U/W deck while Campbell was playing a R/U/B deck and after winning the flip Nguyen decided that he would play.

Seeing his opening hand Campbell exclaims, "Way to start off nationals with a bang" as he places his opening hand back into his library and mulligans down to 6 cards. He is still the first player to play a non-land permanent as on turn 2 he casts a Nightscape Familiar and backs it up on turn 3 with Reckless Assault. Nguyen on the other hand can only play land for the first 5 turns before casting a kicked Duskwalker. Campbell attacks with the Cavern Harpy he cast last turn and leaves his Familiar back to keep Nguyen's Duskwalker at bay. The Cavern Harpy looks like it may go all the way on its own as Early cant find a plains to cast the white spells that are building up in his hand and after being attacked down to 6 life, he is then pinged out with the Reckless Assault.

Both players are forced to mulligan in game two and again it is Campbell that comes out faster as he casts first turn Nightscape Apprentice and then backs it up with a turn 2 Cavern Harpy. Nguyen then plays a Tower Drake and the two trade blows for a turn while Campbell recasts the Apprentice and brings down a Tower Drake of his own. Nguyen casts a Mourning on the Tower Drake and then Hunting Drakes a freshly cast Hooded Kavu a turn later, building his airforce. Since Nguyen had to tap out for the Hunting Drake Campbell seizes his opportunity and bounces the Harpy and gates out the Mourned Drake but it costs him the tempo. Nguyen casts a Samite Pilgrim to keep combat in his favor, and later casts a Silver Drake, overwhelming Campbell with his vast army of fliers. 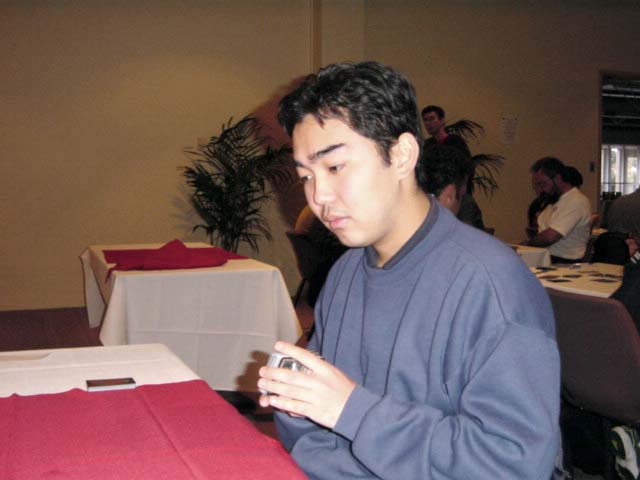 Going first, Campbell plays a turn 1 Tidal Visionary which is later met by a turn 4 Tolarian Emisary from Nguyen. Stuck for a black mana source Campbell casts a Turf Wound and then a Zap targeting Nguyen. Campbell is forced to go digging deeper and deeper into his deck in search of the land resource that he's missing. Nguyen casts a Treva's Attendant to help beat down Campbell quicker and when a kicked Faerie Squadron enters play on Nguyens side Campbell has no choice but to scoop up his cards, drawing all but 3 of his non black sources of mana.