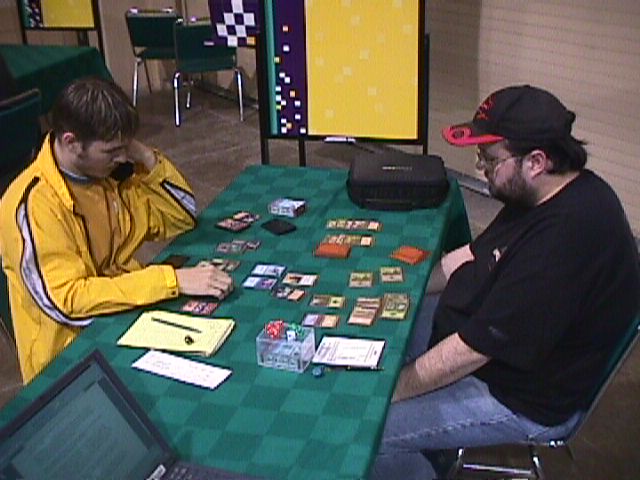 Tim Bonneville vs. Richard Stephens Tim Bonneville of Augusta is the current Amateur Champion, having won the title at Origins in Columbus this past July. School has kept him busy as of late, and this Grand Prix is his first high-level event. His first round opponent is Richard Stephens of Glencoe, Alabama, also playing in his first big event. Both players were quite composed as the match began.

Richard, playing green/black/white went first and mulliganed. But his 6-card hand made life rough for Bonneville with a turn-3 (and turn-4) Call of the Herd.

Richard StephensBonneville, playing what looked like blue/green/black, muttered, "Oh, trying to play Type 2 on me," and was forced to save himself damage by blocking with his Escape Artist and bouncing it. Bonneville eventually traded an Aven Windreader for one of the tokens, and then surprised Stephens by sacrificing his Bog Wreckage for red mana to kill the other token with Acceptable Losses. He then Morgue Thefted his big Aven and recast it, allowing him to finally stabilize at 7 life.

Stephens kept running his 2/2's and 1/3's into Tim's Aven and new Elephant Ambush token to sneak in damage, and was managing to keep his side of the board full with Morgue Theft and Gravedigger tricks.

Good blocking and a timely Aether Burst by Bonneville ("I'm at two, and you're at twenty? It doesn't seem fair.") prevented him from dying to Stephen's Elephant token, and Tim quickly went on the offensive with his Windreader and a Balshan Griffin. A few turns later, Bonneville's bomb - Aboshan, Cephalid Emperor - showed up, and even with four colors of land in play, he still had enough islands to use the legend's mass-tapping ability to neutralize Stepehn's entire team. 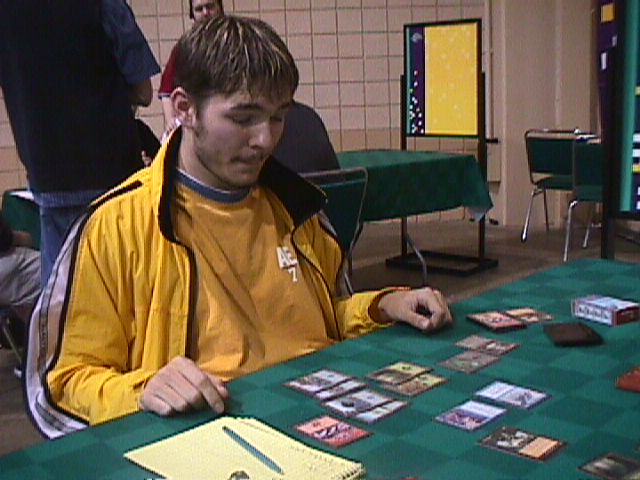 Tim BonnevilleBoth players began game two with some small creatures, but Stephen's Blessed Orator made combat difficult for Bonneville. When the Georgian tried to get something going with Elephant Ambush, the Alabaman answered back with his own, which was 3/4 and, not surprisingly, should have won the fight. Unfortunately, neither player noticed and Stephens buried his token. The game progressed for two more turns before a judge was called, and the judge was unwilling to back the game up that far. Tough break for Richard.

Bonneville eventually got the Cephalid Emperor into play via two sac-lands, and its tap ability, combined with Moment's Peace, was enough to keep him alive until time ran out.