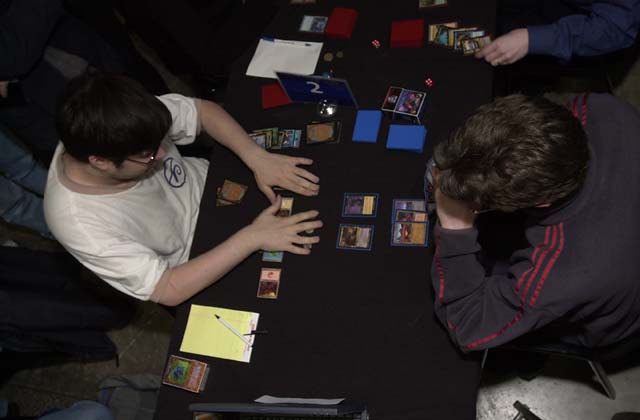 Team Godzilla succeeded in taking down Pro Tour-Tokyo, but they split up before this Masters Series tournament. Warren Marsh really wanted to try out a system where he and his amazing English playtest partners Ben Ronaldson and Jon Ormerod were each guaranteed a significant amount of money via prize splits amongst the teammates. Tokyo champion Zvi Mowshowitz and Scott Johns balked at the size of the split Marsh wanted and the team more or less broke up. They still may get together for Worlds, but for this Masters the English managed to sell their deck technology to Gary Wise, Sigurd Eskeland, and Alex Shvartsman. Zvi and Scott teamed up with Kai Budde and Benedikt Klauser and both teams seemed fairly happy with their playtesting arrangements. Meanwhile, both teams decided to play Domain decks! And then Warren and Zvi got paired up against each other in the first round for a "no splits here" grudge match. However, Warren doesn't always do the same things as his teammates. He's running a black-red deck that he's probably tired of playing against Domain.

Once Marsh realized what Zvi was playing he uttered an "Oh no!" and then "let's talk about a prize split." Zvi answered with "not splashing green, eh?" Black-red decks that fear Collective Restraint - the power card that makes Domain decks viable - splash green for enchantment removal in the form of the green kicker on Thunderscape Battlemage. When Marsh played a turn 4 Darigaaz's Caldera, showing off the fact that he did have green, Zvi uttered a loud "D'oh!"

Marsh attacked Zvi's hand with a Ravenous Rats and a Blazing Specter, but Zvi used Ordered Migration to make 4 Bird tokens and traded two of them for the Specter. Collective Restraint and Questing Phelddagrif then put a halt to Marsh's offense. A second Migration then allowed Zvi to go on offense. Zvi just shrugged when Marsh pointed a Ghitu Fire for 5 at his head, but Zvi was starting to sweat a bit when Marsh followed it up with a Ghitu Fire for 6 that dropped Zvi down to 4. Marsh kept asking Zvi if Zvi had drawn the Global Ruin that would lock up the game yet, but Zvi couldn't find it. Zvi did find a Dromar's Charm and its "gain five life" mode was used immediately so Zvi could breathe again. Marsh did play out enough land to win if he could topdeck a third Fire, but he only had two turns before Zvi's Hippo flew over for the kill and there was no Fire on top of his deck. 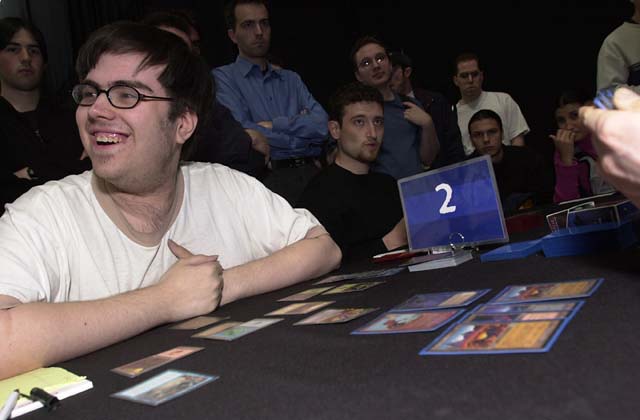 Zvi used Fertile Ground to get out a turn 3 Collective Restraint before Marsh could play his Blazing Specter. Marsh nonetheless managed to clear out Zvi's hand thanks to Addle, Ravenous Rats, and Bog Down. However, three Bird tokens prevented him from attacking even if he paid for the Restraint. Zvi soon drew Allied Strategies (for 4) off the top of his deck and suddenly he had a hand full of cards again. Marsh did have a Thunderscape Battlemage to deal with Zvi's potential Restraint, but he had no green mana so he had to settle for knocking two of Zvi's new cards away.

Zvi's next play was Questing Phelddagrif - that was the only one of his four new cards that he actually got to play because Marsh followed up with another Bog Down. The Hippo wasn't in Zvi's deck when he showed up at the tourney site this morning, but black-red was by far the most popular deck in the Gateway and Zvi - ever the metagame master - pulled Rith out and put the Hippo (and it's "protection from black and red" ability) into his deck. When I talked to Zvi before the tournament he complained that this tournament posed the worst kind of problem: "There is no solution." So Zvi decided to play "the last, best chance to have some fun." Five Hippo attacks later, Marsh was dead and Zvi was complaining that he needed more Phelddagrif practice - "I played badly, but we made the right metagame call." Marsh answered "so did we," but Marsh didn't go with the rest of his teammates and so he was out after 1 round. 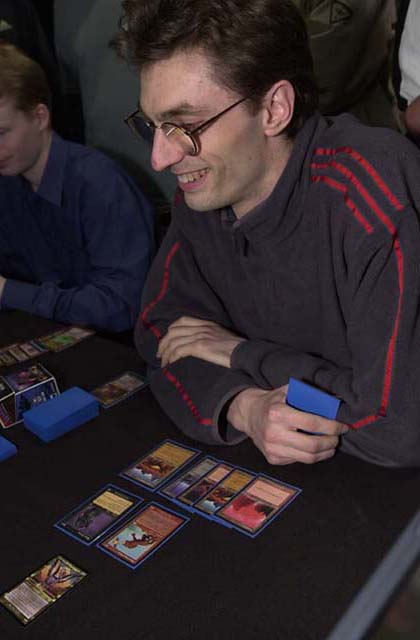 Dragonlord Brian Kibler - who was unqualified for the Masters, but did play Domain in Tokyo - had worked with the English on their Domain deck. He explained in Marsh's defense that even Warren, according to Kibler believed Domain was the best deck, but Marsh had developed a cold and didn't want to play a deck that would require him to think a lot. "It's the best deck," insists Kibler. "It has the most powerful cards in the format and it's hard to deal with and it can run answers to every other deck (because of its 5-color mana base)," explained Kibler. "The mana base was off a bit in Tokyo and the few of us that played it got unlucky." Another change to Domain since Tokyo that some players have made (including Ben Rubin and Baby Huey - the third team that opted to run it in this Masters) is to include Obliterate and Elfhame Sanctuary.

Domain may have gone 0 for the Top 32 in Tokyo, but it was wildly popular in this Masters Series and it will be quite interesting to see how things turn out.