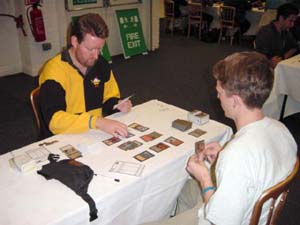 Thomson is playing a red-black-white deck and Meyer appears to be playing red-black. Pyre Zombies are featuring heavily on both sides in round 1, but, due to a double mulligan, Meyer lacks the land to take advantage of his. With a Skizzik from Thomson dealing large amounts of damage to Meyer, he quickly scoops.

Thomson's shirt is the yellow and black Team Gnome shirt, which has been a fixture of British magic tournaments since the at least 1995. In his day, Thomson was one of the best Scottish Magic players, and he was one of the driving forces behind Scotland getting its own National Championships. Now, he's been out of Magic for two years, and the lack of practice is showing, with a few silly mistakes.

Game 2 shows that Meyer is playing a much more similar deck to Thomson's, with a turn 3 Plains. Thomson shows that he believes land destruction to be viable in the format, with turn 3, 4 and 5 Vindicates on two of Meyer's Plains and a Mountain. Meyer is able to draw more land, and can deal with every threat that Thomson plays. Skizziks run into Emblazoned Golems. Phyrexian Ragers run into Goblin Soldier tokens. Thomson is still on the offensive, but can't get through for more than a couple of points each turn. Again, having the land advantage seems to be in Thomson's favor (Meyer has actually drawn three more land this game, but was forced to sacrifice them to the Trenches). A Death Grasp from Thomson finally takes the game and the match.

Meyer and Thomson agree on at least one thing, though - they will both be supporting Germany in the football tonight (Meyer is German). 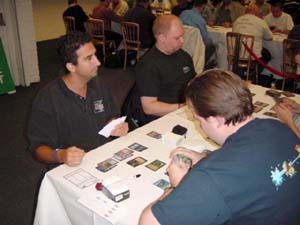 Another comeback match features Michael Debard, playing the red-blue-green deck that has been popular in the qualifiers and GP Trials this weekend. His opponent, Sandro Stettler, is playing a version of the red-blue-black deck that has made top 8 at several Grand Prix, as well as at PT Tokyo.

Debard takes the first game after a hard fight, with the final move being a kicked Urza's Rage, powered by ten lands and two Nightscape Familiars. He takes the second game too, in a blur too quick to be seen by anyone. Even with no byes, it looks like he may well still be a force to be reckoned with. 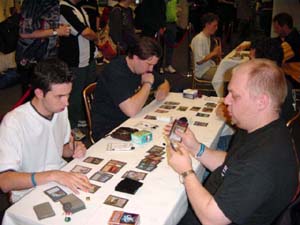 Both players are being very patriotic, playing red-white-blue decks (the same color as the Union Jack, the British flag). Walker's deck is a creatureless control deck, but Major's deck features Lightning Angels as a kill card. After a close first game, which Major wins, a draw with no red mana for Walker hands Major the match on a plate.