Round 1: The Fighting... Wellsprings?

Scars of Mirrodin Block Constructed kicked off Magic Weekend Nagoya, and the Round 1 feature match was impressive: Rookie of the Year frontrunner Matthias Hunt vs. Hall of Fame contender Paulo Vitor Damo da Rosa. The Brazilian Damo da Rosa has averaged, over the course of his professional career, a Pro Tour Top 8 in 25% of the Pro Tours he has played in. Those are impressive statistics, but Hunt is no slouch himself, having burst onto the Pro Tour scene in 2011 with top Grand Prix performances on the back of his deckbuilding prowess.

Paulo Vitor started on Plains and Glint Hawk Idol, strong indications he was playing some form of the Tempered Steel deck, an archetype that was expected to be dominant in Nagoya. Matthias opened on blue and black lands, his first spell being an Ichor Wellspring to cantrip into more cards, followed by Tumble Magnet. Blade Splicer netting a 3/3 Golem and Hero of Bladehold gave the Brazilian a heady board position and forced his opponent to figure out a plan that would allow him to stay alive. 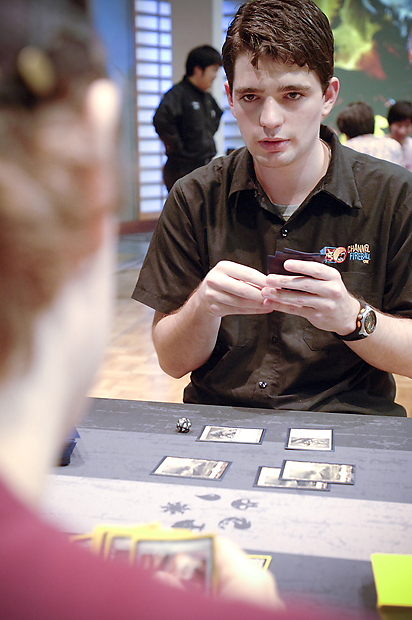 Paulo Vitor Damo da Rosa is one of the most formidable pros playing today.

Hunt used Go for the Throat and Dismember to remove his opponent's hero and Golem, reducing his opponent's clock to a much more manageable level. A follow-up with Tezzeret, Agent of Bolas to turn his Wellspring into a 5/5 creature put Matthias firmly into the driver's seat, and he cast a Mycosynth Wellspring to find himself more lands and to generate more 5/5s with Tezzeret. A second Tumble Magnet for the control player allowed him to lock out his opponent's team entirely and Paulo Vitor Damo da Rosa found himself down a game to the American rookie.

"It's my fifth feature match, and every time I've won Game 1," Matthias mused, as the two players shuffled for the second game. His opponent laughed, and the American pointed out that he was actually missing a large math competition to play at the Pro Tour. "I'm a head coach for the competition; it's the first time I've missed it and it was so I could play in the Pro Tour."

Facing an early-round defeat after the first game, Paulo found his chances diminished as he had to open the second battle on a double mulligan. His five-card hand was not favored against his opponent's control deck, which emphasized card advantage in nearly every spell it cast. A Signal Pest from the super pro was handily dispatched via Virulent Wound, and a Mycosynth Wellspring ensured Matthias Hunt wouldn't be missing land drops.

The American used a Contagion Clasp to take out a Memnite from his opponent, firmly establishing control as Paulo Vitor missed third-turn action and could only watch in horror as a Tezzeret, Agent of Bolas hit for his opponent and began turning artifacts into 5/5 attackers. Desperately trying to come up with some type of game plan, Damo da Rosa cast Leonin Relic-Warder to exile a 5/5 Wellspring. 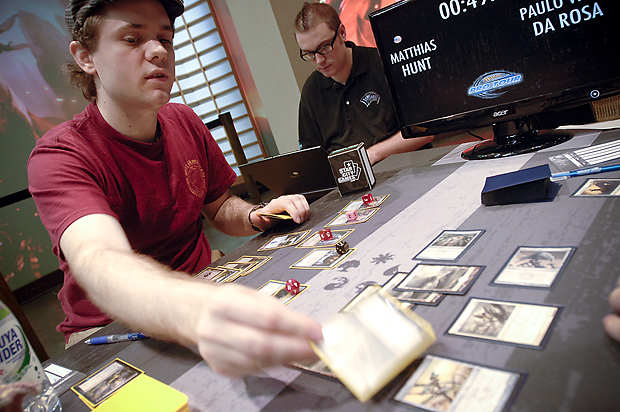 The play did little to impede Matthias, who continued to dominate the battlefield. He switched gears using his Tezzeret to begin digging for artifacts, then cast a Consecrated Sphinx to draw himself even more cards. A Hero of Bladehold for his opponent allowed the white deck to knock the Tezzeret out but at the cost of the 3/4 itself via a block from Consecrated Sphinx. The 4/6 flyer took to the air the following turn, allowing Matthias to dominate the red zone, and a Black Sun's Zenith allowed him to ensure he maintained control when his opponent finally resolved a few creatures in a meek attempt at a second uprising.

It was all done but for the final attacks from that point. Paulo Vitor could only look on, creatureless, while his opponent exploded onto the battlefield. Wurmcoil Engine added an elbow-drop while Wellsprings of different varieties found Hunt both cards and lands. In a few turns the match ended handily, with Matthias Hunt never having to break a sweat.