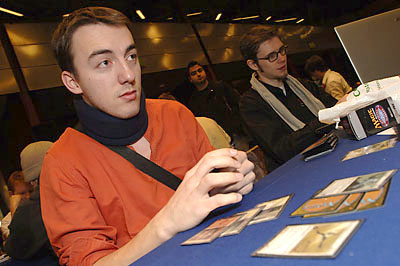 Olivier Ruel makes his return to the Tour.here were a couple of pros who didn't make it to Worlds in Paris but who have Magically returned to the world of Magical cards this season in Geneva, just the other side of the French border. Olivier Ruel has returned from his DCI suspension from last season, still with enough points to be level 4, while Sam Gomersall of England has simply taken the time to renew his passport and is back playing on the Pro Tour despite describing this event as "my prerelease," having not drafted Planar Chaos before this weekend and drafted Time Spiral a total of 6 times, including a Grand Prix and a Pro Tour.

The first game saw a mulligan from Sam on the draw, but it was him that put on the early pressure, curving out nicely with Gemhide Sliver into Herd Gnarr, followed by Scarwood Treefolk, to get in some early damage. Meanwhile Olivier missed an early land drop and only had a Sinew Sliver actually in play. He did have two Ivory Giants for turns one and three suspended, but in the face of a concerted attack, it looked that the gradually growing board of white monsters he was building might not simply be able to run in when they came out.

Slowly but surely Ollie's board filled up with white, including such quality bodies as Knight of the Holy Nimbus and Cloudchaser Kestrel. Unfortunately, in the same time, Sam had found Pardic Dragon and an Ironclaw Buzzardiers, who became significantly more concerning for Ruel when enchanted with Undying Rage.

In just a few short attacks, Olivier was teetering on the brink of death. He swung, in order to vaguely keep in the race, then passed with land untapped and plenty of cards in hand.

"I wish I knew any card in this format… even one card," griped Sam, scratching his shaven head, now conveniently kept warm by a Pro Tour Geneva beanie.

"Me, too," retorted Ollie, who admitted that he did have a trick. Sam attacked with just his dragon and the Buzzardiers, forcing a Dawn Charm from Ruel to fog the turn.

"That was the right attack."

From this point the game was effectively over. Olivier was too far behind in life to stave off large flying beats for long, and when a Havenwood Wurm ambushed his giant on the swing, that was game 1. 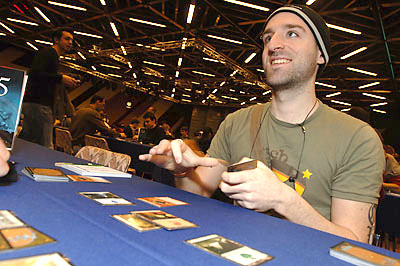 Sam Gomersall is all smiles.

For the second game, the tempo shifted dramatically. While Sam had the first play of the game in Goblin Skycutter, it died to Grapeshot in short order. The Buzzardiers came back to play in game 2 but seemed somewhat outclassed by Malach of the Dawn on Ruel's side of the board.

Undying Rage from Sam again seemed like a nifty trick, but this time Olivier was ready with Cloudchaser Kestrel. Sam's game slowed somewhat as he replayed the enchantment, which had bounced back to his hand, and was then stymied a second time as Whitemane Lion allowed the Frenchman to repeat his "little Time Walk trick."

Sam played a Giant Dustwasp and had a suspended Durkwood Baloth a few turns off, but he was clearly far from being in the game. A hard-cast Ivory Giant allowed for a big swing from Olivier, and a second swing was enough to finish the Englishman.

Olivier led with a suspended Ivory Giant following Sam's "land, go," and then used a Mana Tithe to stop Ironclaw Buzzardiers so that the board wouldn't be too busy before the giant came in. Sam really liked those Orcs, though, and after seeing a Cloudchaser Kestrel from Ruel, he played another Buzzardiers.

Olivier suspended a second Giant and then used a Brute Force to allow his Kestrel to take down a Stormcloud Djinn from Sam in combat. With just his buzzard, and indeed its rider, Sam's board looked a little forlorn. He took his beats from the first Giant swing, and then invited Stonebrow, Krosan Hero to the party. Fortunately for Sam, Stonebrow allowed for his swings to be pretty hefty, regardless of the fact that he was rather lacking in monsters. The Frenchman was suddenly down to 10, compared to Sam's 15, following an attack from Sam, who had juiced up his 2/2 with Keen Sense. A Watcher Sliver came down for Olivier, and Sam played Flowstone Channeler and passed. 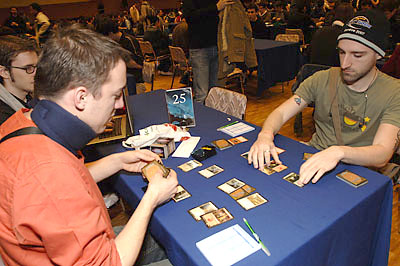 Gomersall rocks the PT Geneva beanie while Olivier sports… What is that, anyway?

"Do you know who's going to win?" asked Olivier

"I guess it kind of depends on what card is on top of your deck," declared Sam, looking at how low his opponent's hand size had gone.

When he swung with his team, though, and had a Strength in Numbers to effectively give another one of his team +2/+2 on top of the regular bonus, there was little for Olivier to do but extend his hand. He didn't have his fog this time, and without it, in spite of a better developed board, he succumbed to Sam's beaters.