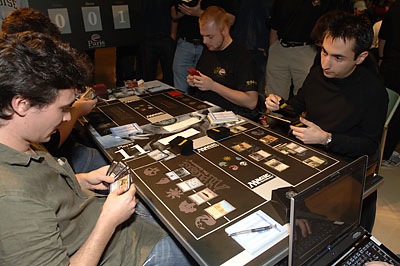 guys have met countless times before on the European GP circuit and belong to the most consistent crowd among the Pro Tour regulars. His consistency has carried Raphael to his 49th consecutive Pro Tour, an achievement honored by his introduction into the Magic Pro Tour Hall of Fame this very morning. It's their home country (even though Raphael is living in Sweden), they are two friends up on the very top of the Magic summit, and they are about to kick off the 2006 World Championships in Paris!

Pierre Canali brought a blue-white control deck to the table, sporting Teferi and Skeletal Vampire. Raphael was siding with the John F. Rizzos of the world and played Crypt Champion in combination with Saffi to abuse Soul Warden and Teysa.

Kai Budde, who was facing Nicolai Herzog next to this match, pointed to the two French guys and exclaimed: "These guys know the cards!" Pierre did know them well enough indeed to realize that his first seven were not what he wanted, and started off with a mulligan.

Wall of Roots from Raphael indicated a game that would not be likely over in the first few turns, especially with Pierre showing Island and Adarkar Wastes. The Wall accelerated Raphael into an early Loxodon Hierarch, while Pierre was digging with Think Twice. A second Hierarch, looking to seal the deal early, was met by Pierre's Rune Snag. 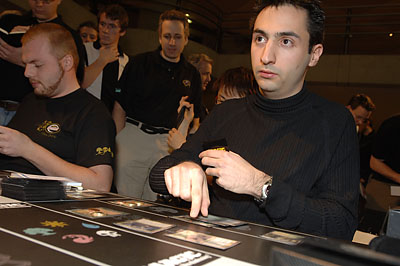 Desert and pass the turn did not do much for Pierre, who was down to 12 by now and needed some kind of answer to the Hierarch and the newly-cast Teysa from Raphael. The salsa instructor was in deep thought, weighing his options, and decided to Repeal the Teysa. Stuck on four lands - three lands and a Desert, really - Canali lost his usual smile. He could Rewind the Teysa, but the Hierarch had slipped under his counter wall early on and promised to get the job done.

A maindeck Cremate from Pierre did nothing relevant. From the next table, Kai asked "Monsieur Levy" to give him the coins back that Levy had borrowed for counters - and the -0/-1 counters went over to become time counters on Kai's Lotus Bloom.

Finally, Pierre plunked down Sudden Death, killing Hierarch and leaving Raphael's Saffi useless - but the smile wasn't back on Pierre's face. At 2 life, he took his time to think. Did he have any outs against Raphael's board of Saffi and a fresh Crypt Champion? He had none, and on they went to Game 2!

Raphael took out a Tamanoa, a Chord of Calling, 2 Mortify, a Hierarch, and a Congregation of Dawn to add in Persecute and Castigate. Pierre removed a Shadow of Doubt, a Rewind, a Cancel, Seize the Soul and 2 Repeal to go for additional removal: 3 Deathmark, a Boomerang, Spellsnare and a Slay.

The lights over the feature match area grew hot, and the crowd pushed in right behind the backs of the players. Even though Worlds had just started, the atmosphere was tense already: This would not be an easy cruise for anyone, especially not facing such tough competition. While the two Frenchmen were sideboarding extensively, Kai Budde on the back table had just combo'd out with Dragonstorm against Nico's Children of Korlis.

Both players kept their initial hands. On the draw, Raphael hesitantly brought in Godless Shrine untapped and cast Soul Warden. He followed with his Hall of Fame colleague Bob Maher, Jr., a.k.a. Dark Confidant. Pierre had Last Gasp for the Human Wizard and two(!) Deserts, effectively shutting off Raphael's offense. 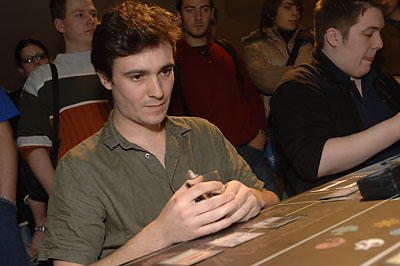 Canali and the peanut gallery

Meanwhile, Kai and Nico were sideboarding for their Game 3. "What about boarding Persecute?" Nico joked. Instead of answering, Kai pointed to Raphael: "He does! And he probably does, too," indicating Pierre. Sure enough, a turn later Raphael tapped four mana and Persecuted Pierre. "That's why I hate playing next to Kai," said the French Hall of Famer, and Nico Herzog added: "Yeah, he can read you even from over there!"

The Persecute nabbed a Teferi, revealing Skeletal Vampire and land in Pierre's hand. Raphael was fine with that, using Chord of Calling to get Crypt Champion! That plus Saffi and the Soul Warden gave him life aplenty, bordering on infinity. Pierre played Skeletal Vampire, but Raphael had another Chord of Calling, this time going for Teysa, Orzhov Scion. Of course, the Crypt Champion had ended up in the graveyard, but yet another uninhibited Chord sealed the deal, and Pierre scooped up his cards.