Round 1: Gary Wise vs. Brian Davis

As they sat down for the match Brian Davis quipped that this was the match-up of "No Block" vs. "No Shock", referring to famous play blunders they each made while under the unforgiving eye of feature match reporters.

Not wanting to dwell on mistakes, Gary revealed that Brian Davis was 2-1-1 lifetime against him although Gary took the last match between them. 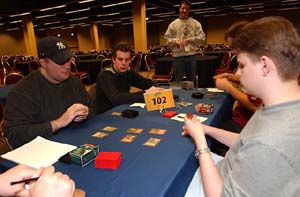 Brian mulliganed but Gary found his first seven acceptable. Brian, who was G-R opened with a Rootwalla and Gary, playing G-R-W came back with a Mongrel. The Mongrel took down the Rootwalla at the cost of two cards--one of which was Exalted Angel and received an arched eyebrow from Brian. Firebolt finished off the Mongrel but Gary calmly played another and then played a Call of the Herd on his next turn. Brian tried to keep Gary's mana at bay and used a Fiery Temper to kill a Lllanowar Elf leaving Gary at three lands for a while.

Both players made Call tokens for a few turns and would routinely trade them in combat. Then both players played morph creatures. Gary was getting low on life and was forced to block what he assumed was a Firecat with his Call token. It was a Firecat and Gary fell to seven. He fell to six on his next turn when he flipped over his Exalted Angel and promptly went back to ten.

A Contested Cliffs and a Baloth later Brian was ready for the next game. "That deck is pretty much a nightmare for R/G!"

This game was long and culminated in another memorable misplay under the harsh lights of the feature match table. We can actually just skip ahead to the end of the game.

Gary's team was being held back by two Ensaring Bridges. His team consisted of Glory, two Baloth's, an Exalted Angel, Bird, Elf, and Wild Mongrel. He also has Worship in play and another Glory in his yard with mana to activate it. Brian Davis had three Bridges in his deck and Gary had three Naturalize--a fact he had announced to Brian. The game was a stone cold lock, right?

Wrong. Gary was at one and he played and sacrificed a Wooded Foothills. As soon as he did it he winced and called over a judge to see if he could sacrifice a Baloth in response. He could not and died from loss of life, which is not covered under the Worship insurance plan. Gary had lost an unlosable game.

Brian actually assumed that Gary was playing with his head and had not boarded the Naturalizes for the second game and sided them out for the final game.

Both players made Wild Mongrels on turn two and Gary followed with a Brushhopper on turn three. Brian attempted to kill it with Violent Eruption but Gary saved it with two cards and then played a fourth turn Baloth. A Phantom Centaur materialized on Brian's turn four and the life totals had Gary at 12 and Brian at 15.

Gary's Call of the Herd only attracted the attention of a love crazed Volcanic Hammer. The Brushhopper ate a Wild Mongrel and got Gary back precious life points thanks to his Baloth. Brian played the dreaded Morph guy and passed back the turn with no cards left.

Gary played another Brushhopper--meaning he now had an extra eight points of life to play with. The Hopper ate Brian Davis' Firecat and gained back some life for his owner. Gary drew a Glory and was able to attack Brian to one with his Pro Green team. Brian ripped a Nantuko Tracer but it wasn't enough once Gary found a Contested Cliffs and another Baloth.