Round 1: Going Wilde Over Olivia Voldaren

Even with hundreds of the world's best players lining the hall in San Francisco, it's hard to imagine a better first-round pairing than American pro Patrick "The Innovator" Chapin and the reigning player of the year Brad Nelson squaring off in Standard. 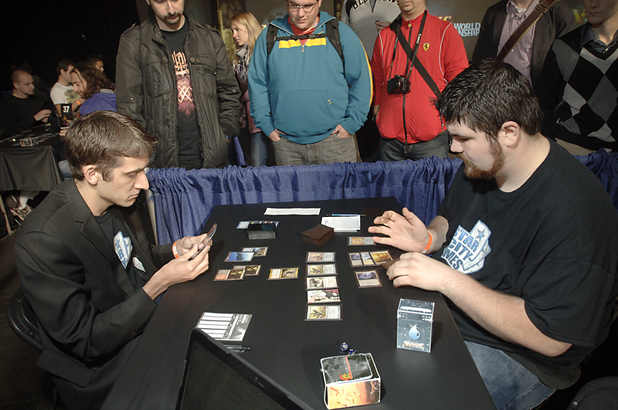 Patrick Chapin and Brad Nelson: two American pro players square off in the first round.

After a staggering year that saw Nelson rocket to the Player of the Year title in 2010, 2011 had been a quiet year for the American pro. He had only accumulated 17 pro points for the season, far off his staggering 66 points a year ago. Still, a strong finish this weekend could give him a respectable total for the season.

Nelson, on his last day as the reigning Player of the Year, is sporting the lightning-fast Tempered Steel deck, a deck that ported most of its cards from Scars of Mirrodin Block Constructed.

Meanwhile Chapin is, well, innovating. He is playing a Grixis Control deck (plus green for the flashback on Ancient Grudge) that resembles nothing the format has seen so far. It uses the card filtering of Desperate Ravings and Forbidden Alchemy to find cheap removal and bombs capable of taking over games.

Both players kept, and Nelson kicked things off quickly with a turn-one Signal Pest off a Seachrome Coast, signaling his choice of Tempered Steel. Pun intended.

He followed it up with an Origin Spellbomb off an Inkmoth Nexus and Glint Hawk bouncing the Spellbomb. The deck was capable of faster starts, but he still had Chapin on the back foot almost immediately.

The first attack brought Chapin down to 17 as he played nothing but lands until a Forbidden Alchemy netted him Limited All-Star Olivia Voldaren. The mythic rare earned a bit of a surprised nod from Nelson, who also made a 1/1 Myr with his Spellbomb at the end of Chapin's turn.

Not just a Limited All-Star!

Staring down the imposing pinger, Nelson cast Etched Champion and a second Signal Pest before passing back without an attack. The mythic rare Vampire has been the bane of many a Limited game, but it seemed possible that it could take over this Constructed match.

It did just that the next turn, when two pings took out both Signal Pests, dropping Nelson below metalcraft and allowing Chapin to Galvanic Blast the Champion. Nelson could only manage a Glint Hawk Idol before passing back, as Olivia, now a 5/5, was proving to be a game breaker.

Two more pings took care of the Glint Hawk and one more took out the Myr token, and a pumped Olivia Voldaren attacked for 8, taking Nelson to 12. Nelson tapped out to summon a 5/5 Mikaeus, the Lunarch, but nothing could stop Olivia as two more pings made it a 10/10 and Galvanic Blast took out the rest of Nelson's life total. 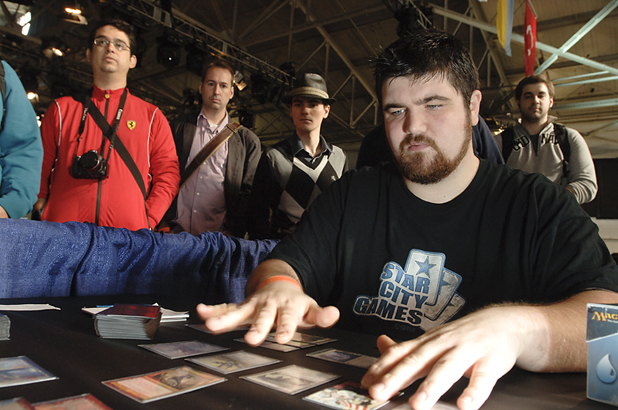 Brad Nelson's artifacts are struggling to stay in play.

Nelson, on the play this time, had Origin Spellbomb into Glint Hawk Idol and Memnite on turn two.

Ancient Grudge took out the Origin Spellbomb on Chapin's main phase, and Nelson had another Glint Hawk Idol and a Signal Pest before dropping Chapin to 17. That left Chapin facing down two Idols, Memnite, a Myr token, and the Signal Pest.

On Nelson's next potentially large attack, Chapin Galvanic Blasted the Signal Pest and flashed back Ancient Grudge on Glint Hawk Idol, falling to 14 and one poison before dropping Olivia Voldaren on his next turn.

This time the legendary Vampire didn't get to take over the game, as Dispatch cleared the way for another 3 damage and one poison, putting Chapin at 11 life and two poison.

Nelson's next attack merited a Forbidden Alchemy, but no other response as he took Chapin to 8 and three poison. Desperate Ravings at the end of turn cost him a second Olivia Voldaren.

Slagstorm cleared out the Memnite, but only the Memnite, and Nelson again attacked with a Glint Hawk Idol and an Inkmoth Nexus. Galvanic Blast killed the Glint Hawk, but Chapin went to 4 poison as Nelson dropped an Origin Spellbomb, which he used to attack Chapin to 7 the following turn. He added a Memnite to the board, doubling his already slow clock.

Chapin wasn't out of haymakers yet. Inferno Titan put a stop to the ground beats, and Nelson went back to the air with Inkmoth Nexus moving his opponent up to five poison.

An Oblivion Ring removed the Inferno Titan and a Glint Hawk came down, but Chapin had answers for those as well. Liliana of the Veil killed the Hawk and a Ratchet Bomb promised to eventually answer the Oblivion Ring.

Nelson's Inkmoth Nexus killed Liliana of the Veil, but it was the last attack Nelson would get in. Chapin found a Curse of Death's Hold to shut down the poisonous land and the subsequent Shrine of Loyal Legions. From there, it was just the tick, tick, ticking of the Ratchet Bomb up to three that provided the countdown to the return of the Titan and the two attacks it took to bring Nelson to 0. 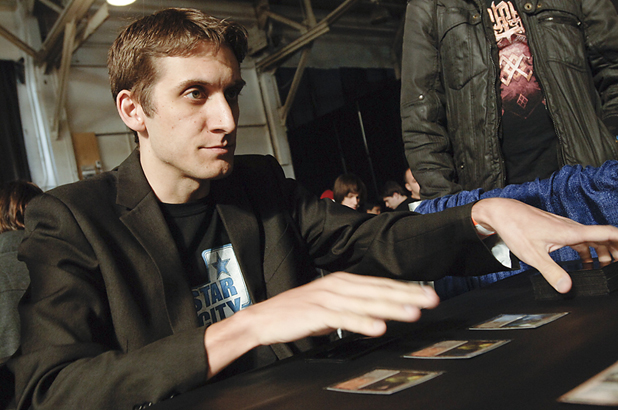