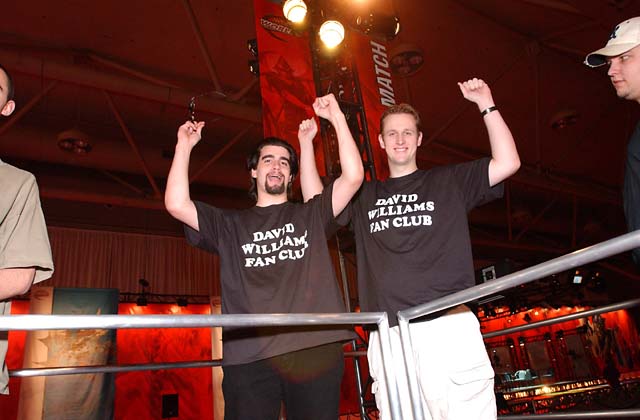 "You have GOT to be kidding me!"

That was Ed Fear's response, audible from across the room, when he learned that he was about to play a feature match against arch-rival Dave Williams. A year and change ago at Worlds, Fear (and mutual friend Bob Maher) were wearing "Dave Williams Fan Club" T-shirts. However, Williams got DQed from that event and since then he and Fear had a major falling out.

Fear served out his own 1-year DCI suspension and came back to the Pro Tour on a mission, re-claiming a seat on the gravy train and spot in the public spotlight in no time. He flew half a dozen players to Australia to compete in Worlds, he's probably the most entertaining player on Tour to watch in a feature match, and he seems to be relishing his slimy-but-charismatic bad-guy persona.

This weekend marks the first PT since Williams returned to the land of the eligible. Pat Chapin and Chris Benafel wanted to play with him, but they didn't have the necessary 50 points to qualify. Thursday night they entered the last minute qualifier with Kenny Hsiung watching from the sidelines, planning to play with Chapin and Benafel if they didn't grind in. Rumors were flying that Donnie Gallitz might actually sit in that third seat and that Hsiung would be stiffed, but we never got to find out how that storyline would play out because some time around 2am Williams, Benafel, and Chapin did grind their way into the Pro Tour.

Oh by the way, Ed Fear is playing with the infamous Andy Stokinger, webmaster of Team Academy. Pat Chapin was quick to point out "For the record, our team is not as evil as their team" Fear, Stokinger, and Roger Sorino are actually calling themselves "Evil Inc.", with Sorino joking "This is my first time being evil, it's kind of new to me." 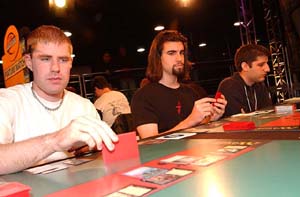 Fear seemed a bit relieved when Benafel (and not Williams) sat down across from him. "Well at least there's that." Fear then took a deep breath, exhaled "Starting off with a bang ..." and they were off.

Benafel had to mulligan before his first game against Fear and his second draw wasn't much better so Fear took a 1-0 lead. Next door Dave Williams pulled off Firecat Blitz for 5 plus Rites of Initiation to take game 1 from Stokinger and even the overall score. The early games were remarkably quiet, but during sideboarding Benafel started jawing with Fear and he kept his patter up though game 2. Whereas many players (especially Benafel) try to use conversation to distract their opponents, Fear seems to like to talk just for the sheer pleasure of it. He'll gladly throw himself off of his own game for the sake of a good one-liner. He summed up his take on this matchup with "A lot of pots and kettles here, gentlemen ... a lot of pots and kettles."

Hood Rich split their sealed decks up into a black-red deck, a blue-green deck with a splash of red, and a blue-white deck. Evil Inc. opted to split white instead of blue and also declined to pair blue with green the way most teams seemed to. Instead they brought black-green, red-white, and blue-white to the table.

The matchup between Chapin's blue-white deck and Sorino's black-green went long. Chapin took some early damage while he used Cephalid Looter to set up his position. He seemed to finally have the board stabilized when Second Thoughts dispatched Sorino's large Childhood Horror, but Sorino had one more trick up his sleeve: with Chapin tapped out he dropped Caustic Tar onto a land and used Krosan Restorer to untap it and take away the last of Chapin's life.

Stokinger used Sphere of Law to slow down Williams in game 2. Eventually, Williams went for the kill the same way as in game 1: Firecat Blitz (for 8) and Rites of Initiation (for his entire hand and like a million damage). This time, Stokinger had the answer: Prismatic Strands. Ouch. Without any mountains or cards in hand, Williams couldn't recover and they were soon on to game 3. 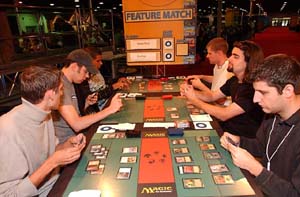 Meanwhile Fear was plinking away at Chris Benafel trying to set himself up for a game-winning Demoralize. Benafel was able to burn away most of Fear's creatures and Fear was reluctantly forced to start using his own burn on Benafel's creatures rather than Benafel's head. The game all came down to a situation where Fear was going to take a hit down to 1, but then crack back for the game and match win (thanks to Demoralize) on his next turn. However, Benafel top-decked a Flame Burst and instead they were on to game 3 as well.

Chapin once again took a bunch of damage while setting up a good board position in game 2 against Sorino, but this time there was no Caustic Tar at the end of the game and all three matchups went to game 3.

Caustic Tardid come up in game 3 for Sorino. So did Krosan Restoreragain and Evil Inc. put the first match win up on the scoreboard.

The big boys came out to play in the Williams-Stokinger match. Williams seemed to have the upper hand thanks to Kamahl, Pit Fighter. It was attacking alongside Ember Beast and Soul Scourge, but then Stokinger swept the board with Kirtar's Wrath. After the Wrath Stokinger drew almost his entire library thanks to Concentrate and Cephalid Scout. He almost ran out of time, but he did eventually draw the fliers he needed to win the game on the last extra turn and clinch the match for Evil Inc. 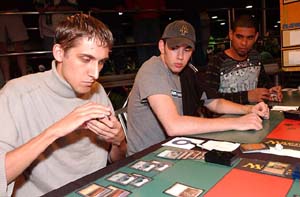 Benafel spent the entire third game sniping about time with Fear despite the fact that it was Benafel who had taken up a vast majority of the time during games 1 and 2. Not only was Fear on the "right" side of that argument, but he further risked his "evil" reputation when he pointed out a rules error that worked against his own team. The truth seems to be that Fear just genuinely enjoys playing Magic, especially when other people are watching and listening to him. If people enjoy thinking of him as a "bad guy," he's fine with that, and he'll play it up, especially if it'll get him more feature matches. Many players swear by Ed's heart, pointing to the time where he conceded a match in extra turns because his opponent would have won if only they'd had time to play the match to its natural conclusions, or the time where Ed dropped out of Worlds (despite being in contention to win a little money) just so he could cheer on his buddy (and stakehorse) Ken Krouner. The cynical out there may wonder aloud whether Ed limits his nice actions to times when it doesn't matter, but even the most cynical can't question the fact that the guy has so much fun playing that he's also fun to watch.

In the end, Benafel had just enough damage on the final extra turn to take his game and match from Fear, but Hood Rich dropped the overall match to Evil Inc 2 matches to 1.