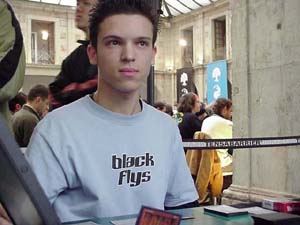 A Mogg Fanatic came out while Hugo built up his mana before feeling confident enough to drop a Quirion Dryad. With deck types now obvious Diaz took the time to ponder his options. Diaz's two Fanatics took out the Dryad as soon as Silva tried to pump it. This seemed to knock the wind out of both players and we entered quite a long Draw-Go period until Diaz tried to play a Ball Lightning. The Portuguese shook his head and Forced it.

With his graveyard now very fat Hugo played a 44 Werebear. The Spanish used an Incinerate and Seal of Fire to knock it down keeping only a Price of Progress in his hand. With his opponent at a high life total, and few lands, things looked grim for the Spanish.

Perhaps sensing this Hugo played a Dryad and pumped it with a Brainstorm (losing the last cards in hand in the process to stop eight point of damage from a Price of Progress. At this point the game stopped for more important affairs as the two bottles of champagne arrived. Sadly the reporter was very unfairly neglected in this arrangement.

A Pup tried to trade hits with the growing Dryad but Silva was quickly making up for lost time. A Bouncer came in further locking the table, especially after a Swords got rid of a Jackal Pup.

Diaz found a much better blocker in the shape of a River Boa. That might have been enough to hold back the Dryad if Hugo Silva hadn't been holding an extra Swords to Plowshares. The snake went farming and they both reached for their sideboards.

Again Diaz had no initial steam (at least like a Sligh should have) and the best he could do was a second turn Land Grant. Hugo, on the other hand, came out with the perfect second game start: Chill. Juan used a Wasteland and, a Brainstorm later, Hugo knew he was in trouble. Despite having a great hand, including a second Chill, he had no second land to play.

By the time he found the second land (courtesy of a second Brainstorm) he was facing a River Boa and had to Force another one in the process. The Chill seemed ironic, as Diaz played green card after green card. The next one was a Call of the Herd.

Silva went Gushing for answers and played a second Chill, but Diaz took the chance to blow up the first one with Emerald Charm. Still the Green monsters pounded on and Hugo Forced the flashback Call to stay alive. His hand was explosive but he only had blue mana.

Like any self-respecting Sligh player Juan Carlos Diaz didn't give him any time to breath. Two turns later the Portuguese was forced to pick his card and reach for his sideboard. He needed a way to stop the Green monsters.

This time the Pup showed up right away but was as quickly matched by a Wild Mongrel. The Spanish used a Land Grant - revealing two Calls, Boa, Incinerate and a Fanatic - to get a Taiga and seemed a bit surprised when Silva let the green dog die under the Incinerate. 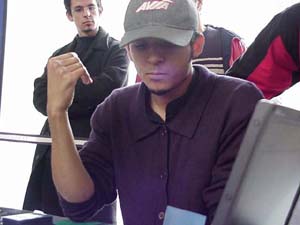 The move looked especially strange since the Portuguese had just Gushed and was forced to discard on the next turn. The Pup attacked again before Silva played a second Mongrel. If the Pup couldn't attack Diaz had another creature to mess up the math: River Boa.

He attacked with the Pup and Fanatic and Silva blocked the Pup pumping the Mongrel once. With time quickly running out neither player seemed to keen on speeding up their pace. The Boa got Submerged but Diaz replaced it with a Call token.

The Mongrel attacked again and the token blocked it before the Seal of Fire totally took it out. Time finished and despite the five extra turns the game ended in a draw, thanks to two timely Swords on Call tokens.