Round 1: Jace to the Face 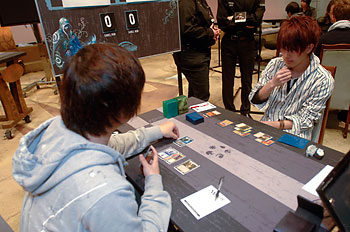 Koutarou Ootsuka and Kenji Tsumura: both former Worlds Top 8ers, both in their homeland, both playing Swans.

A Japanese Pro Tour just wouldn’t be the Pro Tour without its prodigal son Kenji Tsumura. The former Player of the Year had a slow 2008 season. That is, he had a slow 2008 season until his Top 8 at the World Championships in Memphis. A return to being a full-time student had seen him forced to spend less time on Magic, but hopes were high on the floor that the game would see him back in old form on the weekend.

His opponent in the first round, Koutaru Ootsuka, was no stranger to feature matches, either. He had managed a Worlds Top 8 of his own a year prior in New York, 2007.

The countrymen opened on the exact same plays over the course of the early turns, each leading on Mutavault followed by Reflecting Pool. A mulligan came back to bite Ootsuka as he missed his third land drop but, finding it the following turn, he made Jace Beleren and drew an extra card.

Tsumura made short work of the planeswalker by using his Mutavault to take it down, and with a second copy of the creature-land on the offensive, he had managed to drop Ootsuka to 12 over the course of the early turns. Koutarou tried to stabilize with a surprise Plumeveil mid-combat to block an attack from Kenji’s Mutavault, and the diminutive superstar considered his options. Ultimately he opted to allow his 2/2 to die, then finished off the monstrous blocker with a Volcanic Fallout.

A second Jace Beleren hit the field of play for Koutarou, and in an effort to keep the card drawing engine alive, he raised the loyalty count by 2 and had both players draw a card. That meant when Kenji crashed into it with Ghitu Encampment and Mutavault, the planeswalker survived. Koutarou used the final loyalty counter on his following to turn to draw yet another extra card, then played a third copy of the rare to give both himself and his opponent even more free cards. The matchup was starting to bog down as the two control players surveyed each other from across the table. Could Koutarou Ootsuka’s Swans deck withstand the efforts of Kenji Tsumura’s in the first-round mirror match?

For the third time in the game, Jace Beleren was sent to the graveyard during the combat phase, though not until Koutarou had dispatched Kenji’s sole remaining Mutavault with a sacrificial block from his own copy of the 2/2 land. With Kenji tapped out from using Incinerate to kill the Jace as well as attacking it with Ghitu Encampment and the now-dead Mutavault, Koutarou snuck a Seismic Assault onto the board, then a Plumeveil the following turn.

Despite the fact his opponent had missed early land drops, the game was looking to be slipping out of Kenji Tsumura’s control. The extra draws from the flurry of Jaces early in the game had caught Ootsuka right back up, and Kenji smiled a tad as his opponent played the fourth copy of the card with four mana up to fight a counter battle. Tsumura came out on top and, with his opponent tapped out, had the chance to capitalize. The crowd craned their necks to see what his big play would be. His answer? Simply passing the turn.

The two played draw-go for a while, trying to hit land drops to have a mana advantage during the final counter battle. Tsumura plopped a Plumeveil of his own into play, but the only creatures on the board had defender so it looked to be practically irrelevant. After more turns of the game of chicken, Kenji finally broke parity, attempting his own copy of Seismic Assault. Koutarou attempted to counter with Cryptic Command, and Kenji fired back with Negate. That met a Negate from Ootsuka and sent Tsumura into the tank. Ultimately, he opted to let his Assault be countered, then played Tidings. When Koutarou revealed a second Negate to counter that, Kenji pulled the trigger on his final counter, Broken Ambitions, to force his sorcery through and refill his hand.

It had been a massive turn, but Koutarou had the initiative against a once-again tapped out Kenji Tsumura. He surveyed the board, calculating a game plan. His play? A Tidings of his own, leaving both players with refurbished hands. A lot of spells had been played over two turns, but the Japanese stars were right back to where they had been before the action: no changes on the board, and full grips. Tsumura used a Cryptic Comand to bounce Ootsuka’s Seismic Assault, and won the counter battle over doing so. He then played a Jace Beleren of his own, the fifth copy of the card to see play in the game, and added a Seismic Assault to match Koutarou’s. Ootsuka used his opponent’s end of turn step to Incinerate the Jace. 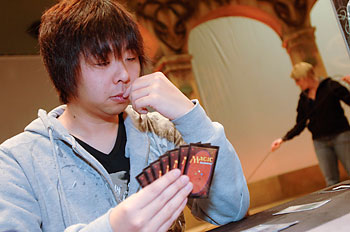 Koutarou has a fistful of options.

When Koutarou tried to re-play his bounced Seismic Assault, Tsumura was ready with Negate. A second copy of the enchantment resolved successfullyfor Ootsuka, however. All around them, other matches in the Arena were finishing up, but the two Japanese players were mired in a grueling monster of a first game. Tsumura took his turn to refill his hand yet again, on the back of a Tidings and his second Jace (Jace Beleren count to that point in the match: 6). He opted not to force through a Swans of Bryn Argoll, however, as Koutarou used Broken Ambitions for two to counter. With sufficient mana to pay, Kenji had simply opted not to. The wily pro was surely up to something, but what was it?

Tsumura tried for a second Swans on his following turn, and Koutarou allowed it to hit play. Ootsuka than chucked a land at the 4/3 with his Seismic Assault, drawing two cards in the process. He followed that up with a second land, again drawing two cards, and followed that with a third land. It looked like Kenji Tsumura was about to lose the grinder to his own creature! The players began examining graveyards to determine how many lands each had remaining in his deck. Coming up with a number he was apparently happy with, Koutarou pitched his fourth, then fifth lands at the Swans. With Kenji at 16 life and with eight lands on the board on top of the over half dozen he had in the graveyard, it would be a tall order for Koutarou to find enough of the resources left in his deck to actually kill Kenji with them.

As if on cue, Koutarou stopped throwing lands and spit an Incinerate at his opponent’s 4/3 flyer. Kenji used a Cryptic Command to counter, and Koutarou fired back with Broken Ambitions for 1. Unfortunately for him, Tsumura had access to plenty of mana and was able to pay. However, Koutarou won the clash and, with both players down to about a dozen cards total in their libraries and each trying to draw a critical mass of lands to finish the other off with Seismic Assault, the counter could prove to be fatal for Kenji. When he started revealing lands from his hand, however, sending them at Koutarou’s head instead of his own Swans, the writing on the wall was all but etched. It took four of the cards hitting the graveyard to end the half-hour-plus game in Kenji’s favor, dealing the final 8 points of damage.

Both players hustled to get in a second game with only ten minutes remaining in the round. Koutarou Ootsuka’s third turn saw Goblin Assault hit play for him, while Kenji Tsumura made Jace Beleren (the seventh of the match) and had both players draw a card. Koutarou decided to send all of his Goblin tokens towards Jace Beleren, and Kenji tried to mount a defense with Plumeveil. Ootsuka was ready, using Cryptic Command to counter the 4/4 “wall” and bouncing one of his opponent’s lands to set Kenji back on tempo. 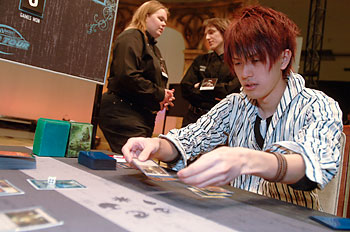 Kenji is here for (reportedly) his final tournament for the foreseeable future.

Unfortunately for Koutarou, that left him tapped out, and Tsumura managed to sneak a Seismic Assault onto the board. He also upped Jace’s loyalty to three, having both players draw a card for the second time in the game. When his opponent sent three Goblins at the planeswalker during the next combat step, Kenji discarded two lands to his Seismic Assault to stymie the attack. Jace survived the turn with two loyalty counters.

With a tremendous amount of effort, Koutarou Ootsuka finally managed to rid the board of his opponent’s Jace Beleren after his next attack. Unfortunately for him, he did so with only two mana left untapped, not enough to stop Kenji from playing a second copy of the card (Jace count: 8) with Negate backup. The match was winding down and, with hardly any time left, it looked like an impossibility for Koutarou Ootsuka to even the match at one game a piece. He needed a miracle.

Not quite a miraculous super-play, what Koutarou did have was a Jace Beleren to nuke his opponent’s copy of the planeswalker along with his own (Jace count: 9). Kenji made Cryptic Command choosing to counter the Jace and bounce his opponent’s Goblin Assault. That left Koutarou with two Goblin tokens as head judge Riccardo Tessitori called time in the round. The players would get five additional turns and with the score at 18–18, circumstances were becoming increasingly dire for Koutarou Ootsuka.

On the second turn of five, Koutarou made a surprise play by casting an Incendiary Command. Kenji was ready with Negate, but Ootsuka did manage to sneak yet another Jace Beleren on the board to kill his opponent’s (Jace count: 10). Still, at the end of the fifth turn, Koutarou was miles from winning and extended his hand in defeat.