One started with an intra-country grudge match between two of the Japanese teams here today. On one side is team I's, whom we're told is the same title of a particularly violent Japanese manga. Opposing them is team Vanilla Ice, lovingly named after one of the great musical geniuses of our time.

Game 1's started out poorly for the I's, with Masahiko and Katsuhiro each being forced into to a double mulligan. In the A seat, Akira started off color-centric, leading with Hallowed Fountain and an Overgrown Tomb into an Orzhov Signet. Masahiko was also playing a four-color deck, but in his case was short the blue and white. Akira cast Castigate to rip away Masahiko's Civic Wayfinder, then followed up with a Loxodon Hierarch. Masahiko was stuck with a hand of Simic Sky Swallower, Skeletal Vampire, and Angels of Despair. Missing lands and colors, Masahiko quickly conceded. 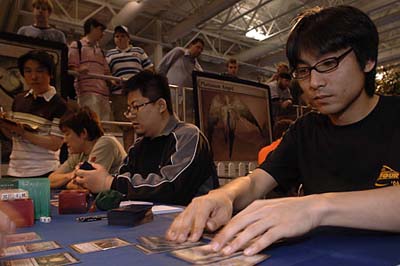 Meanwhile, the C match had a blazing game of its own, Tsuyoshi exploiting Katsuhiro's double mulligan with a Dark Confidant and Skyknight Legionnaire. Katsuhiro tried to fight back with a Dark Confidant of his own, but that just put him that much closer to burn range. A sequence of Char-Char from Tsuyoshi had Vanilla Ice up two games to zero.

In the B seat, two of the more famous Japanese players squared off, in this case with control decks. Unlike the games around them, these captains started out with the full seven cards and mana to spare. Each move was carefully calculated, much to the admiration of the observers on the catwalk. Jin's red-black-blue deck made the first non-Signet move with Fall, of the Rise//Fall variety. Kenji randomly showed a Simic Signet and a Simic Growth Chamber, grateful the Fall didn't hit anything more imposing. Jin tried a second Fall, but that one was Remanded.

With Jin tapped out, Kenji was free to cast a big Invoke the Firemind for five cards, putting him out of risk of further discard shenanigans. Jin decided to change tack and cast Clutch of the Undercity on a bounce land, but that just gave Kenji the opportunity to cast a Simic Sky Swallower. With three Signets in play, Kenji's SSS looked Hit-proof, and indeed, the engineered beat stick took the first game.

By the time the Simic Sky Swallower had taken off the final points, match C had finished with Tsuyoshi as the winner. Katsuhiro got all his colors together this game, playing a Dark Confidant and Plaxcaster Frogling. Tsuyoshi cast a Lyzolda, the Blood Witch, traded it with the Frogling, and shot Katsuhiro for two, indicating he had no fear of Katsuhiro's Dark Confidant. The reasoning behind that became evident, when Tsuyoshi cast his two Chars, followed by a Giant Solifuge. Those cards combined with the life loss from Bob gave the game and match to Tsuyoshi

In the A seats, Akira mimicked his Game 1 start with a Castigate, removing a Civic Wayfinder. Unfortunately for Akira, this time Masahiko had a second Wayfinder, allowing him a board presence as well as an enabler to get his expensive spells online. At the five-mana mark, Masahiko was able to toss out Moonlight Bargain. The I's player decided eight life for four cards was fair, while Akira could only look on in as his opponent buried him in card advantage.

Masahiko followed up his big card draw with a Castigate to remove Crime//Punishment, and a potentially backbreaking Grand Arbiter Augustin IV. Under the taxing effect of the Grand Arbiter, Akira could only pass the turn back and watch one of his bounce lands get eaten by an Angel of Despair. Locked out, Akira gave up Game 2. 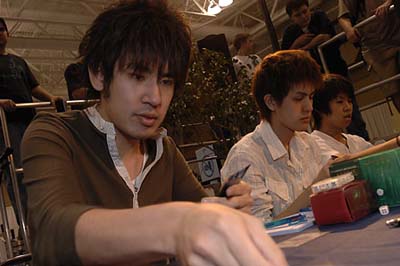 Masahiko, Kenji, and Katsuhiro had a hole to dig out of.

In the third game, Akira appeared to have the advantage. His turn-two Castigate allowed him to see Masahiko had kept a very high casting-costed draw. Simic Sky Swallower, Angel of Despair, Debtors' Knell, and a Civic Wayfinder were available for removal. Akira of course took the Wayfinder, hoping to once again win while Masahiko was stuck on too few lands.

Unfortunately for Akira, Masahiko drew two Castigates in a row, to remove Akira's only non-land cards. Akira was severely mana flooded at this point, giving him no way to exploit Masahiko's brief mana issues. Under no pressure, Masahiko reached seven mana and laid out an Angel of Despair. There was nothing to destroy but one of Akira's superfluous lands, but a 5/5 flier seemed quite relevant on the empty battlefield. Masahiko followed up with a pair of Skeletal Vampires and Akira had to throw in the towel

With the teams tied at one match apiece, the question of the round win was to be decided by the captains in seat B, Jin and Kenji. In Game 2, Kenji kept a one-land, multiple-Signet draw. His gamble didn't pay off when he was forced to discard a Simic Sky Swallower and Research//Development. When Kenji did hit the two mana mark, both of his Signets were removed with Hit. Jin cast his first creature in Giant Solifuge, but the Insect was quickly Remanded back to the hand.

Kenji began to slowly to build his mana base, while Jin was sneaking in damage whenever possible with Char and Clutch of the Undercity. Jin's second attempt at Solifuge was Voidslimed, but a flash of Demonfire to his teammates indicated his plan to just empty his hand to Hellbent for the win. That plan turned out to be unnecessary, as Fall protected Jin's Niv-Mizzet, the Firemind. With no removal spells in hand, Kenji scooped to the Izzet parun.

For the final game of the round, Kenji started off on the play with a mulligan. Jin looked bemused by his initial seven but decided to keep. Both players started off their early turns with Signets and/or bounce lands. Jin made the first move with a Consult the Necrosages, forcing Kenji to pitch a land and Signet. Jin tried a second Mind Rot, but it was met with Muddle the Mixture. Kenji hit the five mana mark and passed, but in response to a Fall from Jin, cast Development, with a single card remaining in hand.

Jin and his teammates spent a good amount of deciding on the correct split of this modern Fact or Fiction. In the end they gave Kenji two 3/1s and one card, which got pitched to a resolved Fall. Kenji was out of gas at this point but hoped his two elementals would be enough to win the game.

Unfortunately for Kenji, both creatures were knocked off with double Demonfires. With only a land in hand and no creatures in play, Kenji was forced to allow Jin full access to his life total. Jin's Giant Solifuge kicked things off, with a Hit cast solely for the shock value. Kenji looked visibly frustrated with his draws of land, signet, land. Unfettered, Jin's Solifuge and burn spells quickly ended the game and match, winning the round for his team. Round 1, the I's didn't have it.