here was not a lot of action before the match beyond Komuro being the last person to the table. Akira Asahara and Shu Komuro have a Pro Tour win and a Top 8 at Worlds between them. Tomohiro Kaji and Tomoharu Saito won Pro Tour-Charleston as part of team Kajiharu80 with Shouta Yasooka, The players wasted no time in double-checking their decks to make sure they had the appropriate forty and began shuffling. Saito hadn't even presented before suffering one of his trademark self-inflicted concentration-inducing slaps to the face, but the play seemed to work as his team won the die roll and elected to play. 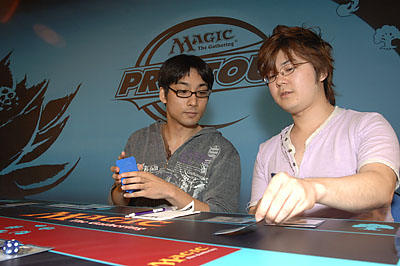 Saito takes the first mulligan, though the pain is lessened by the fact they're playing 2HG and he will get to refill his hand back up to seven. Satisfied, he keeps the new seven and it's Asahara's turn to mull. Copying Saito's play, he opts to keep the new seven as well.

Saito opens with Plains, suspend Shade of Trokair while Kaji has Island. Asahara and Komuro open with Forest and Swamp, respectively, before shipping, but by the time it's their turn again, the board has become cluttered on the other side of the table with an Errant Doomsayers and a suspended Errant Ephemeron joining the Shade of Trokair waiting to enter play. They answer with Thornweald Archer but Saito has a Midnight Charm to trump. Feeling fair is fair, Komuro uses a Midnight Charm of his own on the Doomsayers during Saito's turn, only to have to read what Mistmeadow Skulk does as Tomoharu plays the über-blocker post-combat.

Asahara hits a Plains for the white splash in his deck and Komuro, who has both his blue and black available, plays Trespasser il-Vec. On the other side of the board, Kaji is representing

while his teammate is looking to be a black-white mage.

Shade of Trokair ends its time on suspend and attacks with Skulk, bringing Asahara/Komuro down to 28. Kaji suspends an Infiltrator il-Kor to join his Ephemeron still waiting to enter play, and there's so much suspense going on the feature match is actually starting to feel like a Wes Craven flick.

Asahara plays Pallid Mycoderm, which merits some consideration of a response from Kaji/Saito. Eventually they agree to Cradle to Grave the 2/4, and Asahara and Komuro ship the turn. Kaji has Volcano Hellion in his hand, supplementing three lands, but they can't determine whether or not they want to play it right away to kill the Trespasser il-Vec threatening to trade with their freshly unsuspended Infiltrator il-Kor. Eventually they decide to play the Hellion, which merits a card reading from both Komuro and the table judge. Asahara and Komuro ponder a response, with Asahara repeatedly pointing at one of two Erratic Mutations in Komuro's hand, but eventually the Hellion for 23 nabs the Trespasser. That play drastically changes the life totals putting Kaji/Saito at 10. They attack with Shade of Trokair, Infiltrator il-Vec, and the Mistmeadow Skulk. The Shade gets a single pump and Shu pounces on the Infiltrator with Erratic Mutation, leaving him and his teammate at 24 after the attack. Asahara adds Spectral Force to the board, but that taps him out and Shu has no play of his own, forcing them to pass back. 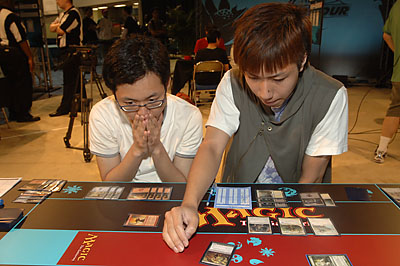 On upkeep, Kaji mulls his ability to pay for the Hellion as a result of the 2HG life total rules. The Hellion considers only Kaji's life total, which is computed as half of the team's total, leaving him able to afford the five mana to keep the Hellion in play if he chooses to. His second Infiltrator and Errant Ephemeron are also threatening to enter play and Asahara and Komuro find themselves looking at a very unfavorable board position. Deciding to do something about it, Komuro Logic Knots the 4/4 flyer for five, forcing Kaji to choose between paying for echo or the fancy Power Sink. He opts to keep the Hellion, and Infiltrator, Skulk, and a Dauthi Slayer attack into a board of just Spectral Force for Komuro and Asahara.

Shu and Akira draw for the turn but find little help. Asahara's Sprout Swarm, Gaea's Anthem, Forest, and Poultice Sliver will do nothing to stop an attack force more evasive than a corrupt politician at a press junket, and Shu isn't looking much better with an Erratic Mutation, Treacherous Urge, Tolarian Sentinel, and Gorgon Recluse.

Asahara plays the Anthem, making his Spectral Force into a 9/9 trampler which, thanks to the Dauthi Slayer Saito played on the previous turn, gets to untap normally, then attacks with the monster. Tomoharu and Tomohiro block the Force with all of their creatures that have no form of evasion including Hellion, Pallid Mycoderm, and a Shade of Trokair.

Shu and Asahara consider their plays. Whitemane Lion would allow them to trade the tempo of replaying the Force with killing most of Kaji/Saito's team, while Erratic Mutation would let them to keep Force on the board but not play any threats from Komuro. They opt for the Whitemane, leaving Shade of Trokair on the board for Kaji. Post-combat Shu Erratic Mutations the Infiltrator, disappointedly revealing his Stronghold Overseer.

He then ships the turn, but Kaji and Saito don't immediately untap. Instead, Saito expresses concern over the placement of sleeves in Shu's deck. After a few moments of discussion (in Japanese), the table judge is asked to straighten the deck and check the position for any problems. With none resulting, Kaji and Saito finally untap.

They draw, then attack for four with Slayer and Shade of Trokair. Asahara opts not to block with his 3/3 Whitemane, and they pump Shade once, dealing 4 and leaving the totals at 14 to 11, with Saito/Kaji having gained a single life point from the lifelink on the Skulk which attacked the previous turn. A second Errant Doomsayers replaces the one which had been Midnight Charmed for Saito and Kaji adds Skirk Shaman.

Asahara draws an Island and plays it before re-playing the Spectral Force. He then discusses with his teammate whether or not they should attack with the Whitemane Lion. After a minute of consideration, they bash in, which merits a re-centering from Saito with a resounding slap! Doomsayers chump the Lion, and Shu plays his Gorgon Recluse before passing.

Kaji rips a land for his turn, showing a bit of mana flood after having only seen five nonland cards throughout the course of the game. If his team's evasive creatures hold up, however, it may not matter. Skirk Shaman and Dauthi Slayer drop Shu and Akira to 10, then, after considering any additional plays, Kaji and Saito pass the turn.

Shu manages to draw a Wistful Thinking, which he uses on Kaji (who has to verify what the card does). He draws Riftwing Cloudskate and another land, which would provide an answer temporarily to the 9/9 Spectral Force, but unfortunately he only has four cards in hand and has to discard all of them, including the flyer. Meanwhile Komuro and Asahara are already discussing how they'll attack, reading and re-reading Mistmeadow Skulk before deciding to send with Gorgon Recluse and Spectral Force. 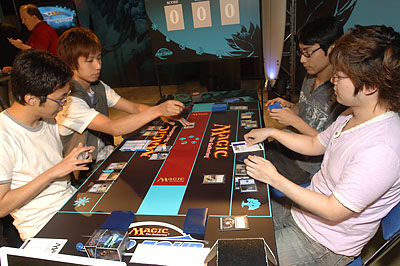 A Two-Headed Giant game unfolds like a war council.

Saito lets the Spectral Force trigger and then bounces his Dauthi Slayer, the only black creature on their board, with the gating trigger on Stonecloaker. Mistmeadow Skulk steps in front of Recluse, though both Kaji and Saito need to verify whether or not the Skulk will die from the trigger created from being a non-black creature blocking or blocked by the Recluse. Not sure they want to lose the Skulk, whose lifelink ability in such a close race may actually be relevant, they switch blocks, putting Shade in front of the Recluse and the Skulk in front of the Force. Shade dies, and they take 8 from the Force before gaining 1 from the Skulk. Post-combat Asahara adds a Poultice Sliver to the board.

Kaji and Saito bash for 5 on their turn with the Skirk Shaman and Stonecloaker leaving the totals at 9-5 in their favor. Post-combat they go all out in an effort to win the following turn (and not die during Komuro and Asahara's turn) with Magus of the Scroll, Dauthi Slayer, and Saltfield Recluse. It's all a bluff, however, and when Komuro and Asahara remember to attack with all of their creatures, Kaji and Saito are forced to pack it in.

Losing the first match of a Pro Tour is never easy, and Kaji and Saito lingered at the table well after their compatriots had left, discussing what minute plays they could have made differently to change the outcome of such a close match. Ultimately, it seems, they walked away dissatisfied with the outcome-though perhaps less so than if they had lost to complete strangers-and already preparing for the next round.