The match started quietly with both players mostly quiet as they shuffled for the match. Their draft table was easily the strongest table of the tournament, also including Gary Krakower and Michael Gurney. Despite the stiff competition at their table, both seemed pleased with their decks. Both players were playing traditional color combinations - Elarar was playing a Green/Red/Black deck, while Tsang's Green/White/Blue deck was similarly typical. Both players have a strong history of good play, with Tsang a long-time Pro Tour regular and Elarar recently making a much more recent splash on the Masters circuit and at the most recent Pro Tour Chicago with a Top 8 finish.

Tsang mulliganed the first game, but was the first to open play with an Urborg Elf and a Samite Pilgrim, while Elarar kept his side of the board without a clear opening creature. An early attempt to Scorching Lava the Pilgrim while summoning sick was thwarted with an Explosive Growth. As Elarar continued to only lay land (looking forlornly at the Magma Burst in his hand), Tsang dropped a Captain Sisay and used it in the next turn to search for and cast a fifth turn Treva. Elarar's hand was not something to be sad about, and as he developed his table, with reasonable plays such as Kavu Climber, and Ebony Treefolk, Tsang continued his barrage with an Armadillo Cloak on the Treva, prompting a set of curses from Elarar.

Elarar tried to mount a new offense with a Skizzik and a Sinister Strength for his Ebony Treefolk, but it didn't really matter. Unable to race a Cloaked Dragon, he died quickly. 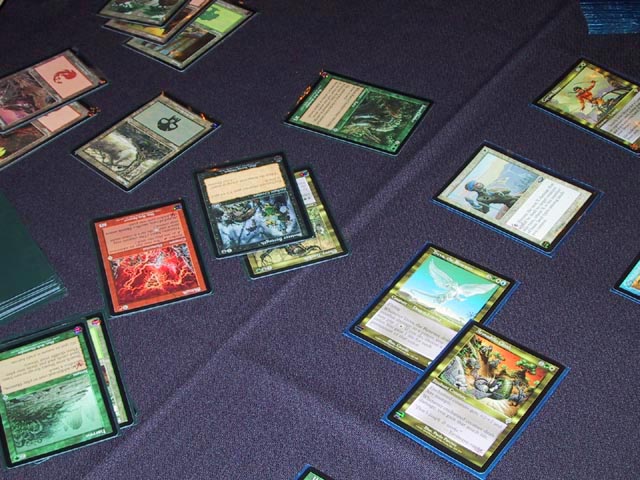 Elarar took the mulligan in this game, holding a double Harrow draw, but with only a single land. Tsang's draw included a nice mix of mana, and a pair of game-defining Samite Pilgrims. In the initial turns, Tsang dropped his Pilgrims, and Elarar once again was stuck with a nearly useless Magma Burst. A quick Addle took out the offensive Treva from Tsang's hand, but Tsang pushed out a Charging Troll and Coastal Drake, while Elarar looked at a hand full of land and a single spell, the nearly useless Magma Burst.

Drawing land after land, Elarar's prospects dwindled away to almost nothing when he failed to produce any spells. Drawing ten lands and only two spells, Elarar conceded when he failed to draw a spell. Shaking hands on the match, they went to grab coffee to prepare for their next match.