Round 1: Jin Okamoto vs. Jens Thoren

While both players brought their game face, neither brought a die. After a brief examination of the audience, a ten-sided die was produced. Jin won the crucial roll and chose to go first. 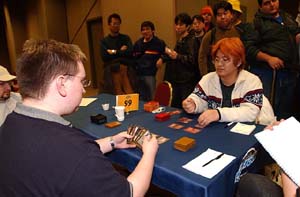 Both players counted out seven cards, but Jens left his sitting on the table while Jin decided whether or not to mulligan (he did not). Thoren then examined his own hand, and decided to cash in his seven for a hand of triple Swamp, Tainted Pact, Smother, and Skeletal Scrying.

The game swimmingly well for Okamoto, who led with two straight sac lands (thinning his deck significantly), Raging Goblin, Goblin Taskmaster, and Firebolt all by the end of the second turn. Although Jens smothered a pump Rager on the third turn, he could draw nothing but land after land. Even his Tainted Pact betrayed him—it gave him Duress, which swung and whiffed into Jin's hand of double Barbarian Ring and Blistering Firecat.

Speaking of said Firecat, it smashed across the board the following turn, crushing Jens life total to a mere seven on turn four. Thoren top decked Mutilate to clear out the remaining goblin, but Okamoto reestablished his board quickly with Sparksmith and Goblin Taskmaster. When the European attempted to Corrupt the Taskmaster on the following turn, the Japanese player was ready with Lava Dart to kill his own creature, fizzling the Corrupt, without enough life to survive the next turn between Firebolt, Lava Dart, and now multiple Barbarian Rings, Jens conceded the game.

Many players would say that stoicism and emotionless expressions are the hallmark traits of Jens Thoren. With this being said, that he was chewing gum during this match would be a cause for reporting here on the sideboard.

On the other side of the world, Jin kept a land-light hand as well, and ended up stuck at only two Mountains. This stifled his offensive potential, as his first goblin (a Sledder) died to the Blood, and his next three plays were Raging Goblin, Goblin Sledder and Goblin Taskmaster—on consecutive turns.

Jens couldn't draw a fourth land to save his life, so he cycled his Gladiators to move through his deck. After drawing twin Engineered Plagues, he finally got that third Swamp that allowed him to clear the board of goblins. He followed this up with his second enchantment, naming Cats this time.

Not to be deterred, Jin started throwing some hurting straight to the noggin. Twin Volcanic Hammers and a Lava Dart brought Jens to a precarious seven life total, and a pair of Barbarian Rings loomed on the board. Jens untapped, and drew Mutilate, buying himself five more life points.

Jin sighed at this turn of events, drew, and passed his turn. Jens spent his turn recurring and cycling Gladiators, his hand full of Edicts, Smothers and Mutilates. At the end of turn, Jin sent Flaming Gambit for four across the board, and looked set to win the game with a graveyard of Gambit and a board of double Barbarian Ring. Just when it looked to be over, Thoren ripped Haunting Echoes off the top of his deck! Jin sighed again, grinned, and paused to consider his plays. In the end, he flashed back Flaming Gambit for three, flashed back his Dart (bringing Jens down to four), and flashed back his deck for Jens to peruse.

Thoren skimmed through the deck, removing all copies of Volcanic Hammer. He left the remaining goblins in his opponent's deck (since they were useless under Engineered Plague), and passed the turn.

Fate smiled on Japan's favored son, as Jin untapped, drew a fifth land, and cast Firebolt at Jens. With five lands and a Firebolt available the following turn, he looked a shoo-in to win. Jens brought back one of his Gladiators and drew Tainted Pact. He cast the Impulse-a-like, revealing:

With no way to stop the incoming damage, Jens extended his hand to the victorious Jin Okamoto.