Hassaku is best known as the co-designer of the Draco-Explosion deck that turned heads at Pro Tour Houston for its wackiness, but what was even more shocking was the fact that the deck actually won more matches than anyone had anticipated, bringing him a 24h place finish. His opponent is Masahiko Morita, one of Japan’s top players. He recently won a Team Masters with PS2, which was a refreshing change from his string of near-misses. Get this: four Grand Prix events, four finals appearances. Luckily he broke that finals losing streak in Venice where he won the Masters. Without a doubt, Morita is looking to have that momentum carry him through this weekend to a spot on the Japanese team. Morita is running Reanimator, while Hassaku is playing red/green. 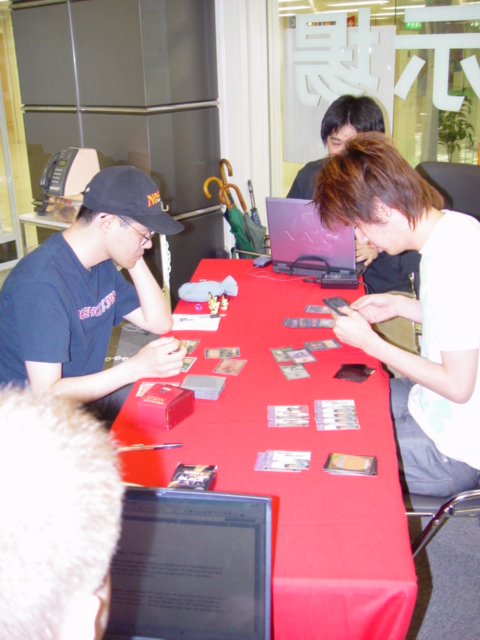 Hassaku mulliganed his opening hand, and started off with Birds of Paradise, which was followed on turn two by Wild Mongrel and Grim Lavamancer. Morita cast Entomb on end step, getting Undead Gladiator. On his turn, Smother killed off Wild Mongrel, and Hassaku played another. Volcanic Hammer was sent to the dome, leaving Hassaku with no cards in hand, and a Mongrel and Lavamancer in play. Morita wasn’t under an incredible amount of pressure, and used Buried Alive to put Phantom Nishoba, Visara the Dreadful and Anger into his graveyard. Stitch Together on the following turn put the Nishoba right into play and swinging, and Hassaku already had a look on his face that admitted defeat. Doomed Necromancer did its thing with haste a turn later to bring back Visara, and the game was over.

This time, it was Morita who mulliganed. Hassaku had a first turn Birds, and Morita played Duress, taking away Firebolt. The rest of Hassaku’s hand was lands, Basking Rootwalla and Grim Lavamancer. Both of the one-mana creatures came out, and Morita used Burning Wish to get Zombify from his sideboard. Hassaku knew time was running out and attacked with his creatures for four damage, then sent Volcanic hammer right at Morita. Buried Alive fetched Arcanis the Omnipotent, Anger and Phantom Nishoba, and on the next turn the Nishoba was Zombified and sent right into the Red Zone. Hassaku tried his best to slow the monster down with burn spells and blocking, bringing it down to a 2/2 at the expense of major card disadvantage and a massive life swing in favor of Morita. Visara came out the old fashioned way, as Morita tapped six mana and put the Legend right into play and attacking. Burning Wish got Sickening Dreams, which finished the job.

4 Call of the Herd 3 Elephant Guide

1 Visara the Dreadful 1 Arcanis the Omnipotent