Round 1: John Larkin vs. Jeff Cunningham

Jeff Cunningham, father of Wild Mongrel in the Extended format, is a beatdown mage if there ever was one. His deck of choice for this event, red/green beatdown, is similar to the one he played at Canadian Nationals: Mongrels, madness, and tons of burn. 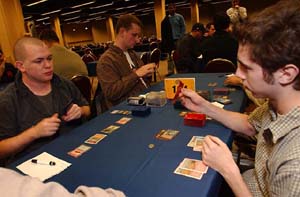 Opposite him in this, the opening round of the Standard Masters, is Ireland's top player, three-time PT Top 8'er John Larkin. Larkin is playing the Mirari's Wake combo deck that came up at the end of the Odyssey Block constructed format. The deck generates tons of mana and card advantage, eventually winning via decking with Krosan Reclamation or damage with a recurred Elephant Ambush.

Cunningham came out blazing with Mongrel, Call of the Herd, and Elephant Guide on the token in the first four turns. Larkin was holding multiple copies of Wrath of God but couldn't find another source of white mana to go with his Brushland. He had to tap out on turn 4 to cast Deep Analysis, and Cunningham took advantage of the situation by attacking him down to six (pitching some spare lands), and then hitting him with a Volcanic Hammer down to 3.

Larkin didn't find white mana, but he did get Moment's Peace. Unfortunately, Cunningham had a Grim Lavamancer that Larkin could do nothing about. Two activations later, the Canadian was up a game.

Cunningham had no early creatures in Game 2, just burn. He Firebolted and Hammered Larkin. He finally drew green mana and played a Basking Rootwalla, which was countered. His second Rootwalla stuck, however, but Larkin was setting up. He had out a Compulsion and Wished for a Chastise to deal with the Rootwalla. Cunningham couldn't get anything else on the table.

Larkin eventually dropped Mirari and Wished for Opportunity. When Cunningham realized that he probably wasn't going to have another spell resolve, he scooped up his cards.

Cunningham had to mulligan to start the deciding game, but had a nice start of Llanowar Elves, Basking Rootwalla, and Call of the Herd. Larkin took the beats and eventually Wrathed at 9 life.

Unfortunately, the Irishman was stuck on 4 mana and had to discard a Cunning Wish on his next turn. Cunningham had flash backed his Call and was content to have the 3/3 token do all the work.

Larkin was looking to stay alive with Moment's Peace, but Cunningham had Flaring Pain to stop one of them. Larkin stayed alive—barely—by cycling a Renewed Faith and Wishing for Peace (something we should all do), but Cunningham just kept on attacking.

Eventually Larkin ran out of fog effects, and was dismayed to see Cunningham put Elephant Guide on the token, effectively neutralizing the Wrath of God Larkin had planned to cast.

On the final turn, Larkin cycled a Remote Isle looking for a Chastise, but to no avail.

After the match, Cunningham said that he was torn between the red/green deck and the blue/green one that he lent Peter Szigeti for the Gateway. He was happy to have stuck with his first option, especially in a field full of Psychatog and Wake.