Round 1: John Ormerod vs. Nicolai Herzog 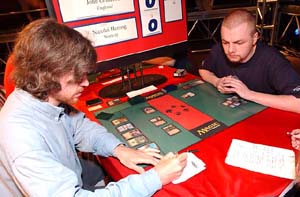 As the two players started shuffling, they joked back and forth about the cities in either country and about the draft. I asked Nicolai who he thought would win, thinking he would obviously say himself, but instead, without pause, he pointed right to John. I smiled and then turned to John to ask him the same question and he smiled like a little kid on his birthday and said that he would win.

Nicolai explained that John would clearly win because John had two Roar of the Wurms, two Wild Mongrels, multiple Crashing Centaurs, and a very strong Green-Blue deck. Nicolai went on to say that the person drafting next to him "D-Drafted" cards that should have gone directly into his own deck, which left him with a weak White-Blue-Black deck.

Nicolai won the initial die roll and opted to play first, laying out a Seafloor Debris. Ormerod cast first turn Diligent Farmhand and passes the turn. After an attack with the Farmhand, Nicolai takes his third turn and plays Last Rites, thinking for a few moments on exactly how much he would like to target Ormerod's hand for. At last he discards Clockwork Gnomes and a Swamp to choose and discard two non-land cards from Ormerod's hand. Nicolai had his spell turned on him, when the only non-land card of six in Ormerod's hand was Roar of the Wurm, which costs less to Flashback than it does to cast from the hand. 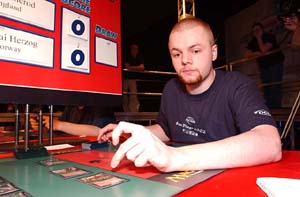 Ormerod goes on to draw and play Wild Mongrel, Flashback Roar of the Wurm, and Springing Tiger in the next few turns. As John puts all this pressure on Nicolai, he answers with a couple non-important creatures to jump in the way of the 6/6 monster.
John is still far from Threshold when he casts Seton's Desire on his Springing Tiger, but the +2/+2 effect on the card is still good on its own. When Nicolai casts Zombie Assassin, John calculates in his head, figuring that he needs to get to Threshold before the Assassin loses Summoning Sickness.

The next turn John takes, he top-decks a Rites of Spring. He has enough cards in hand (all basic land) to discard to the Rites (which he sacrifices his Seafloor Debris to cast) so that he can get himself at Threshold, triggering the Lure effect on Seton's Desire and making the Springing Tiger a huge 7/7 hulk. Needless to say, all of Nicolai's creatures were sucked into the tiger's path until Nicolai ran out of creatures to cast. The players moved on to Game 2.

Nicolai lets John play first, despite John's obviously fast deck. The first spell played in this game was John's turn two Rites of Spring for three, but then John can only watch as Nicolai plays two Patrol Hounds and an Auramancer. John gets hit a few times with the Hounds before he can play a Metamorphic Wurm to completely halt any more aggressive moves from Nicolai's creatures. 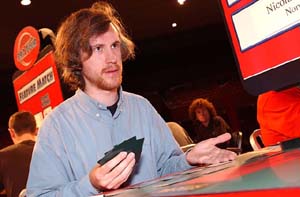 Nicolai casts Zombie Assassin, sacrificing his own Seafloor Debris to get the black mana, then he discards a card to give his Patrol Hound first strike and to have two cards in his graveyard to target John's Wurm with the Assassin. Nicolai attacks a few more times to bring John down to two life, and finally John concedes the game.

Game 3 is defined by a bunch of John's green monsters overpowering Nicolai's smaller blue and white bears. Nicolai needs some time to think through a couple of plays, and John is gracious enough to say, "Sure, we have 28 minutes left," giving Nicolai all the time he needs. In the end, there was no squeeze on time at all, and Nicolai finally figured out who he wanted to target with his Cultural Exchange.

This did not help Nicolai as much as he had hoped, and John stampeded over Nicolai to take the match win.