Round 1: Jon Finkel vs. Ben Rubin 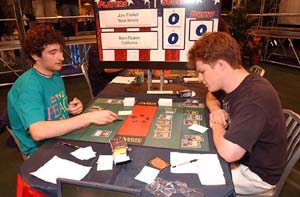 Wow! It just doesn't get any better than this match-up. Jon Finkel has won more money playing Magic than anyone else ever. The #2 money winner from the United States (and #3 overall) is Ben Rubin. Adding even more drama to their first round match is the fact that Jon Finkel does not currently possess an invitation to Worlds – a tournament he won just two years ago.

I asked Jon the questions everyone has been wanting to ask him: "Do you still care about winning?" "Did you practice?" "Are you going to Top 8 here?" He leaned back in his chair, quiet and almost whispering as he admitted "I'd like to do well ..." I pressed him a bit more and learned that he did indeed play several drafts with Judgment and had some theories about what was good in the set new. Two years ago here at US Nationals was the last time all the pros played a set in Limited on the very first weekend it was legal and Finkel went 6-0 that day, going on to win the national title. This time around, however, Day 1 is Standard. 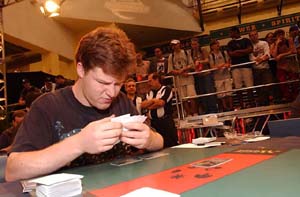 Both Finkel and Rubin ran green-blue decks, but that's about all they have in common. Rubin's was an ultra-aggressive, Madness-fueled beatdown deck while Finkel ran running a much more controllish Opposition deck. Finkel had a really nice draw – turn 2 Ice to slow you down, turn 3 Squirrel nest, turn 4 Opposition. Rubin also had his deck's version of "the good draw" – Careful Study out a Rootwalla, play a Mongrel and a Looter, fill my graveyard with a couple copies of Deep Analysis and Roar of the Wurm. He played creatures as quickly as he could and kept sneaking damage through Finkel's growing army of tappers. Finkel spent his turns playing quickly and precisely while also complaining about Rubin's slow pace of play. The notoriously slow Rubin denied the charge, but picked up a warning for slow play a couple of turns later. The good news for Rubin is that he had Circular Logic ready to stop Finkel's attempt to lock up the game with a second Squirrel Nest. With Finkel down to 6, Rubin started sending his Merfolk Looters into the red zone to keep chipping away. Finkel was really hurt by the fact that he didn't have any way to discard for free so he was forced to pay a full 3 mana for his Circular Logics while Rubin's only cost one. Despite that problem and Rubin's two Merfolk Looters (which allowed him to dig up a steady stream of creatures), Finkel was able to cling to his very last point of life just long enough to build up a horde of 8 squirrels that could kill Ben (who had tapped a bunch of pain-lands and flashed back Deep Analysis twice) in one attack phase.

Finkel started strong in game 2, with a pair of Birds of Paradise, but Rubin had the Mongrel-Arrogant Wurm draw. A pair of sideboard cards smashed into each other on Rubin's next turn as Gainsay countered Unnatural Selection. Finkel then untapped and went to smash Arrogant Wurm with Flametongue Kavu. Rubin had the Logic he needed to stop it. Finkel's second Flametongue resolved, but by then it was too late. He was at 6 and he couldn't block all Rubin's Mongrels. Centaur Garden meant even a lowly Basking Rootwalla could deal the fatal blow. Finkel drew his last card and then quickly picked up his cards and started shuffling for game 3. 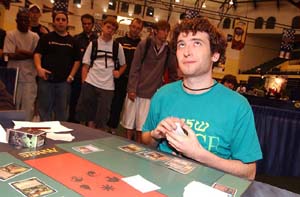 Finkel came roaring out of the gate with two Birds and a Merfolk Looter on his first two turns, but Rubin had the sideboard card he needed: Unnatural Selection. Finkel had no way to deal with it so he had to find some way to win the game with just one copy of each of his creatures in play. His Squirrel Nest was reduced to a 4-mana 1/1 (plus the ability to make Rubin tap some lands). Jon rose to the challenge beautifully. He played out an additional Looter just to make Rubin waste some mana. He countered Rubin's creatures very aggressively so he could beat down with his one Wild Mongrel. A couple turns (and one Flametongue Kavu) later Rubin found himself with Unnatural Selection as his only non-land permanent while Finkel had one squirrel token, one Elf, one Bird, one Looter, and one Mongrel. Then Finkel dropped Opposition. It wasn't lock, since Rubin was still able to get the mana he needed to always kill the second squirrel, but it was plenty close enough.

Finkel's smile was out in full bloom after pulling out a really tough win. He even asked "What's your Type 2 rating, Ben?" knowing that enough composite rating points also could give Finkel an invite to Worlds.