Round 1: Jon Finkel vs. Brian Kibler 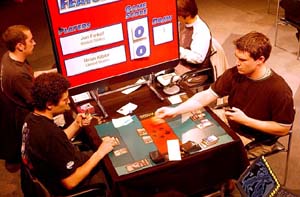 Brian Kibler has a reputation as a bit of a deckbuilder, so its no surprise that he has something special for Osaka. Flashing the contents of his deck during shuffling, he showed Shower of Coals, Haunting Echoes AND Aboshan, Cephalid Emperor. Apparently shaky mana is a small price to pay for stockpiling bombs. Across from him was no less a celebrity than Jon "Jonny Magic" Finkel himself. Finkel's distaste for heavy preparation was shown in his rather pedestrian deck choice: Mono-green beatdown.

Finkel opened with Basking Rootwalla and Wild Mongrel. Kibler slowed the assault with Aether Burst, but by his fourth turn still had not committed anything to the board. Finkel made a second Mongrel. Kibler showed him Violent Eruption in a bid to kill Mongrel and Rootwalla, but Finkel pitched Squirrel Mob and Roar of the Wurm.

Glutted with land and lacking black mana nonetheless, Kibler tried his best to appear at ease. Finkel continued to throw down threats. His Squirrel Nest met Circular Logic, but he had a second in reserve, and it stuck. Kibler drew back-to-back Violent Eruptions to take down Mongrel and Call token, but was running short on options. He held just Chainer's Edict.

Finkel took the opportunity to flash back Roar of the Worm. He had no other creatures in play and his Squirrel Nest was tapped. Kibler silently pleaded with his deck. It snubbed him, and he scooped.

Kibler really liked the look of his opening hand for Game 2. He answered Chatter and Mongrel from Finkel with Compulsion and Looter. Finkel swung in, and pitched two Rootwallas to his Mongrel. Kibler remained unfazed. He was sitting on Violent Eruption.

Finkel untapped and hit agaqin. Kibler waited. Finkel tapped all but one for Narcissism, and Kibler's Eruption wrecked him in response. Finkel's Mongrel was looking quite lonely. Kibler attacked with his Looter and played a second one.

Finkel attacked with his Mongrel, and Kibler let it through. Finkel looked at his Narcissism and Kibler's life total and started thinking. He pitched one card. He looked at Kibler. "You're at eight, right?" "Yeah." "Don't say 'Yeah' like you've got nothing Kibler. It's obvious you have it."

Nevertheless, Finkel pitched his last card and sacrificed Narcissism to try and kill Kibler. Kibler turned over Aether Burst. He untapped and dropped Aboshan into play. He used his Looters to lock down Finkel's mana, and made a Psychatog. Next turn he attacked, tapped Finkels blockers and pitched to Psychatog to kill him.

Finkel had no play on either of his first two turns, giving Kibler a big edge. Third turn he dropped Call of the Herd, and Kibler answered with Psychatog. Finkel came back with a second Call and Chatter of the Squirrel.

Kibler held back and Finkel swung in, only to watch Violent Eruption and a pitched Upheaval destroy his team. Not only that, but Kibler had one island left to cast Circular Logic on Finkel's Squirrel Nest.

Kibler made another Psychatog and emptied his graveyard to kill Basking Rootwalla. Finkel tried to keep things going with Still Life, but it was too late. Kibler untapped and slammed Aboshan into play. The big legend made sure Finkel would never attack again. He tried to slow Kibler by casting more and more creatures in a bid to find more Still Lives, but Aboshan would not be denied. Kibler soon swung for the win.

Shaking Kibler's hand after the match, Finkel said "My plan of you not drawing Aboshan did not succeed."