Round 1: Jon Finkel vs. Tomi Walamies 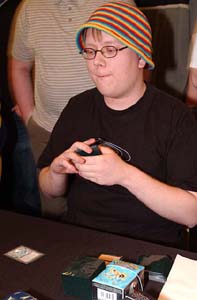 This is the first time the Masters has used the Standard format and it was quite interesting to see what the pros came up with. Battle of Wits got some serious attention and some serious crowds of spectators. Balancing Act-Terravore (with every land a sac land) also received significant playtesting. A bunch of versions of black-blue control were floating around and everyone agreed that Psychatog is great, while Nightscape Familiar was great tech for the mirror match. In the end, blue still reigned supreme in a majority of minds, but we'll find out on Sunday if the rogues or the realists were right.

Also happening on Sunday is the long-awaited Finkel-Garfield showdown with the decks they built for the Deckmasters box set!

Jon Finkel, the long-time (but former) "best player in the history of the game," spent most of Thursday wandering around the tournament sight, watching the gateway, playing a bit, and claiming that he had no deck for the Standard format Masters Series event hat started Thursday night. In the end, he elected to play a controllish blue-black-white Go-mar deck, fairly similar to the one he piloted deep into the Barcelona Masters, but now it includes Finkel's Invitational card, Shadowmage Infiltrator. His first-round opponent was Tomi Walamies, currently second in the Player of the Year race thanks to his second place finish at the most recent PT. Walamies is also playing a control deck that includes "Finkel" but his is only two colors. 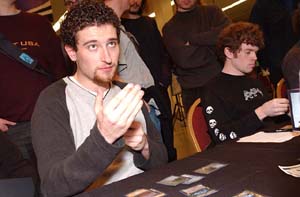 Game 1 was a savage beating. Nightscape Familiar gave Walamies a mana advantage for the entire game and he as able to keep serving with his own Finkel while Repulsing and then Memory Lapsing Jon's. Jon's Spectral Lynx just watching helplessly as Walamies sent his Infiltrator in. A pair of Probes with the kicker then cleared out Finkel's entire hand and Walamies was quickly up a game.

Finkel's "Finkel" stared across the table at Walamies' Finkel for half a dozen turns at the beginning of game 2 and then Walamies started a fight during Finkel's end step by trying to play Fact or Fiction. Once the flurry of countermagic ended, the Fact or Fiction was countered, but Finkel was down to one card and tapped out. Walamies untapped and played Skeletal Scrying for 4. Ouch. When Walamies won the fight over his second Infiltrator, Finkel was forced to Wrath. Walamies dropped yet another Infiltrator and Finkel was forced to start trying to hard-cast the Dodecapods he had sideboarded in after getting wrecked by Probes. With Walamies drawing two cards per turn plus using his Merfolk Looter, Jon was forced to try to wade through a seemingly never-ending sea of Memory Lapses and Repulses. Walamies' second Scrying (this one for 5) didn't help Jon's cause any. I've rarely seen Finkel look so helpless. Jon kept his cool and made life as difficult for Tomi a possible, and Tomi was drawing cards faster than he was dealing damage, but in the end Walamies finally managed to get through a 20th point of damage when he had one card left in his library.