Round 1: Kai Budde vs. Allan Shuldiner 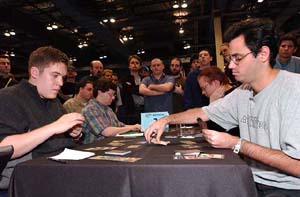 Allan Shuldiner achieved something phenomenal today: He became the first amateur to grind into the Masters. With the invitations shifting from rating to Pro Points, it only made sense to offer Gateway qualifications based on rating. Shuldiner was here this weekend courtesy a Qualifier victory and decided to run it. Now he's two thousand dollars richer and within reach of more.

His first opponent in the big event? None other than the Winningest Man in Magic. For all his success on the tour, recently feathered by a repeat Team PT win at Boston, he has been unable to do well in singles Masters competition. He's looking to turn things around today.

Shuldiner won the die roll and chose to play first. Neither he nor Budde made a move until turn three. Shuldiner went for Gustcloak Harrier. Budde matched with a morph. Shuldiner hit and made Nantuko Husk. Budde swung back. Shuldiner though for a second, then traded. Budde dropped Wirewood Savage.

Shuldiner's only reply was a Battlefield Medic. The Savage hit for two and Battering Craghorn earned him a card. Shuldiner tried Severed Legion, but when it blocked the incoming Wirewood Savage it fell to Wirewood Pride. He tried a morph, but Budde had Solar Blast. Then he drew a card from Treespring Lorian. Then he drew one for Shuldiner's Prowling Pangolin. Then he untapped and drew for his turn.

All three were lands. From the outside his position seemed indomitable, but with a grip of forests and Primal Boon, things were not as great as they could be. Budde chose to swing in with all his monsters. He ended up trading Wirewood Savage and Primal Boost for Battlefield Medic and Prowling Pangolin. Shuldiner was at seven. Budde had eight power of guys on the table. Not bad at all. Even with Shuldiner's Harrier having flown over for two every turn.

Shuldiner showed the second Pangolin. Naturally, Budde's deck served up forest. He hit, trading Lorian for Pangolin, and knocking Shuldiner to four, but things were dicey. Decidedly so when Shuldiner had Daunting Defender and Misery Charm to buy time, and then Gustcloak Skirmisher to outrace in the air. Budde drew Wave of Indifference, and scooped. He had drawn fourteen of eighteen lands.

Budde made a face at his opening hand for Game 2, but chose to keep. He had a Shock for Shuldiner's Battlefield Medic, and then a morph. Shuldiner matched him. Budde swung in and turned over Snarling Undorak when Shuldiner blocked, costing him what turned out to be Daru Healer. So far, so good. He hit for three more. 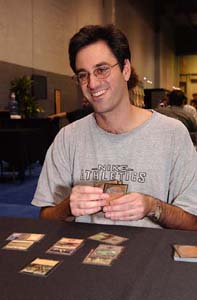 Unfortunately, his next morph (a Lorian) was answered by Prowling Pangolin, and now he wasn't drawing the mana he needed. Instead of a sixth land he got Flamestick Courier. Between Wave of Indifference and Searing Flesh, he could win this race. That is, if he drew the lands. Shuldiner turned his Pangolin sideways. Budde thought hard. His third card, Vitality Charm, soaked up six damage. Shuldiner busted out Daunting Defender.

Budde drew Wirewood Herald. The Undorak turned and dealt four when it went unblocked. The Herald got ready to chump. Shuldiner looked at his board and swung again. The Herald served up a Wirewood Elf. Shuldiner Pacified the Undorak, Misery Charmed his Daru Healer, and played it face-down. Budde readied another chumpblocker and hit for four. Shuldiner brought him to eleven and played Severed Legion.

Budde surveyed his options and frowned. He went for the narrow percentage play of hoping for his seventh land for Searing Flesh. Wave of Indifference pushed through four more damage, leaving Shuldiner at nine. Shuldiner obliged by attacking with all his creatures, meaning his facedown Daru Healer couldn't uncover to prevent damage. What's more, Shuldiner was swinging for thirteen, so the Healer wasn't really helping on offence, since Budde was chumping Pangolin with Wirewood Elf.

Of course, there's no justice for Budde, since this is the Masters after all. He drew Battering Craghorn, and extended the hand.