Round 1: Kai Budde vs. Jon Finkel 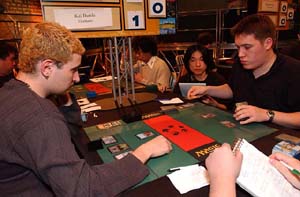 I don't remember ever hearing such a collective gasp at a Pro Tour before this first round pairing of Shadowmage Infiltrator and Voidmage Prodigy. Even seasoned veterans like Mark Rosewater and Aaron Forsythe were awed by the crowd's reaction—keep in mind that there is barely anyone here this early in the morning who is not playing in this event.

As they sat down and began shuffling, Kai made small talk with the man he recently passed on the leader board of all time earnings.

Kai: "So who did you steal you deck fro—I mean who did you playtest with?"
Jon: "Mikey P. He didn't want to give it to me either! I literally did no playtesting for this event until a couple of days ago. I have a good deck though..."

Both players were running very similar Reanimator or Godzilla decks with U/B mana bases. Jon's deck, "The Don" was running Phantom Nishoba, three Verdant Force, Rorix Bladewing, Visara the Dreadful, and the epynonomous Petradon. He was relying on four each of Reanimate and Exhume with two copies of Life/Death for good measure. Jon's deck relied on Careful Study, Hapless Researcher, Entomb, and—in a pinch—Recoil to get his fatties into the bin. Vampiric Tutor and Duress rounded out the deck.

Kai's deck was slightly different. He did not have the Hapless Researcher, Life/Death, or Recoil. His suite of fatties was also different. In addition to Visara and a singleton Verdant Force, Kai had Thrashing Wumpus, Gilded Drake, Wonder, and—as a foil to the Gilded Drakes anticipated in the mirror—Multani, Maro Sorcerer. Kai also had four Duress and even more hand disruption in the form of Mesmeric Fiend.

Kai: "Good luck to you."
Jon: "Good lu—Actually I hope you get mana screwed!"

Kai won the roll and both players kept their initial set of seven cards. Kai laid a Polluted Delta and immediately went looking for an Island to power up Careful Study. He discarded Multani and a Swamp. Jon played a Swamp and Duressed the German Juggernaut and saw Careful Study, Memory Lapse, Entomb, Exhume, and a Swamp. Jon took the Exhume.

Kai played his second land and passed the turn back to Jon. Jon cast reanimate targeting Kai's Multani to draw out the Memory Lapse and Kai kindly obliged. Kai cast his Careful Study on the next turn and discarded two Entombs. He had found a Reanimate and brought the untargetable monster into play for the meager price of a single black and six life. Jon could hardly believe this turn of events and drew his Reanimate and sent the turn back to Kai and braced for a 7/7 Multani.

Kai attacked with the monster and Jon tried to get a creature into his yard by recoiling his own land and discarding the Petradon. That part of his plan was successful but Kai had drawn another Reanimate and paid EIGHT life—going to five—to leave Jon with no lands staring at a 5/6 and the Multani. 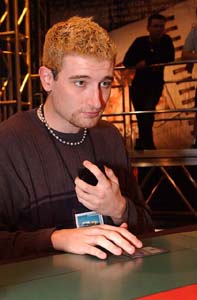 Kai: "The turn you Recoiled... I just drew the Reanimate."

Both players sided in Gilded Drakes—Jon brought in three and a Life/Death, taking out all four Exhumes, which can be tricky in the mirror. Kai brought in a second Gilded Drake as well as Llawan, Cephalid Empress, two Cabal Therapy, and a Coffin Purge. Kai did not take his Exhumes, rather an assortment of single cards from throughout his deck.

Jon had to mulligan an opening and with Rorix, Life/Death, and Duress because he was holding only Islands. Of course, the next card would have been Underground River but Jon couldn't afford to take that chance. His next set of six was four land, Careful Study, and a Life/Death. He kept it an used the Study to dig two deep into his deck. He discarded two land but he found a Reanimate—hopefully creatures were soon to follow.

Kai had the first turn Duress and was skeptical as he reread Life/Death.

Kai could only shrug in agreement but he nabbed the Reanimate with his discard spell. Neither player had any action on turn two with both players merely laying lands. Hapless Researcher made its constructed Pro Tour debut on Jon's third turn and Vampiric Tutored for Entomb during his EOT. Kai Entombed and Reanimated a Multani. Jon bluffed a counter making Kai wait a moment before it resolved but he had nothing.

Jon sacrificed his Hapless Researcher and discarded Swamp. He played another sac'd it and discarded another land. Finally, he was forced to Death a researcher into play to chump block. Kai cast Mesmeric Fiend and stole his Reanimate. 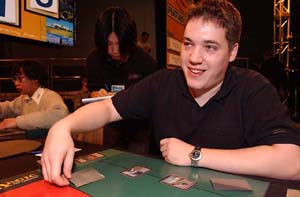 Jon had nothing on the next turn and Kai beat him down to seven during his next attack step. Jon drew a futile Duress and Kai—who was holding Gilded Drake and two Careful Studies—Vampiriced in response. Jon wanted to take the Gilded Drake and failing that wanted to take the Island that he suggested was resting on top of Kai's library. He had to settle for one of the Careful Studies. Jon threw the helpless Researcher in the way and dug one card deeper finally discarding an animal in the form of Rorix but it was too little, way too late.

Jon: "Thanks for kicking my ass!"

Kai and Jon discussed the differences in their decks, specifically the Maro Sorcerer and the Researchers.

Kai on Multani: "You need something untargetable because of all the Gilded Drakes. We didn't actually have him until a couple of days ago."