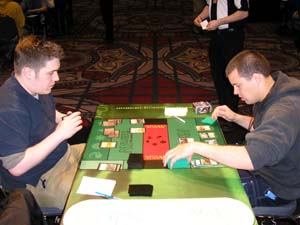 Budde (left) and Sonne matched up in Round 1.

"I heard you smiled this morning," I told Kai, as he was sitting down at the Feature Match table. The German Juggernaut is notoriously frowny, particularly the morning of Pro Tours.

"Yeah, but I wasn't smiling when I saw this pairing," quipped the Juggernaut. "You know draws are really bad in this format?" asked Kai, directing his question to opponent Jon Sonne, known as one of the more deliberate players on the Tour. Kai's comment makes one wonder exactly how much time this weekend will be wasted simply waiting for an opponent to resolve his Sensei's Divining Top activation.

Sonne won the coin flip and the match started off with dueling Tops for both players. Unfortunately, sometimes the Top delivers good news and sometimes it delivers bad. In Sonne's case the news was bad, as he couldn't find a second land to match the first he had on the board. Distress from Kai stole Genju of the Cedars, leaving Sonne with two Final Judgments and a Yosei, the Morning Star. A Tendo Ice Bride and Sakura-Tribe Elder slowly dug Sonne out of his mana problems, while Kai threw down an engine of his own in Journeyer's Kite.

A second Distress from Kai stole Umezawa's Jitte from Sonne. About the time Sonne found his fourth land, Budde was rawdogging Ink-Eyes into play. A Sakura-Tribe Elder slowed the beats for a turn, but things began to look grim for the American when Budde resolved a Cranial Extraction, naming Final Judgment and leaving Sonne with only a Yosei in hand.

Yosei entered the fray for Sonne, and then Time of Need fetched Kodama of the North Tree for the TOGITer as well, giving him a leg up in the race -- in spite of Budde seemingly having the better end of the play thus far. Kai still had some game though, casting Yukora, the Prisoner and then attacking with Ink-Eyes. Sonne let the ninja through unopposed, and with damage on the stack Budde cast Hero's Demise on Yosei, netting himself a sexy white dragon in the process, but leaving him very vulnerable for a turn.

Sonne used another Time of Need to get Meloku, but scooped up his cards when Kai flashed him a Night of Souls' Betrayal and it was on to Game 2. 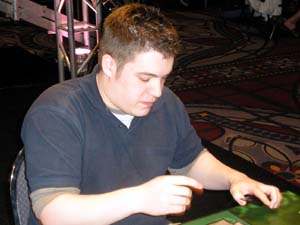 Budde raced out to a quick victory.

The second game kicked off with a Kodama's Reach and two snake weenies for Sonne and Yukora for Kai, trumped back by a Yosei from Sonne. Eradicate made sure Yosei died and all copies of the white dragon dissipated with it. Shizo, Death's Storehouse made certain that Sonne wouldn't be blocking Yukora any time soon, forcing Sonne to cast Final Judgment to remove the big demon from the game.

Kai brought his Brainstorm-like engine online after that turn, casting a Top to join the Kite already in play, and giving him a chance at an extra land and a peek at three new cards each turn. Yukora number two quickly followed, as did Final Judgment number two from Sonne. It was the last fatty that did in Sonne though, as Kai's deck coughed up Yukora number three, while Sonne's deck pooped out on him.

It's interesting to note that for the first time in quite a few Pro Tours, it looks like Kai has a very strong Constructed deck. Plus, he now has at least $100 in his pocket to boot, thanks to the Philly Payout system.