Round 1: Kai Budde vs. Zvi Mowshowitz 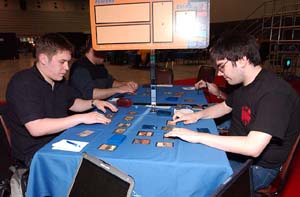 Among men who don't need introductions, Budde and Mowshowitz are near the top of the list. Virtual household names, their résumés speak volumes about their skill. These two giants sat next to each other in the first draft, with Budde feeding Mowshowitz. Unfortunately for him, Mowshowitz cracked some hits and was give the hookup of two Cruel Revivals in the second pack. His black-red deck is very good. Budde is running a mostly-green elf deck, backed by some seriously big butts.

Mowshowitz won the right to play first and started with Withered Wretch and Nosy Goblin opposite Budde's board of Birchlore Rangers and Gempalm Strider. Budde dropped a morph, and Mowshowitz decided to crack it, revealing it to be a Spitting Gourna. He made a morph of his own.

Budde's Rangers and Strider helped power out Spitting Gourna on turn four. Mowshowitz answered with Sparksmith. Budde continued the march of big men with Needleshot Gourna. Mowshowitz answered in a big way with Goblin Sledder and Deathmark Prelate, shooting down the Strider with the 'Smith. Budde drew a land, leaving him with just Primal Boost for action.

He smashed in with his two biggies, dropping Mowshowitz to nine. Mowshowitz hit back for two and sat on his mana. Budde brought the noise again. This time Mowshowitz chumped the Needleshot with the Sledder and doubled up on the Spitting Gourna with Withered Wretch and Prelate. Budde let damage go on the stack and rescued his Gourna with Primal Boost. Mowshowitz saved the Prelate with Sledder. 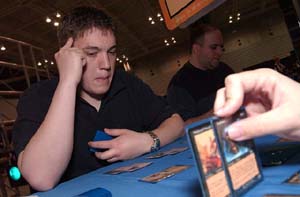 On his turn Mowshowitz assassinated the Needleshot with the Prelate. Budde sent the Gourna and earned a chump block from Sparksmith, who took down the Rangers on his way out. He added Wirewood Hivemaster and a morph to the table. Mowshowitz hit the Gourna with Pinpoint Avalanche and was done. Budde drew Treespring Lorian and put it into play. Mowshowitz dropped his seventh land and started tapping. Budde just shook his head.

Sure enough, Imperial Hellkite hit the table for the American. Budde swung all out, but after Mowshowitz blocked sanely he scooped up his cards.

Mowshowitz had a quick start in the second game, with Goblin Grappler and Wretched Anurid. Budde's first play was a morph on turn three. Mowshowitz hit for three and played one of his own. He was happy to trade when Budde sent his. Budde had no fourth land, and had to content himself with a Wirewood Savage. Mowshowitz dropped Withered Wretch. Budde finally found a land and played his one sideboarded card, Symbiotic Elf. 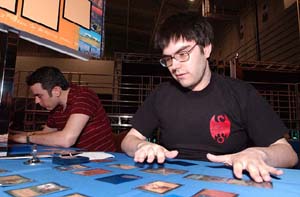 Mowshowitz played out Goblin Burrows and sent his team, provoking the Savage and trading his Wretch for the Elf. The pain from the Anurid was keeping things close. Budde hit for one and dropped Totem Speaker. Mowshowitz was ready with Cruel Revival, bringing back his Wretch. Budde's insect spared him three damage. He tried again with Hystrodon, but Mowshowitz had Revival number two.

Needleshot Gourna managed to stay on the table, but Mowshowitz took the game in a different direction with Anurid Murkdiver. Budde made an uncharacteristic error, forgetting to play his creatures before swinging with his Gourna. Mowshowitz naturally sent his Wretched Anurid to the graveyard. The German could take some solace in the fact that the error didn't cost him. He had no solution to the Murkdiver.