Round 1: Kazuo Imura vs. Masahiro Nose 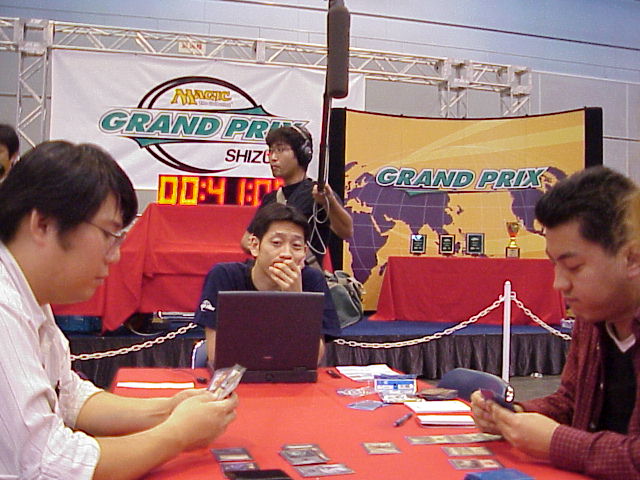 While the stars of the game drink their cocktails and sit on three free match wins, the lesser greats have to struggle through a full day's work. Such is the fate of our first two featured competitors. Kazuo Imura placed in the Top 32 of the most recent Japanese Nationals. His opponent is Masahiro Nose.

Imura won the opening RPS and chose to play. Nose hit the board first with Cabal Inquisitor and Zombie Cannibal, quickly dwarfed by Imura's Twigwalker. Imura kept up the beats with Krosan Avenger. Patriarch's Desire took it down, and now they were racing two damage apiece. Nose's Scorching Missile put him ahead.

Nose pressed his advantage with Ghastly Demise on the Twigwalker. Imura came back with Crashing Centaur, but Nose floored him with Savage Firecat. Imura desperately searched for options.

He settled on sending Firebolt direcly at Nose, and reclaiming it with Anarchist. The Firecat hit him for seven. He untapped and added a Wild Mongrel to his team. For some reason, Nose refused to send the Firecat again. Imura made him pay for his reticence with Call of the Herd. Again Nose held back. Springing Tiger further complicated his situation. It didn't help that his last three draws had been lands.

Finally Nose cracked. He tapped four and brought out Chainflinger, reducing his Firecat to a Hill Giant. The Firebolt he knew was coming dispatched it. With the Firecat a manageable size, Imura started attacking. A double-block was foiled with Shelter. Next turn, the whole gang came in for the win.

In game two, Nose opened again with his dynamic duo of Cannibal and Inquisitor. This time, Imura outclassed them with Beloved Chaplain, followed by Twigwalker, then Pardic Firecat and an all-out assault. Nose lost his creatures taking down Twigwalker.

The reason for his desperation became clear as he stalled on three lands. Morgue Theft brought his Cannibal back to the table, but it was hardly enough. Imura added nothing to his board, so Nose's situation did not worsen, but still he felt he had no better option than to play out Sandstone Deadfall. On Imura's next attack he used it to kill the Pardic Firecat, abandoning any hope of escaping manascrew.

Imura's next play was Wayward Angel. At least it was quick for Nose.