Round 1: Ken Ho vs. Matt Ranks 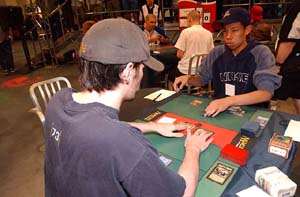 Ken Ho's been collecting some pretty large paychecks recently, and not just because they were novelty-sized. His win at Pro Tour – Osaka, followed by a finals appearance at the Chicago Masters ensured he'd have the money to follow the tour for some time. For this tournament he's chosen to run an OBC-styled Wake deck. His opponent is Matt Ranks, whom you might remember from his eleventh-place finish at Houston with Sligh. He's continuing his aggressive tendencies with red-green beats today.

Ho won the die roll boxcars to snake eyes, and led with Flooded Strand. Ranks answered with Wooded Foothills and Llanowar Elves. Ho played an island and passed it back. Ranks attempted a Call of the Herd, but Ho sent out for a second island and Memory Lapsed it. He played a plains and was done. Ranks dropped Karplusan Forest and tried again. This time it resolved.

Ho's fourth land was a Krosan Verge, forcing him to accept the beats. Ranks added a Wild Mongrel. Ho drew another card and grimaced, waiting on his Verge. Ranks's attack dropped him to eight. He searched out his lands, played another, and gave it back to Ranks, fronting the Moment's Peace. Sure enough, he had it. Ranks made another Call, still sitting on three land.

Ho again made no play, and Ranks forced him to flash back the Peace. Volcanic Hammer put him to five. He untapped, and then scooped, having drawn nothing to deal with the men on board.

Ranks had a relatively slow start for the second game, starting with Grim Lavamancer and Basking Rootwalla. Ho hit all his colors by the third turn, and was able to Lapse Elephant Guide targeting the Rootwalla. Ranks tried again on the next turn, and was thwarted by Counterspell. 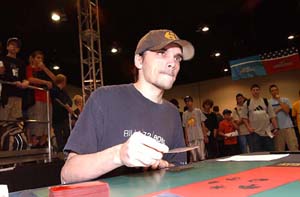 Ho was at a comfortable fourteen when he tapped out for Mirari's Wake. Ranks played a second Guide and dropped him to ten, waiting on his Lavamancer to deal two. Ho drew two off Deep Analysis and gave it back, still on five land. Ranks smashed, and when Ho showed the Moment's Peace, came back with Flaring Pain. Ho spent a Memory Lapse.

Ho didn't like his options as he untapped. He went to five to get two more cards off Deep Analysis. Kirtar's Wrath left Ranks with an Elephant. He put Ho at two and tried Violent Eruption. Ho took a point of mana burn to Logic it.

Of course, close doesn't cut it. Ho tapped five lands to summon Ancestor's Chosen and a morph, vaulting back up to eight and leaving himself a suspicious island open. Ranks tapped four and played Violent Eruption, two on the morph and two on Ho. Ho adjusted his life total to six, and Ranks made an exasperated noise.

"So there's a second ability on Mirari's Wake?" – Matt Ranks

Ho naturally flipped up his Angel and bashed in. He played another, earning the concession.

"At least he played the second Angel, so I don't have to feel so bad." – Matt Ranks

Ranks was slow off the blocks again in Game 3. He started with Lavamancer and Rootwalla, and when Ho played a Verge on turn two, hit for four and played a Llanowar Elf. Ho waited to search with his Verge, and fell to ten from Ranks's next assault. When he did Verge, he revealed that he'd drawn all his forests, and so only got a plains. That was enough, though, as he had Wrath of God in hand. 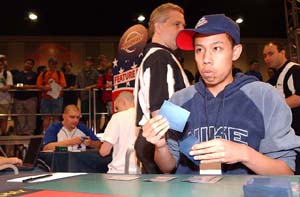 "Got another Eruption?" – Ken Ho

Ranks sat on his Lavamancer, while Ho tried to find the best course of action. Six mana bought him Exalted Angel. Ranks put him to four, threatening to take the game with a burn spell. None came. He made a Rootwalla and a second Lavamancer. Ho climbed to nine thanks to his Angel.

Ranks hit for two, and used Flaring Pain to get past Moment's Peace. Ho fell to five. He Hammered him, but Ho sent out for an island, and then Logic'd, falling to three. His Angel put him back up to eight, and Grizzly Fate at threshold left Ranks with no outs.