Round 1: A King and His Jack (A Battle of Two Roommates)

two former members of Team TOGIT were less than thrilled to be playing each other this early in the tournament. By early, I mean in the first round. And by former, I mean, well, there's a new team on the block.

Osyp and his comrades have (at least for this tournament) sworn off the TOGIT name and are going by the name of Seven Kings. Why? I have no idea. But I do know they're showing team spirit this weekend by wearing matching blue London Underground t-shirts. 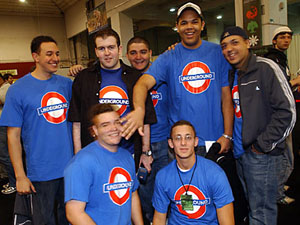 Meanwhile I was searching for a good title for this feature match.

Eugene's status with the new team is undefined as of yet. I suggested he could be a Jack, or perhaps a Queen, which led to a suggested title of "A King and His Queen." Osyp nodded, liking it, then paused, "Wait a second. That just makes us sound gay…and we're roommates?!?" Eugene just shrugged.

Osyp suggested a replacement: "Battle of the Second-Rate Pros." It came with a full back story, painting the two as players were down on their luck, on their way out, and just looking to have one last good tournament. However, a little bird soon contradicted this story and told me these two are here to stay.

At this point the judge came over and asked the two to write their names down on the feature mat. And so the match became: Eugene Harvey vs. Oscar Lebowitz of "7" Kings.

"There could be more?" Eugene asked, noting the quotation marks and perhaps hoping to ascend in status.

Osyp shook his head. "There could be less. We might kick Ravitz off." 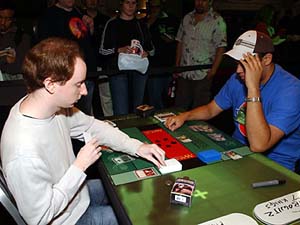 The roommates battled in Round One.

Before playing his first land, Eugene dug to get paper and a pen from his pocket. "Stalling from turn one?" came the crack from Osyp. Little did he know this match would be over far more quickly than he would like.

Eugene opened with Child of Thorns and followed with Shinen of Life's Roar. Osyp matched with Orochi Ranger. Eugene played his third land and lapsed into thought for a good minute. His eventual play: Umezawa's Jitte, your turn. Osyp couldn't believe it.

"You've got to be [fricking] kidding me you slow-rolling piece of […cardboard]," muttered Osyp.

Eugene, obviously used to his antics, shrugged and reiterated, "Go."

Osyp looked, well, pissed. And I don't mean that in the English way, although at that moment Osyp surely wished I had. He played a land and shipped the turn with three mana up, still visibly frustrated. Eugene equipped the Child, played a fourth land and swung, trading with the Orochi Ranger and dumping a couple pounds worth of change onto his Jitte. He then moved it to the Shinen, a combo that seemed rather…unfair.

[Note to anyone who plans on playing Magic in England in the future: you have to keep a close watch on your change, as it's actually worth infinite. Jon Becker lost $15 Thursday when he forgot to pick up his counters from a Descendant of Masumaro gone crazy.]
Osyp untapped and slammed down Eradicate. "This game's over, I just want to see your deck."

He reconsidered when Eugene showed a hand of a spell and two lands. When Eugene drew Brutal Deceiver the very next turn, though, he'd had enough and scooped his cards. Randy Buehler happened to walk by and caught the full brunt of an Osyp stare. "Nice card!"

Osyp sided in two Rending Vines for the Jitte and a Traproot Kami for the green mirror. 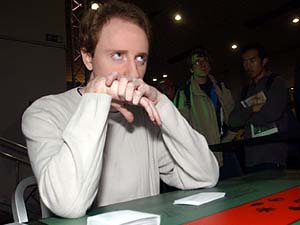 Eugene puts on his best 'putting up with Osyp' face.

"Exactly how I wanted to start my Pro Tour…playing against a friend, and he has a Jitte. Well, at least I've got a split."

He then referenced an earlier conversation about the number of Jittes they'd wanted to open in the tournament. "What were we talking about? Three, and you're guaranteed top 8? Or was it four?"

He couldn't look any more annoyed when he drew up a hand of two Swamps and five green cards, but with one of the spells being a Rending Vines and the hand having a good curve, he took a chance and kept it. It paid off when he found a Forest on turn three and summoned the ever-popular green Shinen.

Eugene starts with Gnarled Mass, then used a flurry of burn to take down both the Shinen and a fresh Okina Nightwatch. He added a Child of Thorns now that the way was clear. Budoka Pupil from Osyp was answered by a Ghost-Lit Raider from Eugene that promptly torched it at the earliest opportunity.

Kemuri-Onna was Osyp's next play, followed by a Kami of the Tended Garden that managed to stabilize the ground. At least until Eugene's Commune with Nature netted him a Sokenzan Spellblade, which promptly swung in alongside Gnarled Mass. Osyp blocked for a double trade, with Onna on the Mass and his Kami on the Spellblade, but Child of Thorns was sacrificed to save the Spellblade. Osyp had Soulless Revival to return his Onna and grab the Budoka Pupil. With his Kami also soulshifting the Shinen of Life's Roar, he now had quite the full grip.

Unfortunately for him it didn't matter. He untapped and played Moss Kami, but Eugene had a Shinen of his own. It was channeled on to a Snake token that his Orochi Eggwatcher had conveniently just hatched, and that was the game and the match.