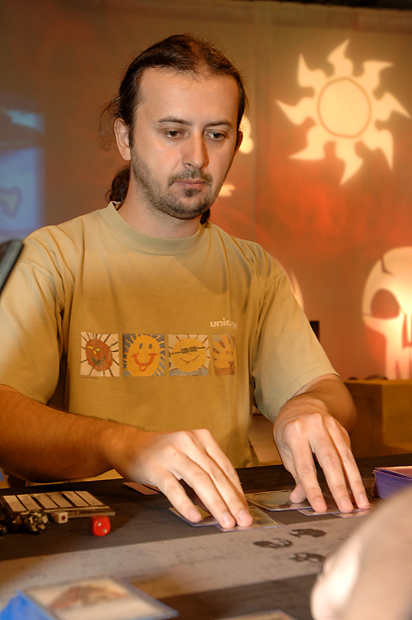 Robert Jurkovic of Slovakia does not have hot tech.

"So, do you have some hot tech?" American superstar Luis Scott-Vargas asked his Round 1 opponent as they sat down to kick off Pro Tour–San Juan.

"No," Robert Jurkovic replied, with a gallows laugh indicating he didn't like his chances. You couldn't blame the Slovakian, as Luis Scott-Vargas is arguably the best Magic player in the United States today. But both players started their path to the Pro Tour in the same place: Magic Online. Each had initially made a name for himself in the digital pantheon before moving on to success at the Pro Tour stage.

The first spell of the game was Inquisition of Kozilek for Jurkovic, which nabbed an Explore from his opponent's hand and revealed Luis to be playing red, green, and Jace, the Mind Sculptor. A second Inquisition took Comet Storm from Scott-Vargas, who was then able to resolve his Jace and begin Brainstorming.

The first creature of the game came on the fifth turn as Robert cast a Malakir Bloodwitch, his deck looking to be entirely mono-black. Luis considered the powerful play on his turn, then used Jace's Brainstorm ability before casting Oracle of Mul Daya, revealing a land on top of his library, then used Flame Slash to take out the 4/4. Robert kicked a Gatekeeper of Malakir to take care of the Oracle.

Luis reloaded, following up his dead Oracle with a new copy, and even used Jace to stack the top of his library with two lands he was able to play for free via the 2/2. When Robert tried to cast a second Malakir Bloodwitch, Luis was ready with Deprive and the Slovakian looked to be done. He had no significant offense, and Luis was "going off" with Jace, the Mind Sculptor and Oracle each turn. Before long he started slinging Sphinx of Lost Truths, drawing even more cards, and Robert was overwhelmed soon after.

Down by a game in the first match of the Pro Tour, Robert Jurkovic's day just wasn't starting off the way he had hoped. When he peeled open his hand for the second bout, it only got worse: he was short the lands he needed to cast his spells and had to take a mulligan. The American juggernaut happily kept, and the crowd held their breath to see if Jurkovic would be forced to start on fewer than six cards. He was happy with this second look, however, and play began.

Kalastria Highborn made its debut in the arena here in San Juan, batting leadoff for Jurkovic. The 2/2 didn't last long, as Scott-Vargas used Explore to accelerate out a third land, then used Flame Slash to take out the Vampire. Robert followed up with the powerful Vampire Nighthawk, which Luis answered with a second Explore / Flame Slash combo. That meant he had access to as much as six mana on his fourth turn, while Robert was on four and had just a meager second Kalastria Highborn for offense.

Lotus Cobra followed by Scalding Tarn made sure Scott-Vargas had access to all the mana he needed to cast Jace, the Mind Sculptor. Brainstorm helped set up his draws for the following few turns, and when his opponent tried to cast Vampire Hexmage, which could potentially devastate the planeswalker using its special ability, Scott-Vargas pulled the trigger on Deprive to counter.

The 2/1 Hexmage was all Robert had for his turn, and he shipped it back to Luis. The American cast a kicked Sphinx of Lost Truths, drawing an extra card by again activating the Brainstorm ability on Jace. It looked like a repeat of the first game, with Scott-Vargas's early mana acceleration allowing him to run away with it, but Mind Sludge undid much of the card advantage, knocking every single card out of Scott-Vargas's hand. Of course, with an active Jace on the table discarding your whole hand is a lot less painful, as Luis demonstrated by drawing into a Rampaging Baloths with Jace, then dropping a land onto the table to get a free 4/4 Beast out of the deal. 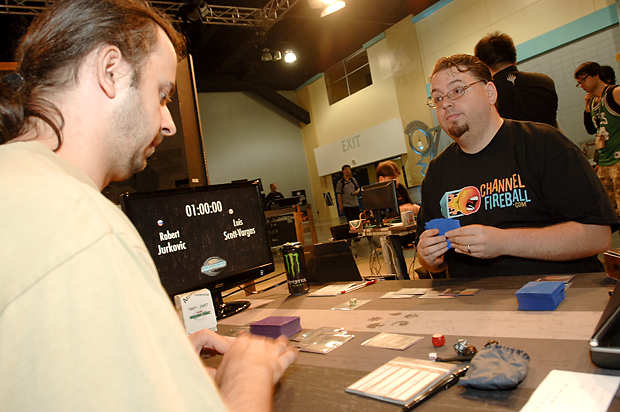 Luis Scott-Vargas gave no quarter. Nor did his Jace.

Jurkovic was reeling. His meager Kalastria Highborn wasn't a match for Scott-Vargas's increasingly large army (both in size and number). When he began activating Raging Ravine and sending it in on the attack, Robert saw that his fate in the first round of San Juan was sealed and conceded.