Round 1: Marari vs. Whine and Cheese

Whine and Cheese's Chris Cade is one of the forum moderators for the popular Magic parody site MiseTings. "I also used to write a lot of strategy articles," Chris comments. "Some people think I got Hymn to Tourach restricted in Type 2 back in 1995." 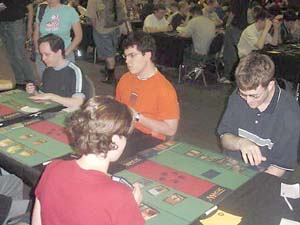 Marari boasts a Turian in its ranks. Not the famous Mike Turian who may resemble a potato, but his father Rich. Also, they have one of the only female players in the tournament: the lovely Rachel Reynolds. "I'm 0-1 lifetime versus Rachel," Tom Martell remarks from Whine and Cheese's B seat.

"Let's have some fun!" Chris remarks as the judge begins the round.

Chris is playing what appears to be a fast green deck, leading with forests and Elvish Warrior. Mr. Turian plays out a couple of swamps and a plains. Looks like Marari's B player, Mark Globus, is playing with red/green, and Rachel's staving off a black-based offensive with a red/blue deck.

Whine and Cheese ends up with Chris playing green/red, Tom playing red/blue, and Ian Spalding playing what appears to be mono-black – or maybe he just hasn't seen his second color yet!

The match looks grim from this side of the table – Chris plays Feral Throwback and reveals 2 Beasts! Rich's Clerics are falling fast to Chris' offensive might, but this seems to be the only grossly one-sided match at the table. Mark Globus is keeping pace easily with Tom's red/blue deck, as Tom sits at 14 with three creatures to Mark's two. And Rachel's match versus Ian is going well, as she handily dispatches four of his creatures, leaving her with the only offense on the table.

When Rich plays Lingering Death on the Throwback, it seems like he has a chance to get back into this game. But Chris just keeps the Beasts coming. Rich remains unflappable – we could all learn a thing or two about poker faces from this guy. Meanwhile, Rachel plays Erratic Explosion on Ian's only creature (an unmorphed morph) as Ian chants, "Miss! Miss!" No such luck, though, as Rachel reveals a Doom Cannon.

Taking a look at Rachel's match, it seems that Ian is making a miraculous comeback. He's got a thoroughly amazing bomb in a Nefashu, and when he attacks, he gives all of Rachel's creatures -1/-1. Rachel can't deal with this offense and falls soon after.

In the middle of the table, things on the ground are pretty stalled. With Lavamancer's Skill on a Mistform Wall, Tom seems to have the advantage, but he's out of cards in hand and almost out of further options.

When Rich kills Chris' Symbiotic Beast in combat, Chris ends up with four more creatures to join the three he's already got in play. Could this match possibly look more one-sided? Rich makes a particularly skillful blocking decision, leaving him with the closest thing to an advantage he's seen all game, but it seems doubtful that he'll be able to recover from Chris' early offense. Mark and Tom are playing very deliberately in the middle, knowing that the first person to make a mistake could lose the game.

After a particularly unfruitful combat phase for Chris, Rich plays a Gluttonous Zombie. Now, the momentum of the game has shifted completely, as Chris is left with only a Wirewood Herald and an insect token to stave off Rich's growing army. Chris reviews his options and finally concedes the game. "I drew 7 or 8 lands toward the end...it was very unfortunate," Chris comments.

Mark and Tom, in the middle, seem to be reaching a conclusion swiftly. Callous Oppressor takes control of Mark's Goblin Clearcutter, making that game thoroughly one-sided. "Seeing the Red Zone first time this game!" Tom says as he attacks with a couple of creatures, and Mark says, "I'll accept it!" But Mark and Tom finish quickly, as Mark plays enough green Beasts to overwhelm Tom's feeble defense.

Both Rich and Chris open with some small creatures, but the game doesn't really get going until Chris plays Canopy Crawler and reveals three other Beasts. "This could be bad," Rich says apprehensively.

"That's what I'm hoping for," Chris adds. Unfortunately for Rich, he has one morph creature in play and keeps shaking his head at the cards in his hand. He finally finds a White Knight and a Doomed Necromancer, but those may not help him much.

Rich plays a morph creature, but is forced to block with it. He flips it over, revealing Grinning Demon. When Chris plays Feral Throwback and reveals two more Beasts, Rich is in some serious trouble. Chris' Fierce Empath is making things terrible for Rich, as he contemplates blockers and shakes his head some more.

Chris makes some incredibly skillful blocking decisions, and when Rich kills his Doomed Necromancer, he brings back Grinning Demon. When Chris plays a Symbiotic Beast, Rich says, "You might as well add insult to injury!" Chris smiles and agrees. When Chris attacks and Provokes the Demon into blocking Feral Throwback, he then pumps up the Fierce Empath. Rich draws his card and then opts to concede.

The middle of the table is going pretty slowly. "This is the best Lavamancer's Skill I think I've ever seen!" Tom comments as he attacks with his enchanted Skittish Valesk. "Come on, everyone knows Valesk is a great target!" Mark's working on staying alive, as he's still at 11. But Tom keeps attacking with the Valesk and Mark can't draw enough creatures to keep up.

Mark attacks with Patron of the Wild and plays out a Spitting Gourna to keep it company. Tom's completely out of creatures, as his valiant Valesk died a few turns earlier.
Mark keeps attacking as Tom can't draw any answers, and the game ends shortly after. They won't have much time for a third game at this rate!

Game 2 between Ian and Rachel begins with Ian playing the first creature. He takes an early lead with Wretched Anurid and a morph creature, and Rachel takes a risk by unmorphing a Zombie Cutthroat. Her red removal takes over, though, and she quickly turns the tables on Ian. Rachel's takes Ian down to 10 in the second game very quickly. He's just not drawing enough creatures to survive against Rachel's speedy draws and red removal.

A few turns later, Ian still hasn't found any creatures. "Rachel, it appears you have good board position," Mark comments, catching a glimpse of her and Ian's game as he shuffles. Rachel concurs and swiftly takes Ian out, attacking with numerous creatures as he draws nothing useful. He's forced to concede shortly after.

On Mark and Tom's Game 3, Tom finds a mountain on the fourth turn. He has a couple of blue creatures in play, and they're joined by an Ascending Aven. Mark's keeping up very well, though, with a morph creature and a veritable red army. That morph creature turns out to be a Spitting Gourna, but Mark's only managing to play catch-up all game. "I missed my third land drop and he beat me down with flyers," Mark said after the match. 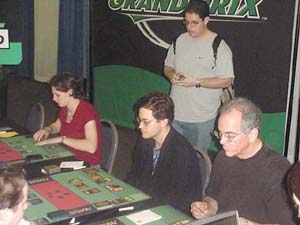 Chris and Rich are on a pivotal Game 3, where, oddly enough, nothing happens until Rich plays Grinning Demon face-down and Chris Shocks it. I guess Rachel didn't get all the red removal after all! I have to wonder where Chris' offensive Beast army is, since we're not seeing any of it this game. He does unmorph Treespring Lorian after it attacks, which is a good start, but Rich has a Screeching Buzzard that's making short work of Chris' life total.

Checking back in with Rich and Chris, Chris plays everyone's favorite Hundroog to keep up the offense. However, Rich is firmly entrenched with plenty of creatures, and when he plays Cruel Revival on Chris' Timberwatch Elf, it only serves to strengthen his advantage.

When Rich attacks with his Screeching Buzzard, Chris unmorphs a Spitting Gourna to block. Rich plays out a Daunting Defender, but is clearly displeased by this turn of events. When Chris attacks with his Chartooth Cougar, Rich spends a lot of time figuring out how best to block and not die or kill too many of his own creatures.

Chris and Rich both have no cards left in their hands. "We're both playing off the top," Chris remarks, and Rich nods assent. It seems that Chris is having better luck topdecking, as his army just keeps growing. When Chris swings with everything, Rich is at 14 with three creatures to block. He blocks Krosan Tusker with Deftblade Elite, and is still making up his mind as time is called. Rich ends up blocking the aforementioned Hundroog with a Zealous Inquisitor.

Chris grins as he plays Chartooth Cougar to join the rest of his creatures, and Rich just shakes his head sadly. "We're done," Rich says as he extends the hand. "I can't stop that."